Ingenious 'Flat Earth' Theory Revealed In Old Map. In 1893, Orlando Ferguson, a real estate developer based in South Dakota, drew a map of the Earth that combined biblical and scientific knowledge in a unique way. 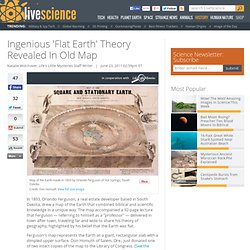 The map accompanied a 92-page lecture that Ferguson — referring to himself as a "professor" — delivered in town after town, traveling far and wide to share his theory of geography, highlighted by his belief that the Earth was flat. Ferguson's map represents the Earth as a giant, rectangular slab with a dimpled upper surface. GEMATRIA Chapter IV. The number EIGHT, which has been called the Dominical number, is found everywhere symbolically employed to convey the idea of Salvation. 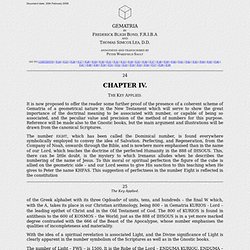 Perfecting, and Regeneration, from the Company of Noah, onwards through the Bible, and is nowhere more emphasised than in the name of our Lord, which teaches the doctrine of the perfected Humanity in the 888 of IHSOUS. This, there can be little doubt, is the mystery to which Irenaeus alludes when he describes the numbering of the name of Jesus. To this moral or spiritual perfection the figure of the cube is allied on the geometric side – and our Lord seems to give His sanction to this teaching when He gives to Peter the name KHFAS. This suggestion of perfectness in the number Eight is reflected in the constitution (H DUNAMIS MEGALH) – the title so blasphemously claimed by Simon Magus,* is 800 = KURIOS.

Satyr. The satyrs' chief was Silenus, a minor deity associated (like Hermes and Priapus) with fertility. 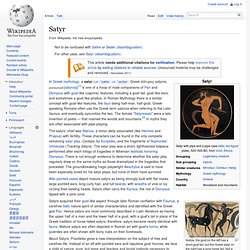 These characters can be found in the only complete remaining satyr play, Cyclops, by Euripides, and the fragments of Sophocles' Ichneutae (Tracking Satyrs). The satyr play was a short, lighthearted tailpiece performed after each trilogy of tragedies in Athenian festivals honoring Dionysus. There is not enough evidence to determine whether the satyr play regularly drew on the same myths as those dramatized in the tragedies that preceded. The groundbreaking tragic playwright Aeschylus is said to have been especially loved for his satyr plays, but none of them have survived. Attic painted vases depict mature satyrs as being strongly built with flat noses, large pointed ears, long curly hair, and full beards, with wreaths of vine or ivy circling their balding heads. Giants in the Bible. Giants in the Bible by Peter T. 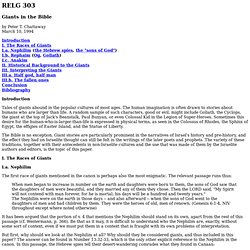 Chattaway March 10, 1994 Introduction I. Giant (mythology) Giant is the English word (coined 1297) commonly used for the monsters of human appearance but prodigious size and strength common in the mythology and legends of many different cultures. 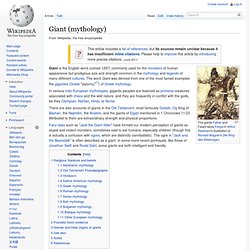 The word Giant was derived from one of the most famed examples: the gigantes (Greek "γίγαντες"[1]) of Greek mythology. There are also accounts of giants in the Old Testament, most famously Goliath, Og King of Bashan, the Nephilim, the Anakim, and the giants of Egypt mentioned in 1 Chronicles 11:23. Attributed to them are extraordinary strength and physical proportions. Fairy tales such as "Jack the Giant Killer" have formed our modern perception of giants as stupid and violent monsters, sometimes said to eat humans, especially children (though this is actually a confusion with ogres, which are distinctly cannibalistic). Giants, the Bible, & Enoch. Nephilim. Etymology[edit] 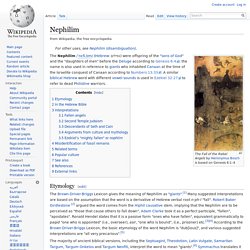 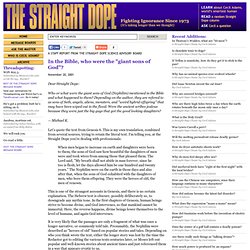 Depending on the author, they are refered to as sons of Seth, angels, aliens, monsters, and "weird hybrid offspring" that may have been wiped out in the flood. Were the ancient scribes jealous because they were just the big guys that got the good looking daughters? — Michael K. Let's quote the text from Genesis 6.

When men began to increase on earth and daughters were born to them, the sons of God saw how beautiful the daughters of men were and took wives from among those that pleased them. Theory: Nephilim were Neanderthal man. I’d like to explore the idea that the Nephilim mentioned in the bible were Neanderthal man, a distant memory, or perhaps a clan of Neanderthal that actually survived and lived in Canaan. 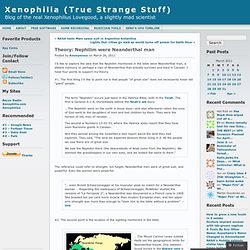 I have four points to support my theory. #1. The first thing I’d like to point out is that people “of great size” does not necessarily mean tall “giant” people. The earth is flat…really. Where are unicorns found in the Bible. Yes and no. 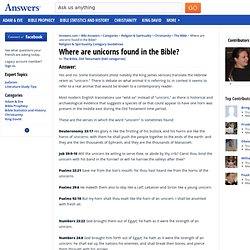 Some translations (most notably the King James version) translate the Hebrew re'em as "unicorn. " There is debate on what animal it is referring to, in context it seems to refer to a real animal that would be known to a contemporary reader. Most modern English translations use "wild ox" instead of "unicorn," as there is historical and archaeological evidence that suggests a species of ox that could appear to have one horn was present in the middle east during the Old Testament time period. Unicorns, Satyrs, and the Bible. In several different places, my Bible speaks of the unicorn and the satyr. 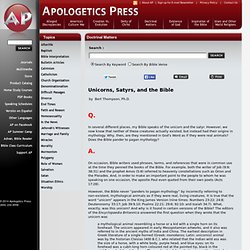 However, we now know that neither of these creatures actually existed, but instead had their origins in mythology. Why, then, are they mentioned in God’s Word as if they were real animals? Unicorn. Of the Unicorn In European folklore, the unicorn is often depicted as a white horselike or goatlike animal with a long horn and cloven hooves (sometimes a goat's beard). In the Middle Ages and Renaissance, it was commonly described as an extremely wild woodland creature, a symbol of purity and grace, which could only be captured by a virgin.

In the encyclopedias its horn was said to have the power to render poisoned water potable and to heal sickness. Unicorns in the Bible. Keywords: unicorns, Bible, animals, Job, rhinoceros, elasmotherium, aurochs, rimu, wild ox, Bos primigenius, extinct Some people claim the Bible is a book of fairy tales because it mentions unicorns. Cockatrice. A cockatrice is a mythical beast, essentially a two-legged dragon with a rooster's head. Described by Laurence Breiner as "an ornament in the drama and poetry of the Elizabethans", it featured prominently in English thought and myth for centuries. Legend[edit] Origins[edit] The cockatrice was first described in its current form in the late twelfth century. According to Alexander Neckam's De naturis rerum (ca 1180), the cockatrice was supposed to be born from an egg laid by a chicken and incubated by a toad; a snake might be substituted in re-tellings.

Cockatrice Bible, King James Version. Satyr Bible Encyclopedia: Bible Monsters. Bible Monsters This page has received a lot of attention from revealed religionists who tell me it is inaccurate. Who did Jesus pray to. By Matt Slick. Weird Stuff in the Bible. Stupid and Weird Stuff in the Bible 2004 This page is under construction, and currently in outline form (for your enjoyment).