The Myth of Pope Francis. By Andrew Stewart | 19 June 2015CounterPunch. 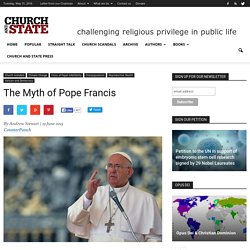 What hope does Pope Francis offer to women exposed to Zika? None. Commenting on the Zika crisis during a press conference on the papal jet, Pope Francis told reporters that abortion is “what the mafia does”, that is to say “a crime, an absolute evil”. 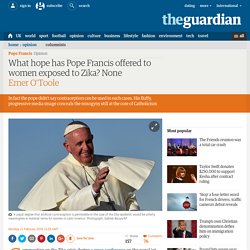 Explaining, he said, “You kill one person to save another, in the best case scenario. Or to live comfortably, no?” According to the pope, it seems, women exposed to Zika choose abortion the same way they choose sofa cushions. Of course, you’re unlikely to have read about these vicious attacks on the ostensibly murderous and materialistic motives of women who have abortions, because what the media reported instead is that Pope Francis suggested contraception could be used to stem the effects of Zika. This was widely praised as a radically liberal departure from Catholic doctrine, with the potential to improve Latin American women’s lives. Vatican: It may be a new velvet glove, but it’s the same old iron fist - Secular Europe Campaign - for universal human rights. You’ve got to give the Vatican credit for having installed a Pope who appears to be nice and cuddly and says all the right things. 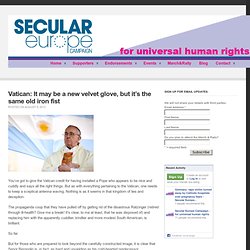 But as with everything pertaining to the Vatican, one needs to keep a sceptical antenna waving. Nothing is as it seems in that kingdom of lies and deception. The propaganda coup that they have pulled off by getting rid of the disastrous Ratzinger (retired through ill-health? Give me a break! It’s clear, to me at least, that he was disposed of) and replacing him with the apparently cuddlier, kindlier and more modest South American, is brilliant.

So far. But for those who are prepared to look beyond the carefully constructed image, it is clear that Senor Bergoglio is, in fact, as hard and unyielding as his cold-hearted predecessor. Bergoglio has just scored a big hit in Brazil where his inflated spectaculars rallied great crowds on Copacabana beach. It was very revealing. Put the kettle on, sister — and my apartment needs cleaning. He is no reformer. Pope Francis: neither a liberal nor a conservative, but a radical Christian with a heroic gospel. Pope Francis kisses the feet of the poor Pope Francis is a beguiling, confusing pontiff. 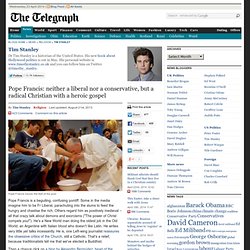 Some in the media imagine him to be Fr Liberal, parachuting into the slums to feed the hungry and chastise the rich. Others regard him as positively medieval – all that crazy talk about demons and exorcisms ("The power of Christ compels you! "). He's a New World man doing the oldest job in the Old World; an Argentine with Italian blood who doesn't like Latin. He writes very little yet talks incessantly. Pope urges 'careerists' to lead a simpler life. Latest utterance was aimed at instilling a sense of frugality and service in the Vatican and beyond By Nick Enoch Published: 16:59 GMT, 8 May 2013 | Updated: 06:44 GMT, 9 May 2013 Pope Francis said today that clergy who were 'careerists' or 'social climbers' were doing serious damage to the Catholic Church. 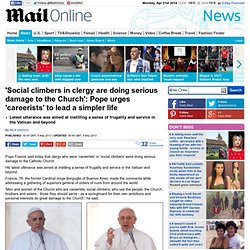 His latest utterance was aimed at instilling a sense of frugality and service in the Vatican and beyond. Pope Francis's book reveals a radical progressive in the making. In his own words, Pope Francis comes over as a clever, thoughtful and skilful mixture of social conservative and radical progressive who preaches zero tolerance of pederast priests but whose own behaviour during the terror of Argentina's military juntas remains decidedly blurred. 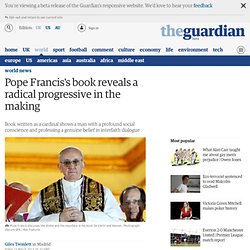 In his latest book, On Earth and Heaven, the man then known as Jorge Bergoglio, discusses the divine and the mundane with the prominent Jewish rabbi Abraham Skorka in a series of conversations published in 2010. Bergoglio appears as a man with a profound social conscience, expressing admiration of some atheist socialists and professing a genuine belief in interfaith dialogue – to the extent that some radical Catholics accuse him of heresy. He is critical of those who covered up the paedophile scandal that has done so much damage to the church he now leads. "The idea that celibacy produces paedophiles can be forgotten," he says.

Pope Francis: a man of joy and humility, or harsh and unbending? The clerical career of Jorge Mario Bergoglio, the 266th Bishop of Rome, is bookended by two joyous dates. 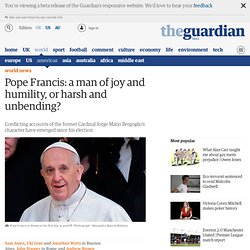 The first is 13 December 1969, the day on which the young Argentinian, on the brink of his 33rd birthday, was ordained a Jesuit priest. The second is 13 March 2013 when, at 7.06pm local time, white smoked curled into the Vatican night to confirm his surprise election as pope. But there is a third, less celebrated, date in that career, a date that has already begun to haunt the first week of Francis's papacy from a distance of almost 40 years. On the morning of Sunday 23 May 1976, more than 100 soldiers and marines climbed out of police cars and military lorries outside a church in the Bajo Flores slum neighbourhood of southern Buenos Aires and kidnapped two Jesuit priests, Orlando Yorio and Francisco Jalics.

The pair were held and tortured at the infamous Naval School of Mechanics for five months. Pope Francis has long denied the accusations. Other have been far more forthright. Pope Francis I: Papal Rule On Celibacy 'Can Be Changed' Before he was Pope Francis the man who was known as Cardinal Jorge Bergoglio spoke to Rabbi Abraham Skorka on the issue in a 2012 Spanish-language book “Sobre el Cielo y la Tierra” (“On the Heavens and the Earth”). 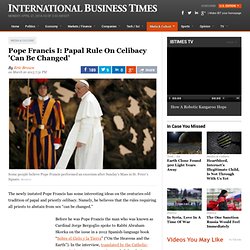 In the interview, translated by the Catholic-oriented Aleteia, Pope Francis revealed that during seminary, he was “dazzled by a girl” that caused him to consider leaving the priesthood. He also stated that the papal celibacy rule is simply one of tradition and is flexible. "I was dazzled by a girl I met at an uncle's wedding," he said, according to Aleteia. "I was surprised by her beauty, her intellectual brilliance ... and, well, I was bowled over for quite a while. I kept thinking and thinking about her. It's Pope Francis, not Francis I - John Tierney. Why not "The First"? 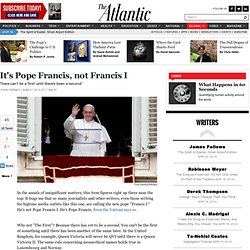 Because there has yet to be a second. Slum Priests: Pope Francis's Early Years - Haley Cohen. 'Padre Bergoglio' once recruited clergymen to minister in Buenos Aires's poor, dangerous 'villas miserias.' Residents of the Villa 21-24 slum walk past the Virgin of Caacupe chapel, where then Cardinal Jorge Mario Bergoglio (now Pope Francis) of Argentina used to give mass, in the Barracas neighborhood of Buenos Aires on March 14, 2013. 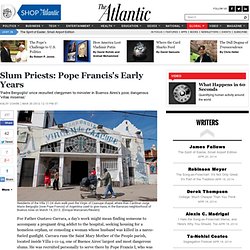 (Enrique Marcarian/Reuters) For Father Gustavo Carrara, a day's work might mean finding someone to accompany a pregnant drug addict to the hospital, seeking housing for a homeless orphan, or consoling a woman whose husband was killed in a narco-fueled gunfight. Carrara runs the Saint Mary Mother of the People parish, located inside Villa 1-11-14, one of Buenos Aires' largest and most dangerous slums. Special report: The damning documents that show new Pope DID betray tortured priests to the junta. Priest said Pope spread rumours and made him target of death squadsClaimed Pope also told regime he collaborated with guerrillasReport says priests seized by 200 armed troops, drugged, tortured and held for fives months then dumped half naked in a fieldPope Francis denies claims he was in league with the generals By Sharon Churcher and Tom Worden Published: 23:56 GMT, 16 March 2013 | Updated: 14:59 GMT, 17 March 2013 Damning evidence that Pope Francis may have betrayed two priests who were kidnapped and tortured by Argentina’s brutal military junta can be revealed today.

Pope Francis: 13 key facts about the new pontiff. What we know about Pope Francis • He likes to travel by bus. • He has lived for more than 50 years with one functioning lung. Cardinal Jorge Bergoglio becomes 266th pontiff and takes name Pope Francis. Jorge Mario Bergoglio: The first Pope from the developing world: Third non-Italian in a row shows shifting balance of power. First Pope from outside Europe in more than a milleniumHe is also the first Jesuit to be elected to the PapacyPoints to rising economic influence of Latin America By Steve Doughty. Pope Francis I: The modest son of a Beunos Aires railwayman who has only one lung. Born in December 1936 in Buenos Aires, Bergoglio is the son of an Italian railway worker He became a priest at 32, nearly a decade after losing a lung due to respiratory illnessHe was leading the local Jesuit community within four yearsIn 2010, Bergoglio challenged the Argentine government when it backed a gay marriage billHe prefers to travel on the underground and when he goes to Rome he flies economy class By Tara Brady Published: 20:34 GMT, 13 March 2013 | Updated: 23:41 GMT, 13 March 2013.