Taking gym classes abroad. Before coming to France one of my biggest worries was that I wouldn’t make French friends. 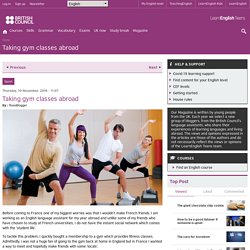 I am working as an English language assistant for my year abroad and unlike some of my friends who have chosen to study at French universities, I do not have the instant social network which comes with the ‘student life’. To tackle this problem, I quickly bought a membership to a gym which provides fitness classes. Admittedly, I was not a huge fan of going to the gym back at home in England but in France I wanted a way to meet and hopefully make friends with some ‘locals’.

This gym membership has quickly become one of the best purchases I have made since arriving in France; the benefits of going to gym classes abroad are endless! Here is a summary of how they have helped me during my year abroad so far: 1. 2. 3. 4. 5. Watching Sports in English Can Improve Your Listening Skills & Vocabulary - Profesor Inglés - by Autumn. Everyone has something to say about what is the best way to improve language learning. 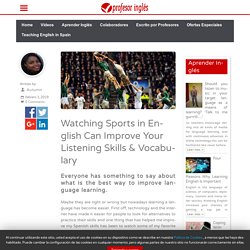 Maybe they are right or wrong but nowadays learning a language has become easier. First off, technology and the internet have made it easier for people to look for alternatives to practice their skills and one thing that has helped me improve my Spanish skills has been to watch some of my favorite sports in Spanish. I am a firm believer in finding something that you like to do when it comes to practicing another language and anyone who knows me, knows that I’m a huge sports fan. Back home, you could find me watching American Football, tennis, football, and hockey just to name a few. So, if you are an avid sports fanatic, I suggest you give it a try and you would be surprised at how much you could learn.

Why did I choose sports? They are extremely popular around the world and the majority of people love spending time watching their favorite team compete. So how exactly does watching sports help you? P.S. Is English the Lingua Franca of International Sports? “American professional athletes are bilingual; they speak English and profanity.” – Gordie Howe The Olympics have three official languages: English, French, and the chosen language of the host country (unless, of course, they speak French or English). 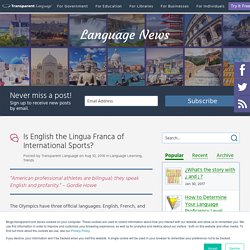 Why English and French? English may seem the obvious choice, as American broadcaster NBC owns the rights to the next umpteen Olympic Games, but it’s a bit mysterious that French edged out more widely spoken languages like Spanish and Mandarin. The reason actually has to do with the number of qualifying countries that speak each language: more competing countries claim French as their official language than any other (besides English). Et voila, all announcements and signage must be in English, French, and Portuguese this year. Image by Hal Stoelzle, posted to Flickr by nostri-imago under CC BY 2.0 How do the rest of the world’s athletes and coaches make due?

One might wonder if language use at these events even matters. The Importance of Being Bilingual in Sports - I am someone who loves to play team and individual sports like track and field. 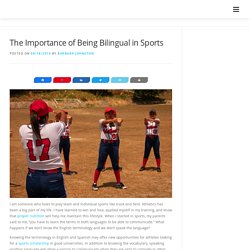 Athletics has been a big part of my life. I have learned to win and lose, applied myself in my training, and know that proper nutrition will help me maintain this lifestyle. When I started in sports, my parents said to me, “you have to learn the terms in both languages to be able to communicate.” What happens if we don’t know the English terminology and we don’t speak the language? Knowing the terminology in English and Spanish may offer new opportunities for athletes looking for a sports scholarship in good universities. Opportunities Present Themselves Upon Being Bilingual When I was in school, I participated in almost every sport offered. When I got to high school, I signed up for the softball team and was familiar with the terminology in both languages.

I registered for one of the teams outside of my school. A Mothers’s Passion Opens Doors. Learn English For Your Career in Sports. English is an important skill to have if you are looking to start a career in athletics, even if you don’t live in an English-speaking country. 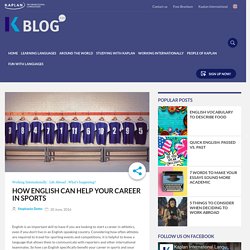 Considering how often athletes are required to travel for sporting events and competitions, it is helpful to know a language that allows them to communicate with reporters and other international teammates. So how can English specifically benefit your career in sports and your life-long dream to be a football player or an Olympic athlete? Communicate with international teammates Imagine moving away from your home country to an English-speaking continent to play a professional sport. It's a truly exciting but nerve-wracking experience. Spanish footballer and world cup champion David Villa did this very thing when he moved to Australia to play for the Melbourne City Team.

As the team captain, David needed to be able to communicate with his teammates, and they all spoke English. Communicate with fans and the media. Questions. Sport is great. Exercises (complemento video) Speaking activity.