Acacia polyacantha. Senegalia polyacantha, also known as White Thorn is a flowering tree which can grow up to 25m tall. 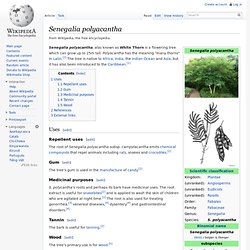 Polyacantha has the meaning "many thorns" in Latin.[2] The tree is native to Africa, India, the Indian Ocean and Asia, but it has also been introduced to the Caribbean.[1] Uses[edit] Repellent uses[edit] The root of Senegalia polyacantha subsp. campylacantha emits chemical compounds that repel animals including rats, snakes and crocodiles.[2] Acacia rigidula. Vachellia rigidula, commonly known as Blackbrush Acacia or Chaparro Prieto, is a species of shrub or small tree in the legume family, Fabaceae. 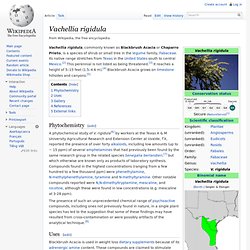 Its native range stretches from Texas in the United States south to central Mexico.[2] This perennial is not listed as being threatened.[3] It reaches a height of 5–15 feet (1.5–4.6 m).[4] Blackbrush Acacia grows on limestone hillsides and canyons.[5] Phytochemistry[edit] A phytochemical study of V. rigidula[6] by workers at the Texas A & M University Agricultural Research and Extension Center at Uvalde, TX, reported the presence of over forty alkaloids, including low amounts (up to ~ 15 ppm) of several amphetamines that had previously been found by the same research group in the related species Senegalia berlandieri,[7] but which otherwise are known only as products of laboratory synthesis.

Acacia schaffneri. Acacia schaffneri (Twisted Acacia, Schaffner Acacia) is a tree native to Mexico and the United States (Texas).[1] Uses[edit] Acacia schaffneri wood is used for fuel and fences. The wood makes very good firewood. Acacia podalyriifolia. Acacia confusa. Acacia confusa is a perennial tree native to South-East Asia. Some common names for it are Acacia Petit Feuille, Small Philippine Acacia, Formosa Acacia (Taiwan Acacia) and Formosan Koa. It grows to a height of 15 m. The tree has become very common in many tropical Pacific areas, including Hawaii, where the species is considered invasive.[2] Uses[edit] Its uses include chemical products, environmental management and food and drink. Acacia cornigera.

Mutualism[edit] Acacia ants Bullhorn Acacia is best known for its symbiotic relationship with a species of Pseudomyrmex ant (Pseudomyrmex ferruginea) that lives in its hollowed-out thorns. 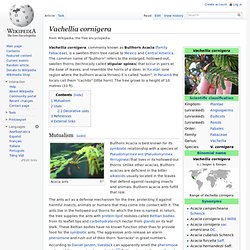 Unlike other acacias, Bullhorn acacias are deficient in the bitter alkaloids usually located in the leaves that defend against ravaging insects and animals. Bullhorn acacia ants fulfill that role. The ants act as a defense mechanism for the tree, protecting it against harmful insects, animals or humans that may come into contact with it. According to Daniel Janzen, livestock can apparently smell the pheromone and avoid these acacias day and night.[2] Getting stung in the mouth and tongue is an effective deterrent to browsing on the tender foliage. Acacia maidenii. Acacia sieberiana. Acacia sieberiana is a perennial tree native to Africa and introduced into Pakistan.[2] It is known in South Africa as the Paperbark Thorn. 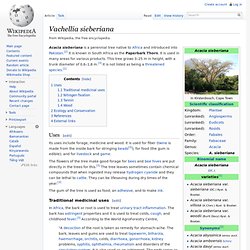 It is used in many areas for various products. This tree grows 3–25 m in height, with a trunk diameter of 0.6–1.8 m.[3] It is not listed as being a threatened species.[2] Uses[edit] Its uses include forage, medicine and wood. It is used for fiber (twine is made from the inside bark for stringing beads[3]); for food (the gum is edible); and for livestock and game. Close-up of the leaves The flowers of the tree make good forage for bees and bee hives are put directly in the trees for this.[3] The tree leaves sometimes contain chemical compounds that when ingested may release hydrogen cyanide and they can be lethal to cattle.

The gum of the tree is used as food, an adhesive, and to make ink. Acacia simplex. Acacia simplex is a perennial climbing tree native to islands in the western part of the Pacific Ocean as far east as Savaiʻi. It is also found in Argentina. This tree grows up to 12 m in height.[2] Acacia victoriae. Flowers Legume. Acacia tortilis. Vachellia tortilis, widely known as Acacia tortilis but attributed by APG III to the Vachellia genus,[3] is the umbrella thorn acacia, also known as umbrella thorn and Israeli babool,[4] a medium to large canopied tree native primarily to the savanna and Sahel of Africa (especially Sudan), but also occurring in the Middle East. 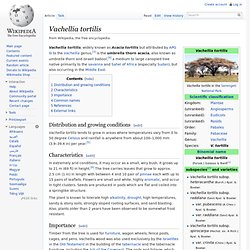 Distribution and growing conditions[edit] Vachellia tortilis tends to grow in areas where temperatures vary from 0 to 50 degree Celsius and rainfall is anywhere from about 100–1,000 mm (3.9–39.4 in) per year.[5] Characteristics[edit] In extremely arid conditions, it may occur as a small, wiry bush. It grows up to 21 m (69 ft) in height.[6] The tree carries leaves that grow to approx. 2.5 cm (1 in) in length with between 4 and 10 pair of pinnae each with up to 15 pairs of leaflets. The plant is known to tolerate high alkalinity, drought, high temperatures, sandy & stony soils, strongly sloped rooting surfaces, and sand blasting.