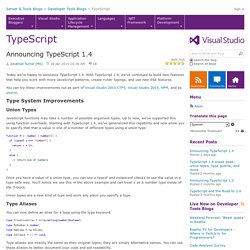 With TypeScript 1.4, we've continued to build new features that help you work with more JavaScript patterns, create richer typings, and use new ES6 features. You can try these improvements out as part of Visual Studio 2015 CTP5, Visual Studio 2013, NPM, and as source. Union Types JavaScript functions may take a number of possible argument types. Theme, a functional systems programming language.

This is a project of Jaap Weel, started originally as a class project at VU, and now transferred to the back burner. 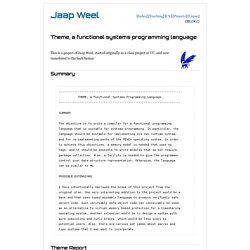 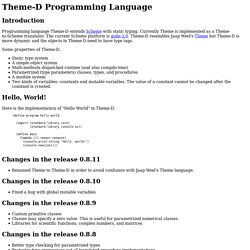 TouchDevelop. Tycho - A small extensible programming language for the .net framework. Tycho was presented at Lang.NET Symposium 2009, check out the video and slides. 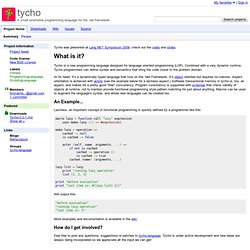 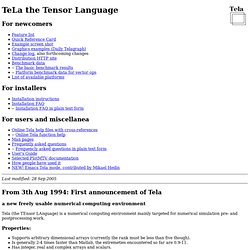 Properties: Supports arbitrary dimensional arrays (currently the rank must be less than five though). What to do with it If you have a system that is not included in the binary distributions, you should consider building it yourself from the sources and sending the image to ftp.funet.fi. Bugs & suggestions. TOY. Theme Programming Language. Announcing Topaz: A New Ruby — Topaz 0.1 documentation. Posted: February 6, 2013 I’m extraordinarily pleased to today announce Topaz, a project I started 10 months ago, to create a brand new implementation of the Ruby programming language (version 1.9.3). 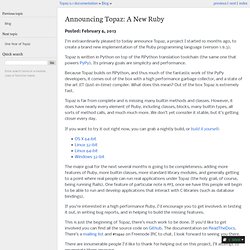 Topaz is written in Python on top of the RPython translation toolchain (the same one that powers PyPy). Its primary goals are simplicity and performance. Because Topaz builds on RPython, and thus much of the fantastic work of the PyPy developers, it comes out of the box with a high performance garbage collector, and a state of the art JIT (just-in-time) compiler. What does this mean? Topaz is far from complete and is missing many builtin methods and classes. If you want to try it out right now, you can grab a nightly build, or build it yourself: If you’re interested in a high performance Ruby, I’d encourage you to get involved: in testing it out, in writing bug reports, and in helping to build the missing features. This is just the beginning of Topaz, there’s much work to be done. TAS Professional. Welcome to TypeScript. Timber. Thorn. Talonlang.org. Taffy your friendly scripting language. 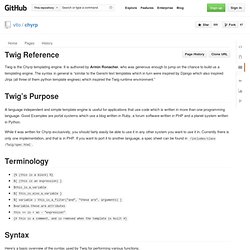 It is authored by Armin Ronacher, who was generous enough to jump on the chance to build us a templating engine. The syntax in general is “similar to the Genshi text templates which in turn were inspired by Django which also inspired Jinja (all three of them python template engines) which inspired the Twig runtime environment.” Twig’s Purpose. Twiggery Scripting Language. Download source - 945.19 KB Introduction Twiggery is a tiny but useful scripting language. 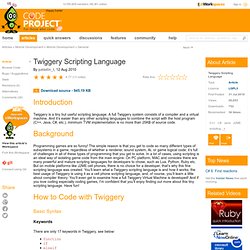 A full Twiggery system consists of a compiler and a virtual machine. And it’s easier than any other scripting languages to combine the script with the host program (C++, Java, C#, etc.), minimum TVM implementation is no more than 25KB of source code. Background. Toadskin Programmer's Reference Manual version 1.0.x. Availability You can get the latest version right here[~9k]. What is this thing? Some programming languages are fun and interesting like FALSE and BrainF**k and FeckFeck. Others are powerful and useful like colorforth. Some are evil, soul-sapping nightmares like Intercal, Malbolge, COBOL (Sorry, Grace, nothing personal) and XML. A Minimum Procedural Language. Turbo/PL² Free Windows Programming Language. 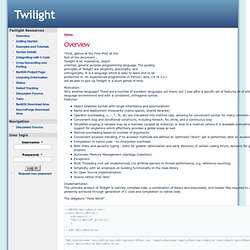 Twilight is an imperative, object oriented, general purpose programming language. The guiding principles of Twilight are simplicity, practicality, and orthogonality. It is a language which is easy to learn and to be productive in. An experienced programmer in Python, Java, C# or C++ will be able to pick up Twilight in a short period of time. Trilogy from FOLDOC. <language> A strongly typed logic programming language with numerical constraint-solving over the natural numbers, developed by Paul Voda <voda@voda.ii.fmph.uniba.sk> at UBC in 1988. 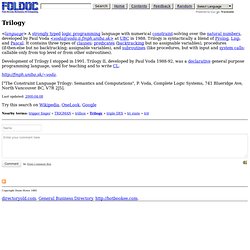 Trilogy is syntactically a blend of Prolog, Lisp, and Pascal. It contains three types of clauses: predicates (backtracking but no assignable variables), procedures (if-then-else but no backtracking; assignable variables), and subroutines (like procedures, but with input and system calls; callable only from top level or from other subroutines). Development of Trilogy I stopped in 1991. Assembler Simplified With TERSE Algebraic Assembly Language. TTCN-3 Homepage. Tempo: a declarative concurrent programming language. Steve Gregory, Rafael Ramirez, Tempo: a declarative concurrent programming language. Proceedings of the 12th International Conference on Logic Programming. ISBN 0-262-69177-9, pp. 515–529. June 1995. Tyle - Interpreter for the programming language 'Tyle' Tyle is a general programming language, but especially fit for automation, web services, and operations on textual or binary files that contain proprietary data formats.

Lambda Prolog provides this support by using lambda terms as data representation devices and by including primitives for probing such terms in logically meaningful ways. The new features present in the language raise several implementation challenges that have been addressed in collaborative work between Nadathur and his students and colleagues. The name "Teyjus" actually stands both for a project and for a class of compiler and virtual machine based realizations of Lambda Prolog arising from the research carried out within this project. Tom. TOL-Project. Trad4 - parallelise your problems. Tie C# statement/expression interpreter. Turtle Logo (programming language) for Kids. Trith: Recombinant Programming. Tsunamiprogramm. Welcome to the TiLP web site. Tintware. TwinLisp Home. Welcome to Thyrd. Thistle Home Page. Thistle-Win Update October 17, 2005 Update, October 17, 2005 Added to Thistle-Win v1.4: Added ability to export assembly code.