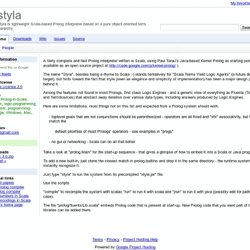 The name "Styla", besides being a rhyme to Scala :-) stands tentatively for "Scala Terms Yield Logic Agents" (a future development target), but hints toward the fact that style (seen as elegance and simplicity of implementation) has been a major design principle behind it. Among the features not found in most Prologs, first class Logic Engines - and a generic view of everything as Fluents (TermSinks and TermSources) that abstract away iteration over various data types, including answers produced by Logic Engines. Here are some limitations, most things not on this list and expected from a Prolog system should work. Subtle Programming Language. Squirrel - The Programming Language. Speechlang.org. Solid: the language for smart web development. Slim - A Fast, Lightweight Template Engine for Ruby. Sketch-lang.org. Home · bendmorris/scotch Wiki. The Salmon Programming Language Home. S-Lang Library Information Page. Solfix. Scriptster - Home. Shiny. SNOBOL4.ORG: SNOBOL4 Resources. 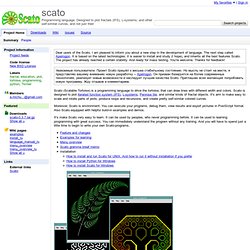 Francisco Rosales, home page. The Computer Programming Language For Kids! SheerPower 4GL Home Page. Guy T. Rice At Large. After a long period of neglect, I'm finally getting around to turning this into a presentable webpage. Over the next few days, I'll be adding the projects that were previously available here plus a few more... By reading this webpage, you hereby agree to the terms and conditions of our Standard Disclaimer . Sigil Sigil is an interpretted, object-oriented programming language.

It features a LISP-like syntax, a Self-like object model, garbage collection, exceptions, continuations, lexical scoping, optional parameter type checking, optional lazy evaluation, among other things. Sigil 0.2 source : Available under the terms of the GNU General Public License . Sigil Language Reference Manual : This is included in the above archive, but also here so you can view it without having to first download and unpack the archive above. Docgen.sigil : The language reference is automatically generated from comments in the source code. If you're looking for my old Apple II software, look here . My Software Projects.

Simple pseudo assemble. SPARCL Home, 03-05-28. CSNOBOL4. Free Development software downloads at SourceForge. SPARK. The SR Programming Language. STOICAL - STack Oriented Interactive Compiler Adapted to Linux. Sather home page. Sather is an object oriented language designed to be simple, efficient, safe, flexible and non-proprietary. One way of placing it in the "space of languages" is to say that it aims to be as efficient as C, C++, or Fortran, as elegant as and safer than Eiffel, and support higher-order functions and iteration abstraction as well as Common Lisp, CLU or Scheme. Note: Sather has now been converted to the GPL/LGPL licence. This last release from ICSI is available here . It is essentially a re-release of 1.2 beta, for the purpose of changing the licence.

Continuing development of Sather may be found at the GNU site. If you use Sather or find it of interest, send us a postcard! Www.ftgsoftware.com/manuals/basic32.pdf. Sesame Database Manager. The Scriptol programming language and development tools. ScriptBasic the ultimate scripting tool. Imagine, program, share. SCAR Divi - Shite Compared to AutoRune by Kaitnieks and Freddy1990. SABLE - Introducing Sable. SABLE is a general-purpose programming language derived from Smalltalk which runs on Microsoft® .NET and Mono1 (i.e. on the ECMA CLR). SABLE is the CLR's athletic body with Smalltalk's poetic spirit, a powerful combination of the best of both. SABLE brings the many benefits of the Smalltalk language and environments to the native CLR platform, to be a beneficial alternative to those languages based on C and BASIC.

The major features of SABLE include: an elegant Smalltalk-derived syntax, for readability and simplicity, strong typing, for correctness/validation, code completion, and fast execution, bidirectional type inference, to drastically reduce type redundancy, method-defined operators and control structures, so you can add new ones, inlined functions, called "macros", which can make existing non-SABLE libraries easier to use, class extensions, for adding to existing classes new operations (e.g. LINQ) and constants (e.g. Squeakland. SiMPLE. STELLA Programming Language. Motivation Developers of intelligent applications face a problem today, since none of the currently ``healthy'' languages such as C++ or Java provide adequate environments to support symbolic programming tasks. 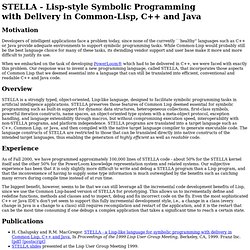 While Common-Lisp would probably still be the best language choice for many of these tasks, its dwindling vendor support and user base make it more and more difficult to justify its use. When we embarked on the task of developing PowerLoom® which had to be delivered in C++, we were faced with exactly this problem. Project Summary - Spark. SMX: Server Macro Expansion. Altran Praxis : Technology : SPARK. Spider Compiler. Sim# - A Simula compiler for .Net. Cat's Eye Technologies: The Sally Programming Language. Shen Doc. Shen and Qi Shen is directly derived from Qi. 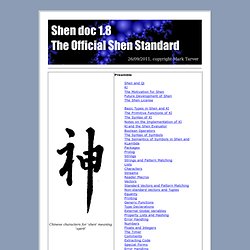 Qi is a hypermodern functional language that offers many features not currently available under other functional platforms. For an introduction to Qi see www.lambdassociates.org. Qi was written solely to run under Common Lisp. The motive for Shen came from the observation that the implementation of Qi used only 15% of the system functions described in Common Lisp: the Language.

The SML.NET compiler. SML.NET is a compiler for the functional programming language Standard ML that targets the .NET Common Language Runtime and which supports language interoperability features for easy access to .NET libraries. This web site was last updated on 02-June-06. Download SML.NET is available for download in either binary or source form. IronSapphire. IronSmalltalk. Spec# Spec# is a formal language for API contracts (influenced by JML, AsmL, and Eiffel), which extends C# with constructs for non-null types, preconditions, postconditions, and object invariants. 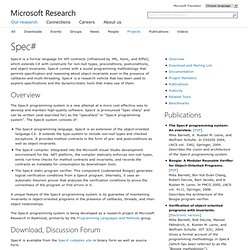 Spec# comes with a sound programming methodology that permits specification and reasoning about object invariants even in the presence of callbacks and multi-threading. Spec# is a research vehicle that has been used to explore specifications and the dynamic/static tools that make use of them. Styla - Styla is lightweight Scala-based Prolog interpreter based on a pure object oriented term hierarchy. A fairly complete and fast Prolog interpreter written is Scala, using Paul Tarau's Java-based Kernel Prolog as starting point (also available as an open source project at ). 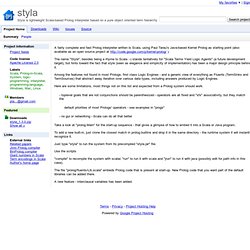 The name "Styla", besides being a rhyme to Scala :-) stands tentatively for "Scala Terms Yield Logic Agents" (a future development target), but hints toward the fact that style (seen as elegance and simplicity of implementation) has been a major design principle behind it. Among the features not found in most Prologs, first class Logic Engines - and a generic view of everything as Fluents (TermSinks and TermSources) that abstract away iteration over various data types, including answers produced by Logic Engines. Here are some limitations, most things not on this list and expected from a Prolog system should work. The Scriptol programming language and the open source project. Free Development software downloads. 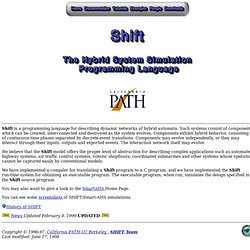 Such systems consist of components which can be created, interconnected and destroyed as the system evolves. Components exhibit hybrid behavior, consisting of continuous-time phases separated by discrete-event transitions. Components may evolve independently, or they may interact through their inputs, outputs and exported events. The interaction network itself may evolve. We believe that the Shift model offers the proper level of abstraction for describing complex applications such as automated highway systems, air traffic control systems, robotic shopfloors, coordinated submarines and other systems whose operation cannot be captured easily by conventional models. Soar. Soar News and Announcements We are pleased to announce the 34th Soar Workshop! 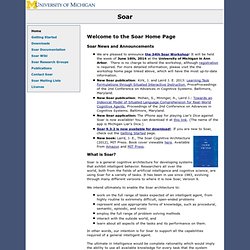 It will be held the week of June 16th, 2014 at the University of Michigan in Ann Arbor. There is no charge to attend the workshop, although registration is required. S-Lang Library Information Page. S-Lang is a multi-platform programmer's library designed to allow a developer to create robust multi-platform software. 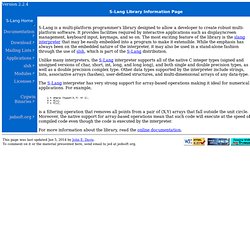 It provides facilities required by interactive applications such as display/screen management, keyboard input, keymaps, and so on. The most exciting feature of the library is the slang interpreter that may be easily embedded into a program to make it extensible. While the emphasis has always been on the embedded nature of the interpreter, it may also be used in a stand-alone fashion through the use of slsh, which is part of the S-Lang distribution. Unlike many interpreters, the S-Lang interpreter supports all of the native C integer types (signed and unsigned versions of char, short, int, long, and long long), and both single and double precision types, as well as a double precision complex type. Stackling - RPN for Mac OS X. Stackling is an advanced scriptable RPN calculator for Mac OS X.

It features the GNU Kawa Scheme interpreter which allows users to build custom functionality by way of short Scheme programs, or scripts. Stackling is licensed under the GNU General Public License, a copy of which is included with both the source and binary distributions. Screenshots, Anyone? User's perspective - full screen of Stackling with its help file Developer's perspective - full screen of Stackling and the Script Library Editor Current Version: 0.9. Scriptbasic. Superx++ Compiler and Runtime 1.1. Stackr Programming Language - Home. Scotch-lang - The Scotch programming language. Simple-interpreter - Interpreter for the Simple programming language. Scratchtab - A block programming language for Tablets. About this project A development environment prototype for Android tablets. 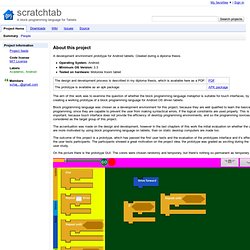 Created during a diploma thesis. Operating System: Android Minimum OS Version: 3.3 Tested on hardware: Motorola Xoom tablet The aim of this work was to examine the question of whether the block programming language metaphor is suitable for touch interfaces, by creating a working prototype of a block programming language for Android OS driven tablets. Silver - Minnesota Extensible Language Tools. The Scala Programming Language.