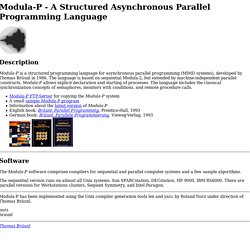 Mama - an educational 3D programming language - Eytam Robotics. Knuth: MMIX. A RISC computer for the third millennium (Click here for the latest news about MMIX) Thirty years have passed since the MIX computer was designed, and computer architecture has been converging during those years towards a rather different style of machine. 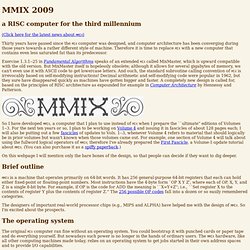 Therefore it is time to replace MIX with a new computer that contains even less saturated fat than its predecessor. Exercise 1.3.1--25 in Fundamental Algorithms speaks of an extended MIX called MixMaster, which is upward compatible with the old version. But MixMaster itself is hopelessly obsolete; although it allows for several gigabytes of memory, we can't even use it with ASCII code to get lowercase letters. So I have developed MMIX, a computer that I plan to use instead of MIX when I prepare the ``ultimate'' editions of Volumes 1--3. On this webpage I will mention only the bare bones of the design, so that people can decide if they want to dig deeper. Brief outline. MoonScript, a language that compiles to Lua. Muesli: Multiple Utility, Evaluation and Scripting Language Interface. Muesli is a library to interface an application to multiple programming language evaluators (normally, interpreters). 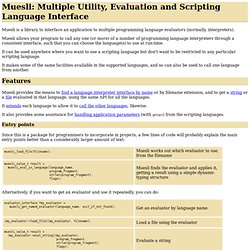 Muesli allows your program to call any one (or more) of a number of programming language interpreters through a consistent interface, such that you can choose the language(s) to use at run-time. It can be used anywhere where you want to use a scripting language but don't want to be restricted to any particular scripting language. It makes some of the same facilities available in the supported languages, and so can also be used to call one language from another. Features Muesli provides the means to find a language interpreter interface by name or by filename extension, and to get a string or a file evaluated in that language, using the same API for all the languages. It extends each language to allow it to call the other languages, likewise. It also provides some assistance for handling application parameters (with getopt) from the scripting languages. 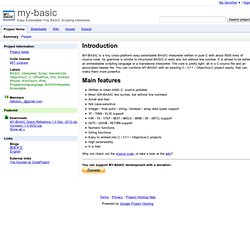 Its grammar is similar to structured BASIC in early era, but without line number. It is aimed to be either an embeddable scripting language or a standalone interpreter. The core is pretty light; all in a C source file and an associated header file. Mo+ Home. Welcome to Monte’s documentation! — Monte 0.1 documentation. The MPD Programming Language. Greg Andrews Gregg Townsend Department of Computer Science The University of Arizona These web pages and associated software are no longer being maintained. You are welcome to browse and download, but no support is available. MPD is a new programming language that has a syntax very close to the one used in the book Foundations of Multithreaded, Parallel, and Distributed Programming.

The name of the language comes from the first three letters of the main words of the title of the book: Multithreaded, Parallel, and Distributed. A model oriented programming language and IDE for model driven development - Home. Free Development software downloads. Will Thimbleby » Blog Archive » MISC: An experimental LISP-like language.

MISC has been a long time in the creation. 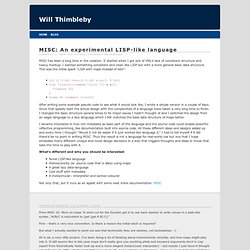 It started when I got sick of XML’s lack of consistent structure and heavy markup. I wanted something consistent and clean like LISP but with a more general basic data structure. This was the initial spark “LISP with maps instead of lists”. [if [> 5 10] then:[+ 5 10] else:[- 5 10]] [let '[square:[lambda '[x:1] '[* x x]]] '[square 12]] [take 20 [numbers from:0]] After writing some example pseudo code to see what it would look like, I wrote a simple version in a couple of days. I became interested in how rich metadata as basic part of the language and the source code could enable powerful reflective programming, like documentation built into source code. What’s different and why you should be interested:

MCPL. MCPL is a simple typeless language which is based on BCPL. It makes extensive use of pattern matching somewhat related to that used in ML and Prolog, and some other features come from C. An MCPL manual is available by clicking on mcplman.pdf. An interpretive implementation of MCPL has been developed in a style similar to the BCPL Cintcode implementation. It currently works well enough to run several demonstration programs. Experimental native code versions for Linux and the DEC Alpha are included as part of this distribution. Free Distribution These implementations of MCPL are available free of charge for private and academic purposes.

The sizes and dates of creation of these files can be found in FILES. In order to compile MCPL programs you will need a recent version of the BCPL Cintcode System. This distribution is new and still under development. My home page. MDK. The ML/I macro processor. MacroX - Save time with automation. Maude. Misc Engine - About.

Misc is a programming language designed especially for performing calculations on large amounts of data. The Misc Engine library is a portable C++ library containing Misc compiler, interpreter and standard built-in functions. The main purpose of Misc is to serve as a base engine for other applications. Free Development software downloads. m80 : Main / Home Page. Mobile BASIC - The easy way to create mobile phone applications. We have been developing Mobile Phone Programming Solutions based around the BASIC Programming Language since 2002. Mobile BASIC originally started out as an application for J2ME Mobile Phones and it enabled you create your own software directly on the phone without the need for a PC.

This resulted in a suprisingly flexible platform and enabled you to write software that used Graphics, File I/O and even facilities to access Internet Services from with your BASIC program. More recently we have developed Mobile BASIC 1.1 for Android Phones and Tablets. Devedzic.fon.rs/publications/IEEESoftware2010.pdf. Magpie Guide: Welcome. Gardens Point Modula-2 (GPM/CLR) Monate - Object Oriented Assembly. Monkeyspeak. Mini Compiler. A Taste of MicroScript. Steven J. Searle Web Master, TRON Web Three Types of Programming in the World of BTRON One of the most innovative personal computing architectures developed to date is the BTRON-specification architecture, which is one of the subarchitectures of the "total architecture" known as the TRON Architecture.

BTRON was conceived in the mid 1980s as an architecture for networked users in a networked world long before the Internet became accessible to ordinary people. BTRON-specification operating systems, which have already been commercialized in the form of several subsets in Japan, are equipped with various types of software that enable users to perform the three types of communication mentioned above. However, unlike HyperTalk, which disappeared from the scene many years ago, MicroScript is also employed as a development tool by professional BTRON programmers, who it aids in two ways. MicroScript Based on Powerful System Resources Creating a Simple MicroScript Program Now comes the unique part. 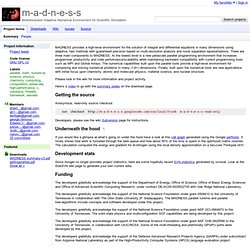 There are three main components to MADNESS. At the lowest level is a new petascale parallel programming environment that increases programmer productivity and code performance/scalability while maintaining backward compatibility with current programming tools such as MPI and Global Arrays. The numerical capabilities built upon the parallel tools provide a high-level environment for composing and solving numerical problems in many (1-6+) dimensions. Finally, built upon the numerical tools are new applications with initial focus upon chemistry, atomic and molecular physics, material science, and nuclear structure. Please look in the wiki for more information and project activity. 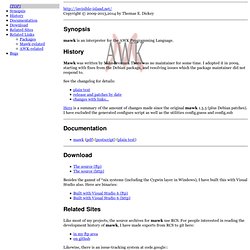 Dickey Synopsis mawk is an interpreter for the AWK Programming Language. History Mawk was written by Mike Brennan. See the changelog for details: Here is a summary of the amount of changes made since the original mawk 1.3.3 (plus Debian patches). Documentation. GNU Modula-2. The Mocosel Community. MetaL - MetaL: An XML based Meta-Programming language. 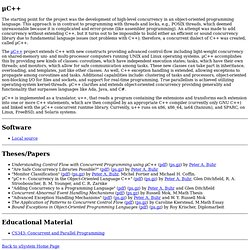 This approach is in contrast to programming with threads and locks, e.g., POSIX threads, which deemed unreasonable because it is complicated and error-prone (like assembler programming). An attempt was made to add concurrency without extending C++, but it turns out to be impossible to build either an efficient or sound concurrency library due to fundamental language issues (not problems with C++); therefore, a concurrent dialect of C++ was created, called μC++. μC++ is implemented as a translator, u++, that reads a program containing the extensions and transforms each extension into one or more C++ statements, which are then compiled by an appropriate C++ compiler (currently only GNU C++) and linked with the μC++ concurrent runtime library. Currently, u++ runs on x86, x86_64, ia64 (Itanium), and SPARC, on Linux, FreeBSD, and Solaris systems. The Mercury Project: Introduction. Mirelle Scripting Language. Mirah.