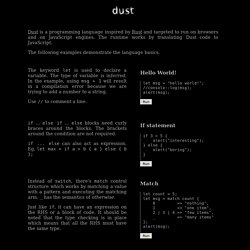 The runtime works by translating Dust code to JavaScript. The following examples demonstrate the language basics. Dust → JavaScript Hello World! Let msg = "hello world! " The keyword let is used to declare a variable. Use // to comment a line. If statement if 3 > 5 { alert("interesting"); } else { alert("boring"); } if ... else if ... else blocks need curly braces around the blocks. If ... else can also act as expression. Match let count = 5; let msg = match count { 0 => "nothing", 1 => "one item", 2 | 3 | 4 => "few items", _ => "many items" }; alert(msg); Instead of switch, there's match control structure which works by matching a value with a pattern and executing the matching arm. _ has the semantics of otherwise. Just like if, it can have an expression on the RHS or a block of code. Loop. Dgen - Team - Programming Languages Research - Wiki.mq.edu.au.

DDC. Dryad and DryadLINQ Academic Release. Dryad is a high-performance, general-purpose, distributed-computing engine that simplifies the task of implementing distributed applications on clusters of computers running a Windows® operating system. 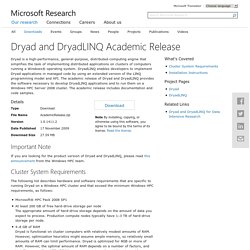 DryadLINQ enables developers to implement Dryad applications in managed code by using an extended version of the LINQ programming model and API. The academic release of Dryad and DryadLINQ provides the software necessary to develop DryadLINQ applications and to run them on a Windows HPC Server 2008 cluster. The academic release includes documentation and code samples. Important Note If you are looking for the product version of Dryad and DryadLINQ, please read this announcement from the Windows HPC team. Cluster System Requirements The following list describes hardware and software requirements that are specific to running Dryad on a Windows HPC cluster and that exceed the minimum Windows HPC requirements, as follows: Dryad Management Tools requires the following: Installation Instructions. 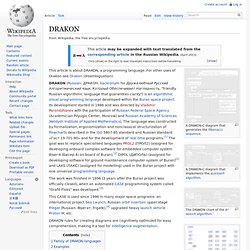 Its development started in 1986 and was directed by Vladimir Parondzhanov with the participation of Russian Federal Space Agency (Academician Pilyugin Center, Moscow) and Russian Academy of Sciences (Keldysh Institute of Applied Mathematics). The work was finished in 1996 (3 years after the Buran project was officially closed), when an automated CASE programming system called "Grafit-Floks" was developed.[3] This CASE is used since 1996 in many major space programs: an international project Sea Launch, Russian orbit insertion upper stage Fregat (Russian: Фрегат, frigate),[4] upgraded heavy launch vehicle Proton-M, etc. Family of DRAKON-languages[edit] Deluge Overview. Dodo - Home. Nidev / do language. Decac - A higher-level assembly language. Deca is a language designed to provide the advanced features of sophisticated, high-level programming languages while still programming as close as possible to the bare metal. 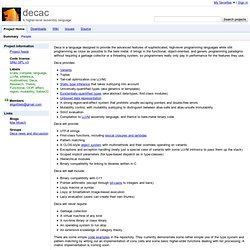 It brings in the functional, object-oriented, and generic programming paradigms without requiring a garbage collector or a threading system, so programmers really only pay in performance for the features they use. Prads Projects. Despair is a set of tools to create portable games. 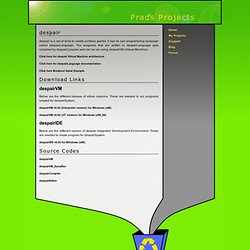 DelphiWebScript Project DWScript is an object-oriented scripting engine for Delphi based on the Delphi language, with extensions borrowed from other Pascal languages (FreePascal, Prism, etc.). 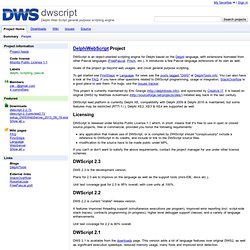 It introduces a few Pascal language extensions of its own as well. Goals of the project go beyond web usages, and cover general purpose scripting. To get started see FirstSteps or Language, for news see the posts tagged "DWS" at DelphiTools.info. You can also have a look at the FAQ. D Compiler for .NET - Home. Dylan.NET - Home. Wind River Diab Compiler. 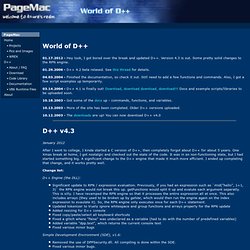 Version 4.3 is out. DMDScript. Introduction Before starting I wanted to thank Walter Bright for creating DMDScript. 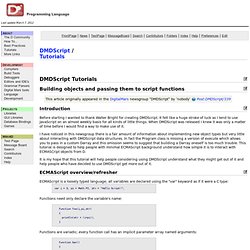 It felt like a huge stroke of luck as I tend to use JavaScript on an almost weekly basis for all kinds of little things. When DMDScript was released I knew it was only a matter of time before I would find a way to make use of it. I have noticed in this newsgroup there is a fair amount of information about implementing new object types but very little about interacting with DMDScript data structures. Welcome to dBASE. IBM. Plt-daytrader - Daytrader - A programming language for stock day trading. D Programming Language. The Duby Programming Language. Duby is a highly customizable programming language (or a structured assembly language) featuring type inference and a heavily Ruby-inspired syntax, while allowing both the inference engine and the compiler backends to be entirely customizable for any platform or type system. 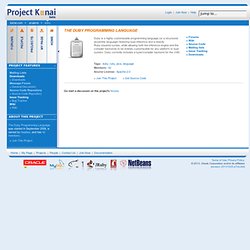 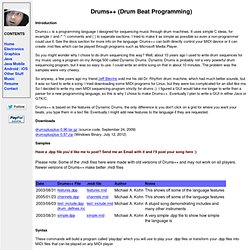 It uses simple C ideas, for example // and /* */ comments and { } to seperate sections. I tried to make it as simple as possible so even a non-programmer could use it. See the docs section for more info on the language. The deva programming language - Browse Files. DPROG Tutorial/Manual. April 3rd 2003 Thomas Mailund Bioinformatics Research Center (BiRC) University of Aarhus Email: mailund@birc.dk Abstract DPROG is a domain specific language for specifying dynamic programming algorithms; given a recursive definition of the problem, the compiler generates code for solving the problem using dynamic programming.

DataHub Scripting : CogentDataHub.com. DL/SQL - About. What is DL/SQL? DL/SQL is declarative, turing-complete programming language based on top of SQL database. The main idea is to store both program and data in one SQL table and make all the computations in it. The current version of interpreter written in PHP contains quasi-lazy evaluation and simple caching. For deeper information, please visit syntax and usage page. You can download the package here. What's the reason for such mumbo-jumbo? Maybe it sounds unbeliavable, but there was project I was leading where such language was necessary. And...? The only problem remaining was the fact the language wasn't turing-complete but the main goal was difinitely reached... ...two years and several thousand beers later I was (finally :) thinking of topic of my bachelor thesis.