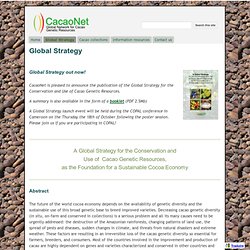 A Cookie Coffee Cup That's Easy To Recycle: Just Eat It. Drink your coffee, then eat your cup. 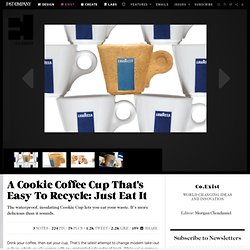 That’s the latest attempt to change modern take-out culture, which usually comes with an unintended side order of trash. While we’ve come a long way from McDonald’s Styrofoam clamshells (phased out in the 1990s), most meals or snacks to go still come with lots of disposable packaging. Not the "Cookie Cup," an edible design cooked up by Venezuelan designer Enrique Luis Sardi for the Italian coffee brand Lavazza. "The cookie cup is made of pastry that is covered with a special icing sugar that works as an insulator making the cup waterproof and sweetening at the same time," explains the website of Italian consulting firm Sardi Innovation, which managed the project. Asian economies seek food security to boost growth.

11 September 2012Last updated at 12:06 ET By Saira Syed Business reporter, BBC News, Tianjin There are concerns about food security for children in poor areas in emerging economies in the region Where the next meal will come from is not a worry for the participants in the Summer Davos in Tianjin, China, where delicious fare is on offer. 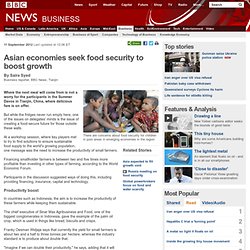 But while the fridges never run empty here, one of the issues on delegates' minds is the issue of creating a food-secure future for those outside these walls. At a workshop session, where key players met to try to find solutions to ensure sustainable food supply to the world's growing population, one message was the need to increase the productivity of small farmers. Financing smallholder farmers is between two and five times more profitable than investing in other types of farming, according to the World Economic Forum. Participants in the discussion suggested ways of doing this, including providing financing, insurance, capital and technology. BBC Food - Rise of the 'semi-vegetarians' 25 August 2012Last updated at 01:51 By Anna-Louise Taylor BBC Food Meat-free spaghetti bolognaise: Can you tell the difference? 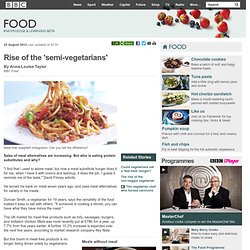 Sales of meat alternatives are increasing. But who is eating protein substitutes and why? "I find that I used to adore meat, but now a meat substitute burger does it for me, when I have it with onions and ketchup, it does the job. I guess it reminds me of the taste," David Finney admits. He turned his back on meat seven years ago, and uses meat alternatives for variety in his meals. Duncan Smith, a vegetarian for 19 years, says the versatility of the food makes it easy to eat with others. The UK market for meat-free products such as tofu, sausages, burgers, and imitation chicken fillets was most recently put at £786.5m a year, up 7.7% from five years earlier. BBC Food - Will we be buying bacon and pork sausages next year? 12 September 2012Last updated at 08:57 By Michelle Warwicker BBC Food There could soon be a global pork shortage, and a sharp rise in prices, the National Pig Association warns. 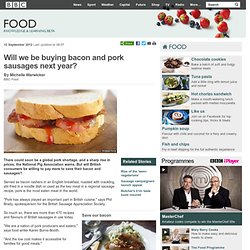 But will British consumers be willing to pay more to save their bacon and sausages? Served as bacon rashers in an English breakfast, roasted with crackling, stir-fried in a noodle dish or used as the key meat in a regional sausage recipe, pork is the most eaten meat in the world. "Pork has always played an important part in British cuisine," says Phil Brady, spokesperson for the British Sausage Appreciation Society. So much so, there are more than 470 recipes and flavours of British sausages in use today. McDonald's Fruitizz ad avoids ban. McDonald’s is free to promote soft drink Fruitizz as one of a child’s five-a-day after the advertising watchdog rejected complaints that the claim could not be proven. 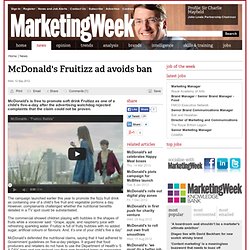 The campaign launched earlier this year to promote the fizzy fruit drink as containing one of a child’s five fruit and vegetable portions a day. However, complainants challenged whether the nutritional benefits detailed in a TV spot could be substantiated. The commercial showed children playing with bubbles in the shapes of fruits while a voiceover said: “Grape, apple, and raspberry juice with refreshing sparkling water. Fruitizz is full of fruity bubbles with no added sugar, artificial colours or flavours. Food Sleuths: Sniffing Out Where Our Meals Are Really From.

Lesley Chesson once took a road trip and collected as many "milk chugs" from McDonald’s Happy Meals as she could stuff inside a giant cooler in the back of her car. 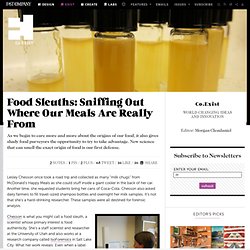 Another time, she requested students bring her cans of Coca-Cola. Chesson also asked dairy farmers to fill travel-sized shampoo bottles and overnight her milk samples. Laser 'knife' could slice food into any shape using electromagnets. Future foods: What will we be eating in 20 years' time? Volatile food prices and a growing population mean we have to rethink what we eat, say food futurologists. 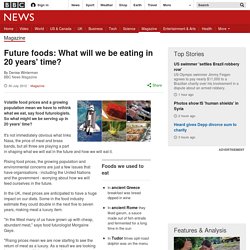 So what might we be serving up in 20 years' time? It's not immediately obvious what links Nasa, the price of meat and brass bands, but all three are playing a part in shaping what we will eat in the future and how we will eat it. Rising food prices, the growing population and environmental concerns are just a few issues that have organisations - including the United Nations and the government - worrying about how we will feed ourselves in the future.

In the UK, meat prices are anticipated to have a huge impact on our diets.