Beckett's Not I: how I became the ultimate motormouth. Every pore of my face and neck is smothered with thick black grease and cloaked in charcoal. 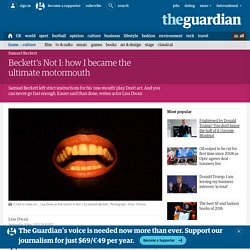 With surgical precision, I wet-wipe my lips and pull down the opaque tight shroud. Blinded now, I reach out for the hand that will guide me up the steep steps to the platform. "That's the first strap, Lisa. " Patsy Rodenburg - The Second Circle. Patsy Rodenburg: Why I do theater. Peter Brook: 'Simplicity is not a style' - video interview. Five Truths - Peter Brook. The Suit: the show that sums up Peter Brook's theatrical odyssey. Nonhlanhla Kheswa as Matilda in The Suit, directed by Peter Brook at the Young Vic. 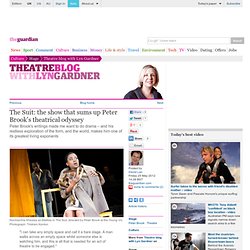 Photograph: Tristram Kenton "I can take any empty space and call it a bare stage. A man walks across an empty space whilst someone else is watching him, and this is all that is needed for an act of theatre to be engaged. " The Suit Young Vic, London Until 16 June Box office: 020-7922 2922 Venue website I started in the theatre as a stagehand, but what I longed to do was act. And so, of course, we had missed the point. What makes us individual is that we each have our own story to tell. What is? For Peter, or so it seems to me, the world has been a space at once empty and overwhelmingly crowded with life. A new style came into being: a style in which everything is empty and everything is full at the same time.

In this theatre, any actor can play any part – European, African, Indian, Japanese. Learning Zone Class Clips - Peter Brook: the theatrical innovator - Drama Video. Michael Billington's A to Z of modern drama. The British Theatre Guide: A Tribute to Joan Littlewood. A Tribute to Joan Littlewood (b. 1914, died 2002) One of Our Truly Great Theatre Visionaries and an Unsung Hero By Jackie Fletcher I was probably more worried about pimples and homework back in the early '60s when a kind and sophisticated neighbour decided to take the cultural education of a working-class teenager in hand. 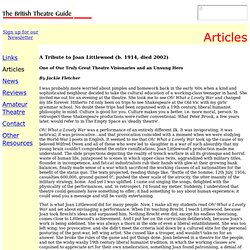 She invited me out for an evening at the theatre. She took me to see Oh! Oh! That is what Joan Littlewood did for many people. And now she is dead. In Britain, her death has spawned long tributes in all the national dailies and from a host of contemporary directors. Born in South East London in 1914, an illegitimate child, she was raised by loving grandparents. At sixteen she won a scholarship to the Royal Academy of Dramatic Art. It was at this time that she would meet Ewan MacColl (aka Jimmy Miller) who would briefly be her husband. After the war the company regrouped. But that was all to come. It was as an unsolicited script that Oh! © Jackie Fletcher. 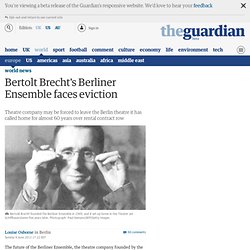 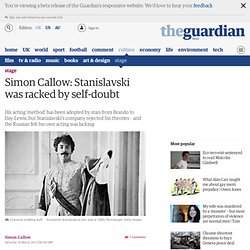 If the anniversary is remembered at all, it will be with quiet respect. There was a time – not a time out of memory, though it seems distant now – when furious battles were waged in the theatre about acting: what it was and what it should be. Katie Mitchell on directing 'Pains of Youth' Five Truths - Jerzy Grotowski. Adolphe Appia resource pack. Edward Gordon Craig Presentation. Five Truths - Antonin Artaud. Marx Brothers Mirror Scene. Understanding Balinese Dance. 13279-lot-and-his-daughters-lucas-van-leyden. Surrealism. Theatre Of Cruelty -Antonin Artaud.

Punchdrunk. Katie Mitchell: 'I'd hate to hang around making theatre when they're tired of it' - Features - Theatre & Dance. Depending on where you stand in the Mitchell debate – and she is a director who polarises audiences like no other – her relentlessly innovative approach to theatre either dusts off the classics, bringing them back to the stage with a spring in their step or it trips them up with clumsy rewrites and clashing anachronisms. 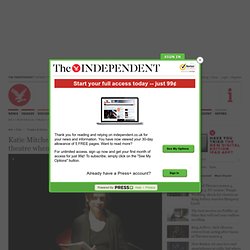 "It's very curious that people so hate one thing, so like another," she shrugs. "But you can't tell people how to receive your work, can you? That would be consummate arrogance. " Her latest project is directing Martin Crimp's new play The City at the Royal Court. Crimp and Mitchell are an established double act, having collaborated on both his plays (most recently, Attempts on Her Life) and his versions (The Seagull) over the last decade. For The City her long-time designer Vicki Mortimer is on board again as is Hattie Morahan, who played Nina in The Seagull and Iphigenia. Mitchell directed her first play, aged 16, at Oakham School.

Obituary: Jacques Lecoq - Arts & Entertainment. He was also a taskmaster who accepted nothing less than perfection from those who worked with him and the stories of his severity are legendary. 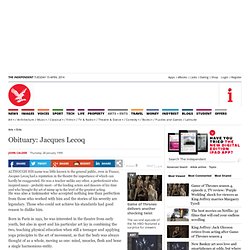 Those who could not achieve his standards had good reason to dislike him. Born in Paris in 1921, he was interested in the theatre from early youth, but also in sport and his particular art lay in combining the two, teaching physical education when still a teenager and applying yoga principles to the art of movement, so that the body was always thought of as a whole, moving as one: mind, muscles, flesh and bone a single harmonious entity. He persuaded Jacques Copeau, inheritor of the mantle of Stanislavsky, Gordon Craig and others revolting against the naturalist theatre, to allow him to introduce body movement into the training of his actors. Jean-Louis Barrault's famous mime scenes in Les Enfants du Paradis (1945) are a good example of the results he was able to achieve. John Calder. Complicite. Thrilling, Energetic and Uncompromising Physical Theatre. · Frantic Assembly.

Learning Zone Class Clips - Physical theatre - ensemble and Interaction - Drama Video. Kneehigh Theatre - local theatre company touring through the South West. Tangled feet theatre company - tangledfeet.com. Propeller. Theatre of the Oppressed. Theatre of the Oppressed was born in 1971, in Brazil, under the very young form of Newspaper Theatre , with the specific goal of dealing with local problems – soon, it was used all over the country. 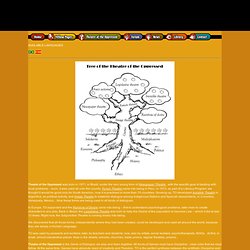 Forum Theatre came into being in Peru, in 1973, as part of a Literacy Program; we thought it would be good only for South America– now it is practiced in more than 70 countries. Growing up, TO developed Invisible Theatre in Argentina, as political activity, and Image Theatre to establish dialogue among Indigenous Nations and Spanish descendants, in Colombia, Venezuela, Mexico... Now these forms are being used in all kinds of dialogues. In Europe, TO expanded and the Rainbow of Desire came into being – first to understand psychological problems, later even to create characters in any play.