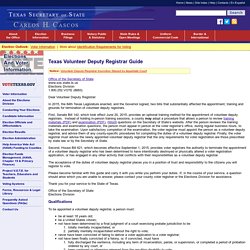 Voting in Texas: created with Zunal WebQuest Maker. Tech Companies Debate How to Handle Fake News. Facebook has been struggling to respond to charges that fake news found on the network helped Donald Trump win the election. 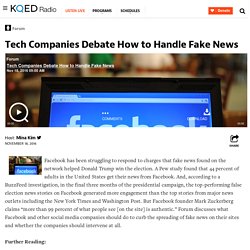 A Pew study found that 44 percent of adults in the United States get their news from Facebook. And, according to a BuzzFeed investigation, in the final three months of the presidential campaign, the top-performing false election news stories on Facebook generated more engagement than the top stories from major news outlets including the New York Times and Washington Post. Comment choisir vos informations - Damon Brown. Log In. Log In. Comment choisir vos informations - Damon Brown. Getting it Right: Fact-Checking in the Digital Age. Jane Elizabeth, a veteran journalist and adjunct professor at Old Dominion University, settled on a simple exercise to test her class on fact-checking a few semesters back. 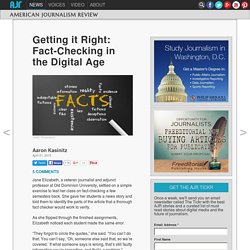 She gave her students a news story and told them to identify the parts of the article that a thorough fact checker would work to verify. As she flipped through the finished assignments, Elizabeth noticed each student made the same error. Hoax or No Hoax? Strategies for Online Comprehension and Evaluation. Home › Classroom Resources › Lesson Plans Lesson Plan Student Objectives Session 1 Session 2 Session 3 Session 4 Extensions Student Assessment/Reflections. 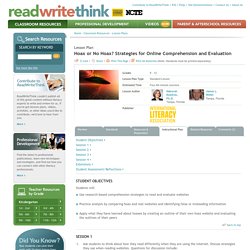 Web Literacy Education for Educators - November Learning. ALA President Julie Todaro releases statement on Libraries, the Association, Diversity and Inclusion. CHICAGO – Today American Library Association President Julie Todaro released the following statement regarding the invaluable role libraries and librarians will play within their communities as many search for common ground after the election. 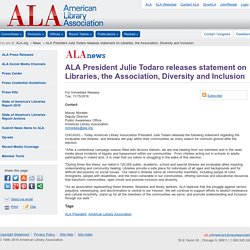 "After a contentious campaign season filled with divisive rhetoric, we are now hearing from our members and in the news media about incidents of bigotry and harassment within our communities. From children acting out in schools to adults participating in violent acts, it is clear that our nation is struggling in the wake of this election. False, Misleading, Clickbait-y, and Satirical “News” Sources.

After Election, Librarians, Book Creators Vow To Support Children. At the Ethel Walker School in Simsbury, CT, 20 minutes outside of Hartford, librarian Nishette Isaacs organized an election night watch party, preparing for the possibility of the historic event of the first woman winning the presidency. 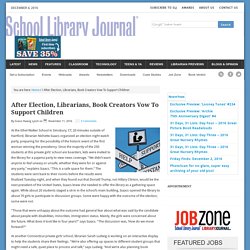 Since the majority of the 250 students at this private girls’ school are boarders, kids were invited to the library for a pajama party to view news coverage. “We didn’t want anyone to feel uneasy or unsafe, whether they were for or against any party,” explains Isaacs. “This is a safe space for them.” The students were sent back to their rooms before the results were finalized Tuesday night, and when they found out that Donald Trump, not Hillary Clinton, would be the next president of the United States, Isaacs knew she needed to offer the library as a gathering space again.

The Post-Election Library. It’s been a hard week for many Americans, as Tuesday’s election amplified divisions within communities and flamed feelings of isolation, anger and fear among much of the population. 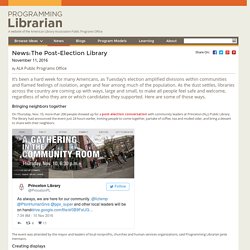 As the dust settles, libraries across the country are coming up with ways, large and small, to make all people feel safe and welcome, regardless of who they are or which candidates they supported. Here are some of those ways. Bringing neighbors together On Thursday, Nov. 10, more than 200 people showed up for a post-election conversation with community leaders at Princeton (N.J.) "We're His Problem Now" Calling Sheet. Fake news on Facebook is a real problem. These college students came up with a fix in 36 hours. 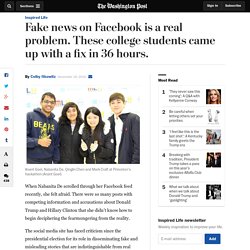 There were so many posts with competing information and accusations about Donald Trump and Hillary Clinton that she didn’t know how to begin deciphering the fearmongering from the reality. The social media site has faced criticism since the presidential election for its role in disseminating fake and misleading stories that are indistinguishable from real news. Because Facebook’s algorithm is designed to determine what its individual users want to see, people often see only that which validates their existing beliefs regardless of whether the information being shared is true. 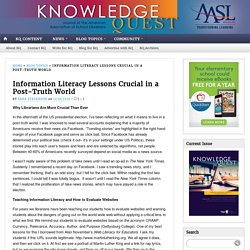 I was shocked to read several accounts explaining that a majority of Americans receive their news via Facebook. In the war on fake news, school librarians have a huge role to play - The Verge. Teaching Information Literacy Now. Last week, a new study from Stanford University revealed that many students are inept at discerning fact from opinion when reading articles online. 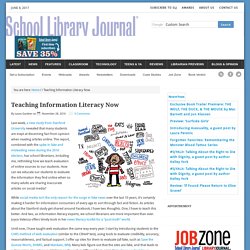