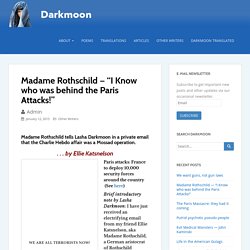 Paris attacks: France to deploy 10,000 security forces around the country (See here) Brief introductory note by Lasha Darkmoon: I have just received an electrifying email from my friend Ellie Katsnelson, aka Madame Rothschild, a German aristocrat of Rothschild parentage who has fallen out with her “family” after certain traumatic events during her adolescence, including the mysterious death of her mother in the Swiss Alps in 1989 (See her mini-biography below).

The email was sent to me on Sunday, January 11, 2015 5:56 AM, i.e., yesterday. I transcribe it exactly as written, except for one or two minor alterations in the interests of extra clarity. Reader, you must make up your own mind if there is any truth in these chilling revelations. Email from Ellie Katsnelson Dear Lasha, Muslims had nothing—I repeat, nothing—whatever to do with the carnage that took place in Paris last week. Expert Analyzes Footage of Cop Shooting During Charlie Hebdo Attack: Is It a False Flag? Source: SGTreport.com SGT Report contributor and firearms expert Mark S. 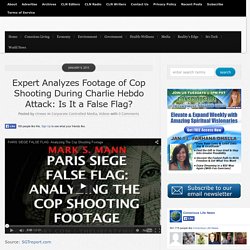 Mann analyzes the alleged shooting of a police officer in Paris. The image from the moment before the “head shot” was distributed and used by the mockingbird mainstream media worldwide the day after the massacre. And now the full video showing the shooting of the officer is being scrubbed from YouTube and edited elsewhere. France "Terrorists" Admit They Work for the Secret Service!!! Another SMOKING GUN! (Video) (Before It's News) This is another huge smoking gun, I’m surprised it was even included in MSNBC’s coverage. 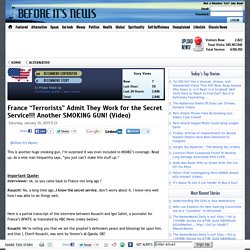 Read up. As a wise man frequently says, “you just can’t make this stuff up.” Important Quote:Interviewer: ok, so you came back to France not long ago ? Kouachi: No, a long time ago…I know the secret service, don’t worry about it. Here is a partial transcript of the interview between Kouachi and Igor Sahiri, a journalist for France’s BFMTV, as translated by NBC News (video below): Kouachi: We’re telling you that we are the prophet’s defenders peace and blessings be upon him, and that I, Cherif Kouachi, was sent by Yemen’s Al-Qaeda. Please support our vets at VeteransToday.com — Click HERE to read the exposé on the latest global false-flag. Sky News Reporter Makes Freudian Slip Covering Up False Flag In France! (VIDEOS) By: Eric Blair | Activist Post - Much has been made about the lack of blood in the video showing a French policeman allegedly shot in the head at point-blank range with an AK-47 assault rifle during the Charlie Hedbo attack. 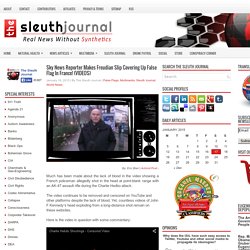 The video continues to be removed and censored on YouTube and other platforms despite the lack of blood. Yet, countless videos of John F Kennedy’s head exploding from a long-distance shot remain on these websites. Here is the video in question with some commentary: The mainstream media continues to push the story that this officer was killed by a head wound. Sky News presenter suffers Freudian Slip: “You can see the blood on the ground, which has been put there to…” He then catches himself and clarifies, “because of the blood that was shed on this spot yesterday.”

You don’t need to accept that this is some wild conspiracy to recognize when you’re being lied to. Reality is, at best, that Western governments incubated these snakes and delivered them to the desired den. FALSE FLAG 101: From Gladio To Hebdo. Source:SGTreport.com From the CIA-NATO run Operation Gladio, to 9/11 to the 7/7 bombings in London to Sandy Hook to Charlie Hebdo and most points in between, a majority of the terror events through which we suffer are planned and carried out by intelligence agencies and their minions. 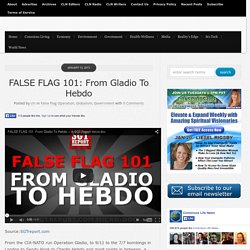 As the mainstream mockingbird media gleefully parrots the official story in every case, appealing to our emotions instead of our intellect, we ask WHY? THIS is why. Tags: 911, Charlie Hebdo, false flag, featured, Operation Gladio. French Police Commissioner Suicided After Attempting To Issue Murder Warrant Against President Obama. World's Largest English Language News Service with Over 500 Articles Updated Daily "The News You Need Today…For The World You’ll Live In Tomorrow. 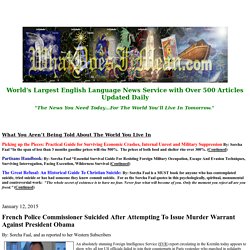 " What You Aren’t Being Told About The World You Live In Picking up the Pieces: Practical Guide for Surviving Economic Crashes, Internal Unrest and Military SuppressionBy: Sorcha Faal “In the span of less than 3 months gasoline prices will rise 500%. The prices of both food and shelter rise over 300%. (Continued) Partisans Handbook: By: Sorcha Faal “Essential Survival Guide For Resisting Foreign Military Occupation, Escape And Evasion Techniques, Surviving Interrogation, Facing Execution, Wilderness Survival (Continued) The Great Refusal: An Historical Guide To Christian Suicide: By: Sorcha Faal is a MUST book for anyone who has contemplated suicide, tried suicide or has had someone they know commit suicide. January 12, 2015 French Police Commissioner Suicided After Attempting To Issue Murder Warrant Against President Obama [Ed.

Return To Main Page. Police Chief Investigating Paris HEBDO Attack Kills Himself (Video) (Before It's News) via Uprootedpalestinians.wordpress.com We learned this morning, a Commissioner SRPJ Limoges has committed suicide last night in his office with his service weapon . 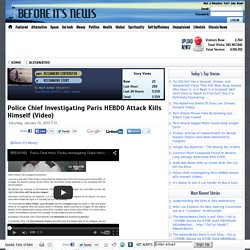 Information confirmed by his superiors. It is unknown at this time the reasons for his actions. He would have killed himself that night to 1 hour. Proof/Paris False Flag/Brothers Framed and Murdered.