Turkey's response to the coup could herald a permanent break with the West. Turkish Clerics Weigh in on Father-Daughter Lust. Originally published under the title "Turkey: Is It Religiously All Right to Lust for My Daughter? 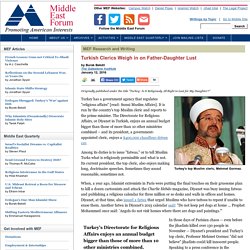 " Turkey has a government agency that regulates "religious affairs" [read: Sunni Muslim Affairs]. It is run by the country's top Muslim cleric and reports to the prime minister. The Directorate for Religious Affairs, or Diyanet in Turkish, enjoys an annual budget bigger than those of more than 10 other ministries combined – and its president, a government-appointed cleric, enjoys a $400,000 chauffeur-driven car. Among its duties is to issue "fatwas," or to tell Muslim Turks what is religiously permissible and what is not.

Its current president, the top cleric, also enjoys making long, doctrinaire speeches. In those days of Parisian chaos -- even before the jihadists killed over 130 people in November -- Diyanet's president and Turkey's top cleric, Professor Mehmet Gormez "did not believe" jihadists could kill innocent people. Now think about that. Erdoğan's One-Man Islamist Show: Dateline. Secular and liberal Turks sighed with premature relief when on June 7, 2015, President Recep Tayyip Erdoğan's Justice and Development Party (Adalet ve Kalkınma Partisi, AKP) lost its parliamentary majority in general elections for the first time since it came to power in November 2002. 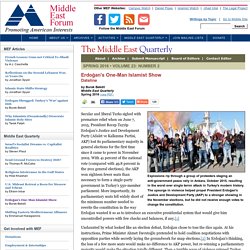 With 41 percent of the national vote (compared with 49.8 percent in the 2011 general elections), the AKP won eighteen fewer seats than necessary to form a single-party government in Turkey's 550-member parliament. More importantly, its parliamentary seats fell widely short of the minimum number needed to rewrite the constitution in the way Erdoğan wanted it so as to introduce an executive presidential system that would give him uncontrolled powers with few checks and balances, if any.[1] Undaunted by what looked like an election defeat, Erdoğan chose to toss the dice again.

Then in October, ISIS attacked in the Turkish capital. Recep Tayyip Erdogan is sabotaging the West's battle to crush ISIS. By Michael Burleigh for the Daily Mail Published: 01:35 GMT, 27 November 2015 | Updated: 07:55 GMT, 27 November 2015 Erdogan's planes have aimed their missiles almost exclusively at the one army which poses a real threat to ISIS - the Kurdish PKK forces inside Syria Despotic presidents tend to have many admirers who will hail them as saviours of their nations. 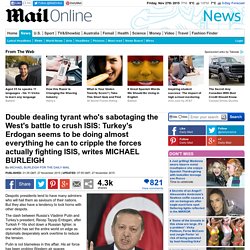 But they also have a tendency to lock horns with other despots. The clash between Russia’s Vladimir Putin and Turkey’s president, Recep Tayyip Erdogan, after Turkish F-16s shot down a Russian fighter, is one which has set the entire world on edge as diplomats desperately work overtime to reduce the tension. Putin is not blameless in this affair. And was there any truth in Putin’s accusation yesterday — made just as Moscow was expelling 39 Turkish businessmen attending a conference in Russia — that Turkey is propping up ISIS by buying oil from them? Until this happened, the presidency had been a largely ceremonial role. Loaded: 0% The One Picture That Sums Up the Situation in Turkey Right Now. This is the picture that has rocked Turkey. 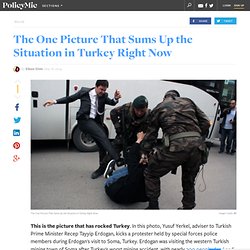 In this photo, Yusuf Yerkel, adviser to Turkish Prime Minister Recep Tayyip Erdogan, kicks a protester held by special forces police members during Erdogan's visit to Soma, Turkey. Erdogan was visiting the western Turkish mining town of Soma after Turkey's worst mining accident, with nearly 300 people dead and another 100 people estimated to be trapped inside the mine. Protests started when the prime minister made some bizarre comments. The only thing that could make this already fraught situation worse is callousness on the part of the government — and Erdogan fully delivered on that front. "Explosions like this in these mines happen all the time. Erdogan then proceeded to list century-old mining disasters to prove his point that accidents like this cannot be avoided. Image Credit: AP Protests erupted all around the town of Soma, where the mine is located. And they have a point. Q&A: Turkish PM Recep Tayyip Erdogan's troubles. 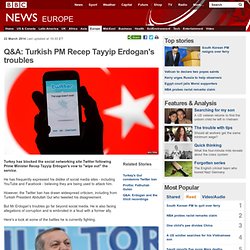 He has frequently expressed his dislike of social media sites - including YouTube and Facebook - believing they are being used to attack him. However, the Twitter ban has drawn widespread criticism, including from Turkish President Abdullah Gul who tweeted his disagreement. But Mr Erdogan's troubles go far beyond social media.

He is also facing allegations of corruption and is embroiled in a feud with a former ally. Here's a look at some of the battles he is currently fighting. Last month, an audio recording posted on an anonymous Twitter account appeared to show Mr Erdogan talking to his son about hiding large sums of money. Mr Erdogan denounced it as a fake. "I don't care what the international community says at all. DNS details that could be used to bypass the ban were spray-painted on to a wall in Istanbul.