To Vladimir Putin, we in the West are stinking hypocrites who disrespect Russia. War is brewing in the Balkans again –the West can't afford to turn a blind eye any longer. If we don't stand up to Putin, there really could be war: MAX HASTINGS tells of his fears after the Kremlin and Nato's sabre rattling  When the Soviet Union collapsed a quarter of a century ago, the United States indulged in a rash surge of triumphalism. 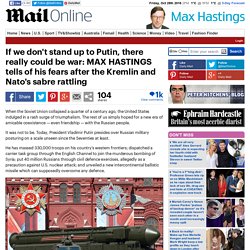 The rest of us simply hoped for a new era of amicable coexistence — even friendship — with the Russian people. It was not to be. Today, President Vladimir Putin presides over Russian military posturing on a scale unseen since the Seventies at least. He has massed 330,000 troops on his country’s western frontiers; dispatched a carrier task group through the English Channel to join the murderous bombing of Syria; put 40 million Russians through civil defence exercises, allegedly as a precaution against U.S. nuclear attack; and unveiled a new intercontinental ballistic missile which can supposedly overcome any defence. A Yars RS-24 intercontental ballistic missile trundles through the Red Square in Moscow earlier this year during the parade to mark the 71st anniversary of victory over Nazi Germany. Russia deploys nuclear-capable missiles in Kaliningrad as tensions between US and Russia become 'more dangerous than Cold War' Four Nato airforces scramble jets as Russian bombers scout Atlantic coast.

The West caving in to Vladimir Putin could be biggest shift in power since Suez Crisis. The White House was caught off-guard by Russia’s shock announcement that it was declaring victory on its own terms in Syria. 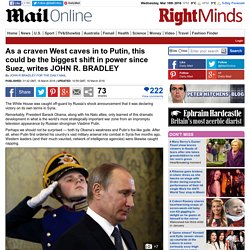 Remarkably, President Barack Obama, along with his Nato allies, only learned of this dramatic development in what is the world’s most strategically important war zone from an impromptu television appearance by Russian strongman Vladimir Putin. Perhaps we should not be surprised — both by Obama’s weakness and Putin’s fox-like guile. After all, when Putin first ordered his country’s vast military arsenal into combat in Syria five months ago, Western leaders (and their much-vaunted, network of intelligence agencies) were likewise caught napping.

When Vladimir Putin declared he was sending his military to Syria, the West were caught unaware. Russia's Social Media vs. the Kremlin's Domestic Information War. The West has only recently started to understand how deeply public opinion in the Russian Federation has become infected with rabidly anti-Western conspiratorial and Manichean worldviews. 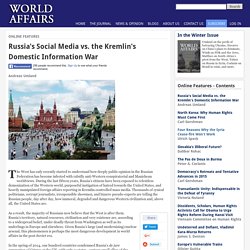 During the last fifteen years, Russia’s citizens have been exposed to relentless demonization of the Western world, purposeful instigation of hatred towards the United States, and heavily manipulated foreign affairs reporting in Kremlin-controlled mass media. Thousands of cynical politicians, corrupt journalists, irresponsible showmen, and bizarre pseudo-experts are telling the Russian people, day after day, how immoral, degraded and dangerous Western civilization and, above all, the United States are.

Vladimir Putin brings in law which makes it treason to talk to a foreigner. Critics say President will use it to silence critics and reduce foreign influenceLaw backed by the Federal Security Service, the main successor of the KGB By Daily Mail Reporter Published: 17:08 GMT, 14 November 2012 | Updated: 12:02 GMT, 15 November 2012 Russia has brought in a new treason law which opponents say Vladimir Putin (pictured) will use it to silence his critics Russian President Vladimir Putin has signed a new treason law which opponents say could be used to smother dissent and put anyone who has contact with foreigners at risk. 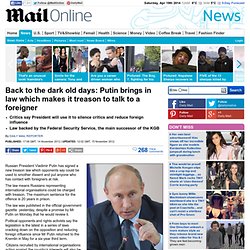 The law means Russians representing international organisations could be charged with treason. The law was published in the official government gazette yesterday, despite a promise by Mr Putin on Monday that he would review it. Political opponents and rights activists say the legislation is the latest in a series of laws cracking down on the opposition and reducing foreign influence since Mr Putin returned to the Kremlin in May for a six-year third term.

Russian judge says three women from punk band Pussy Riot guilty of hooliganism motivated by religious hatred. Judge Marina Syrova said the three band members had 'carefully planned' their February 21 action inside the Christ the Saviour CathedralNadezhda Tolokonnikova, 22, Maria Alyokhina, 24, and Yekaterina Samutsevich, 30, smiled as the verdict was read outAbout 20 people have been arrested outside the court including former world chess champion Garry Kasparov, now an opposition political figureProtests in support of the group took place today in cities around the worldA long list of international celebrities have backed their cause By Will Stewart Published: 11:47 GMT, 17 August 2012 | Updated: 14:07 GMT, 18 August 2012 As the outcry continues after the anti-Putin Pussy Riot singers were jailed for two years over a 50-second cathedral protest, former world chess champion Garry Kasparov was arrested for his protestations outside the court. 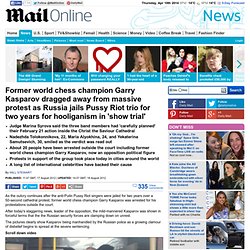 The pictures clearly show Kasparov being manhandled by the Russian police as a growing clamour of disbelief begins to spread at the severe sentencing. As the dust settles from Russia's election protests, Putin quietly begins his crackdown on opposition. By David Harding PUBLISHED: 14:27 GMT, 10 July 2012 | UPDATED: 16:20 GMT, 10 July 2012 Keeping a warm hand around the throat of opponents has long been a preoccupation of Russian leaders. 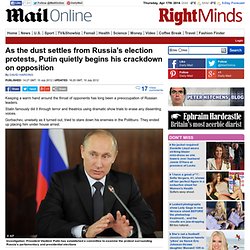 Stalin famously did it through terror and theatrics using dramatic show trials to erase any dissenting voices. Vladimir Putin inaugurated as Russian president for THIRD 6-year term. Russian leader calls for 'unity' during ceremonial speech - the night after huge protests in Moscow20,000 demonstrators had protested against Putin, with police detaining 400 during violent clashesPutin, 59, sworn in for third presidential term after first being elected in 2000 By Will Stewart and David Harding. 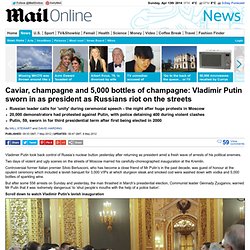 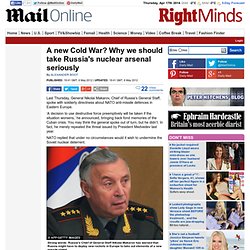 ‘A decision to use destructive force preemptively will be taken if the situation worsens,’ he announced, bringing back fond memories of the Cuban crisis. Crumbling Soviet Military Bases: A 20th Century Empire in Decay. Mig-21, 126th Fighter Aviation Regiment, Mongolia: During the 1970s, this base was seen as the front line for potential conflict with China and was therefore kept on high alert, ready to attack at a moment’s notice. 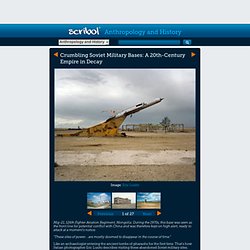 “These sites of power… are mostly doomed to disappear in the course of time.” Like an archaeologist entering the ancient tombs of pharaohs for the first time. That’s how Italian photographer Eric Lusito describes visiting these abandoned Soviet military sites; places that have been brought to ruin, but which remain – and contain – fascinating relics of their now-collapsed empire. “I had the feeling of discovering a new world,” Lusito tells us. “But one that was already starting to disappear.”