Lost childhoods, barmy Brexits, and tidal power fantasies. Lights out: The dark future of electric power - opinion - 12 May 2014. Electrical blackouts that cause disruption to millions are a looming threat to society ON 14 August 2003, the north-eastern US and Ontario, Canada, were crippled by an enormous electrical blackout that affected 50 million people. 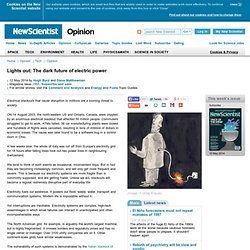 Commuters struggled to get to work, ATMs failed, 36 car manufacturing plants were closed and hundreds of flights were cancelled, resulting in tens of millions of dollars in economic losses. The cause was later found to be a software bug in a control room in Ohio. A few weeks later, the whole of Italy was cut off from Europe's electricity grid for 18 hours after falling trees took out two power lines in neighbouring Switzerland. 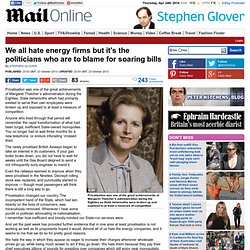 State behemoths which had primarily existed to serve their own employees were broken up and exposed to at least a measure of competition. Anyone who lived through that period will remember the rapid transformation of what had been turgid, inefficient State-owned monopolies. The newly privatised British Airways began to take an interest in its customers. 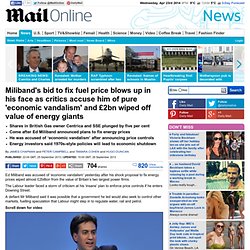 The Labour leader faced a storm of criticism at his ‘insane’ plan to enforce price controls if he enters Downing Street. A defiant Mr Miliband said it was possible that a government he led would also seek to control other markets, fuelling speculation that Labour might step in to regulate water, rail and petrol. Scroll down for video It is insane. 'This is sheer, unbridled socialism. Britain can’t afford to surrender to the greens on shale gas. The scandal of official reluctance to develop Britain’s shale gas potential is at last beginning to surface. 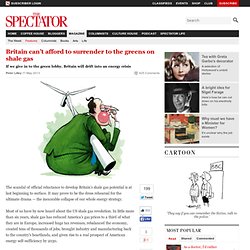 It may prove to be the dress rehearsal for the ultimate drama — the inexorable collapse of our whole energy strategy. Most of us have by now heard about the US shale gas revolution. In little more than six years, shale gas has reduced America’s gas prices to a third of what they are in Europe, increased huge tax revenues, rebalanced the economy, created tens of thousands of jobs, brought industry and manufacturing back to the country’s heartlands, and given rise to a real prospect of American energy self-sufficiency by 2030. The great green con no. 1: The hard proof that finally shows global warming forecasts that are costing you billions were WRONG all along. By David Rose Published: 23:37 GMT, 16 March 2013 | Updated: 10:40 GMT, 1 May 2013 No, the world ISN'T getting warmer (as you may have noticed). 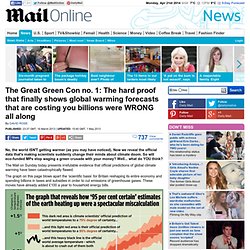 Now we reveal the official data that's making scientists suddenly change their minds about climate doom. So will eco-funded MPs stop waging a green crusade with your money? Well... what do YOU think? The Mail on Sunday today presents irrefutable evidence that official predictions of global climate warming have been catastrophically flawed. The graph on this page blows apart the ‘scientific basis’ for Britain reshaping its entire economy and spending billions in taxes and subsidies in order to cut emissions of greenhouse gases. Global warming graph Steadily climbing orange and red bands on the graph show the computer predictions of world temperatures used by the official United Nations’ Intergovernmental Panel on Climate Change (IPCC).

The graph shows in incontrovertible detail how the speed of global warming has been massively overestimated. Experts. The Great Green Con no.2: How councils duped by bad science hire 'eco' snoopers - but slash OAPs' benefits. Councils spend on a huge range of green jobs from Carbon Officers to Climate Change Managers while their grants are being cutGreen staff spending has increased at three times rate of inflation By David Rose Published: 01:21 GMT, 17 March 2013 | Updated: 01:23 GMT, 17 March 2013 Councils across the UK are spending millions and employing hundreds of ‘low carbon’ officers to fight global warming – which now appears not to pose an imminent threat – at the same time as making sweeping cuts to children’s services, the arts and the elderly. 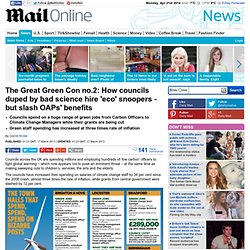 The councils have increased their spending on salaries of climate change staff by 34 per cent since the 2008 crash, almost three times the rate of inflation, while grants from central government were slashed by 12 per cent. EU's 'green' petrol will drive up prices by the end of the year and could damage your car. E10 means a typical family will pay around £80 a year extra for petrolThe fuel is due to be launched in the UK later this yearDavid Cameron has hinted there may be a freeze in fuel duty in the Budget By Sean Poulter Published: 00:49 GMT, 12 March 2013 | Updated: 01:25 GMT, 12 March 2013 Millions of drivers have been warned about higher fuel costs and even engine damage if they use a new ‘green’ petrol. 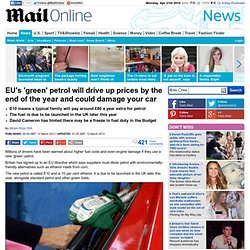 Britain has signed up to an EU directive which says suppliers must dilute petrol with environmentally-friendly alternatives such as ethanol made from corn. The new petrol is called E10 and is 10 per cent ethanol. Paying extra at the pump: The new biofuel gives fewer miles to the gallon However, a study today warns E10 gives fewer miles to the gallon, so a typical family will pay around £80 a year extra to travel the same distance. There are also fears that the high ethanol content can effectively melt components of some engines in older cars and motorbikes.

Madness! How we'll pay billions on our electricity bills so Britain's biggest power station can switch from coal to wood chips - and it won't help the planet one jot. By Christopher Booker Published: 22:44 GMT, 8 March 2013 | Updated: 01:05 GMT, 9 March 2013 There could be no better symbol of the madness of Britain’s energy policy than what is happening at the giant Drax power station in Yorkshire, easily the largest in Britain. 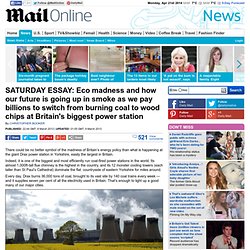 Indeed, it is one of the biggest and most efficiently run coal-fired power stations in the world. Its almost 1,000ft-tall flue chimney is the highest in the country, and its 12 monster cooling towers (each taller than St Paul’s Cathedral) dominate the flat countryside of eastern Yorkshire for miles around. How MPs in the pay of subsidised eco-firms set insane new carbon targets that send your heating bills sky-rocketing. MP Tim Yeo was paid £135,970 last year by three 'green' companiesHe has moved an amendment to the Energy Bill that would set a crippling target for the amount of carbon dioxide by generating power in 2030 By David Rose Published: 00:16 GMT, 24 February 2013 | Updated: 16:34 GMT, 24 February 2013 Pay packet: Like all MPs Tim Yeo is paid £65,000 but three 'green' companies also paid the Conservative MP for South Suffolk £135,970 in last year alone Like all MPs, Tim Yeo is paid £65,000 a year. 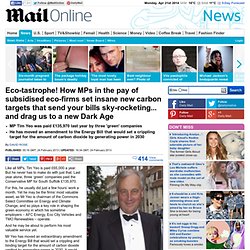 But he never has to make do with just that. For this, he usually did just a few hours’ work a month. And he may be about to perform his most valuable service yet. Mr Yeo has moved an extraordinary amendment to the Energy Bill that would set a crippling and binding target for the amount of carbon dioxide emitted by generating power in 2030. For the rest of us, however, the effects will be very different. Yet despite the considerable drawbacks, the amendment is likely to be passed into law. Families face £17billion bill after Miliband's offshore wind farm blunders. Botched scheme will cost UK taxpayers billions says Commons committeeGenerous deals for firms are 'shocking' says Labour MPSix licences awarded to just two firms By Jason Groves Published: 00:44 GMT, 14 January 2013 | Updated: 00:44 GMT, 14 January 2013 Mistake: A blundered scheme for offshore wind farms will cost householders billions Basic mistakes in the design of Ed Miliband’s original scheme to encourage a new generation of offshore wind farms will cost households £17billion, MPs warn today. 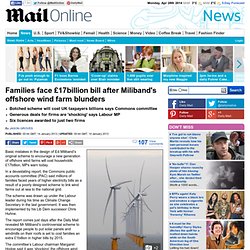 In a devastating report, the Commons public accounts committee (PAC) said millions of families faced years of higher electricity bills as a result of a poorly designed scheme to link wind farms out at sea to the national grid. The scheme was drawn up under the Labour leader during his time as Climate Change Secretary in the last government. The committee’s Labour chairman Margaret Hodge said it was ‘shocking’ the offshore wind deals went ahead, given the billions wasted on PFI in the past. £12m wind farm will blight Bronte country despite pleas not to ruin landscape. By Chris Brooke Published: 00:22 GMT, 14 November 2012 | Updated: 07:51 GMT, 14 November 2012 A wind farm of nine giant turbines will be built on the bleak moors which inspired Emily Bronte's classic novel Wuthering Heights.

The £12million scheme was approved yesterday despite impassioned pleas not to ruin the character of the iconic landscape. At 377ft (115 metres) high, the turbines will be more than twice the 169ft height of Nelson's Column. Each giant blade will measure 131ft (40 metres). A £12million scheme was approved to build nine turbines, on Ovenden Moor, similar to these at Cefn Croes windfarm near Aberystwyth, left - the bleak moors inspired Emily Bronte's classic novel Wuthering Heights The local planning committee's unanimous decision will allow energy giant E.ON to build the controversial wind farm at Ovendon Moor, West Yorkshire. Campaigners are also furious that building the foundations involves injecting 35,000 tonnes of concrete into the moorland.

Onshore wind farms give other renewable energy sources a bad name, Energy Minister John Hayes tells the Daily MailExisting and planned sites are enough to meet environmental goalsResearch into effects on house prices, noise levels and military radars has been commissioned, said Mr Hayes Comments spark a furious coalition row, with Lib Dem Energy Secretary Ed Davey insisting 'I'm in charge' By Matt Chorley and James Chapman. Good riddance to wind farms - one of the most dangerous delusions of our age. By Christopher Booker PUBLISHED: 00:31 GMT, 31 October 2012 | UPDATED: 01:16 GMT, 1 November 2012 Energy Minister John Hayes has announced no more wind farms are allowed to be built in the UK The significance of yesterday’s shock announce-ment by our Energy Minister John Hayes that the Government plans to put a firm limit on the building of any more onshore windfarms is hard to exaggerate.

Coalition at war over wind farms: Cameron backs minister who heralded their demise - to fury of the Lib Dems. Wind farms given £34m to switch off in bad weather: Households stung by secretive payments.