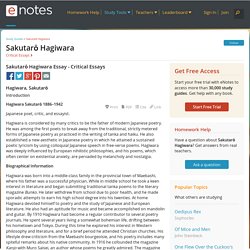 Hagiwara is considered by many critics to be the father of modern Japanese poetry. He was among the first poets to break away from the traditional, strictly metered forms of Japanese poetry as practiced in the writing of tanka and haiku. He also established a new aesthetic in Japanese poetry in which he attained a sustained poetic lyricism by using colloquial Japanese speech in free-verse poems. Hagiwara was deeply influenced by European nihilistic philosophies, and his poems, which often center on existential anxiety, are pervaded by melancholy and nostalgia. Biographical Information Hagiwara was born into a middle-class family in the provincial town of Maebashi, where his father was a successful physician. Major Works Hagiwara's first poetry collection, Howling at the Moon, had a wide and immediate impact on the Japanese literary community. Critical Reception. Sakutarō Hagiwara’s “Cat Town” - Words Without Borders. 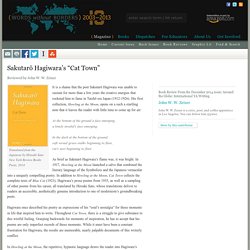 W. Zeiser Translated from the Japanese by Hiroaki SatoNew York Review Books Poets, 2014 It is a shame that the poet Sakutarō Hagiwara was unable to sustain for more than a few years the creative energies that rocketed him to fame in Taishō era Japan (1912-1926). His first collection, Howling at the Moon, opens on a such a startling note that it leaves the reader with little time to come up for air: At the bottom of the ground a face emerging,a lonely invalid’s face emerging.In the dark at the bottom of the ground,soft vernal grass-stalks beginning to flare,rat’s nest beginning to flare As brief as Sakutarō Hagiwara’s flame was, it was bright.

Hagiwara once described his poetry as expressions of his “soul’s nostalgia” for those moments in life that inspired him to write. Sims Reed - Artists Illustrated Books. ONCHI Koshiro, HAGIWARA Sakutaro & TANAKA Kyokichi. 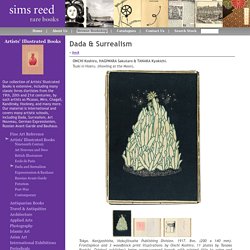 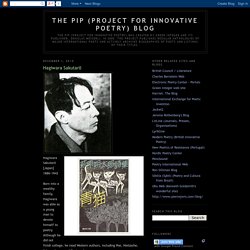 Although he did not finish college, he read Western authors, including Poe, Nietzsche, Schopenhauer, and Dostoevsky. He began by writing poems in the tanka form, drawn to it in 1901 when he read the collection Midare-gami (Hair in Disorder) by Yosano Akiko. Writing poems in this form for about ten years, he stopped in 1910. During this same period Sakutarō moved from his native Maebashi to Kumamoto, then to Okayama and, ultimately, to Tokyo, failing his classes in Japanese and unable to complete his schooling. His father's wealth allowed him to remain in Tokyo without any definite goals for three years. In early 1913 he began corresponding with the poet Muro'o Saisei, whose poems he had read in the journal Zumuboa. Suddenly in 1915, he stopped writing poetry, attempting suicide because of his continued ill-health and drunkenness. [Based on material by Hiroaki Sato] Bamboo Death Frog's Death Chair. The Weird – Town of Cats – Hagiwara Sakutarō. ‘The Town of Cats’ (1935) is Hagiwara Sakutarō’s only short story. 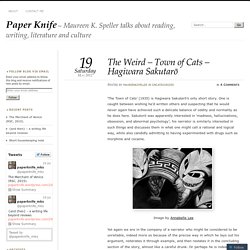 One is caught between wishing he’d written others and suspecting that he would never again have achieved such a delicate balance of oddity and normality as he does here. Sakutorō was apparently interested in ‘madness, hallucinations, obsession, and abnormal psychology’; his narrator is similarly interested in such things and discusses them in what one might call a rational and logical way, while also candidly admitting to having experimented with drugs such as morphine and cocaine. Image by Annabelle Lee Yet again we are in the company of a narrator who might be considered to be unreliable, indeed more so because of the precise way in which he lays out his argument, reiterates it through example, and then restates it in the concluding section of the story, almost like a careful drunk. Or perhaps he is indeed correct. Then again, maybe not, for whatever else is going on, this tale is carefully structured. 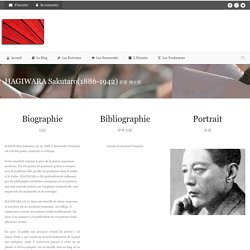