What happened to Amelia Earheart?

9 Mysterious Plane Crashes. Mysteries Man has long been fascinated with flying, and thanks to modern technology, that dream has become a reality. 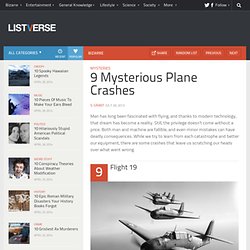 Still, the privilege doesn’t come without a price. Both man and machine are fallible, and even minor mistakes can have deadly consequences. While we try to learn from each catastrophe and better our equipment, there are some crashes that leave us scratching our heads over what went wrong. 9 Flight 19 While Flight 19 began as a routine training mission for the US Navy, it ended in six planes vanishing into thin air and sparked the legend of the Bermuda Triangle. The five Navy Avenger planes that made up Flight 19 (led by Charles Taylor) took off from Fort Lauderdale, Florida on December 5, 1945. 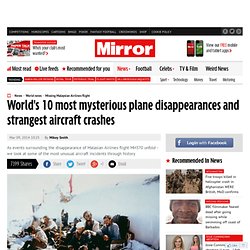 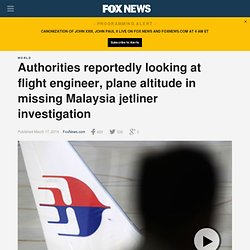 A senior police official told Reuters Monday that authorities are investigating Mohd Khairul Amri Selamat, a 29-year-old Malaysian flight engineer. Selamat reportedly said on social media that he had worked for a private jet charter company. "Yes, we are looking into Mohd Khairul, as well as the other passengers and crew,” said the police official, who has knowledge of ongoing investigations. Malaysia Airlines Jet Made 'Tactical Aviation Maneuvers': Law Enforcement Officials. <br/><a href=" US News</a> | <a href=" Business News</a> Copy U.S. law enforcement and intelligence officials are focusing on the possibility that at least one of the Malaysia Airlines pilots is responsible for the disappearance of flight MH 370 after new information revealed the plane performed "tactical evasion maneuvers" after it disappeared from radar, two senior law enforcement officials told ABC News today. 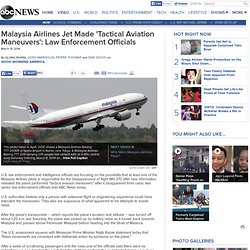 U.S. authorities believe only a person with extensive flight or engineering experience could have executed the maneuvers. They also are suspicious of what appeared to be attempts to evade radar. Malaysia Airlines Flight 370 search grows, pilots face scrutiny. Your video will begin momentarily. 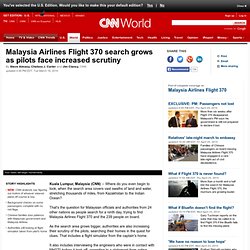 NEW: CNN analysts say figuring out motive of whoever steered plane off course is keyBackground checks on some passengers complete with no red flagsChinese families lose patience with Malaysian government and Malaysia Airlines Authorities still looking at flight simulator taken from pilot's home Kuala Lumpur, Malaysia (CNN) -- Where do you even begin to look, when the search area covers vast swaths of land and water, stretching thousands of miles, from Kazakhstan to the Indian Ocean? That's the question for Malaysian officials and authorities from 24 other nations as people search for a ninth day, trying to find Malaysia Airlines Flight 370 and the 239 people on board. 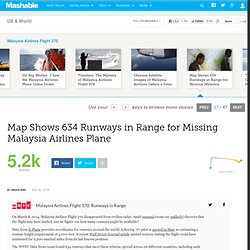 They are basing that theory on a series of satellite “pings” the plane sent as it soared off toward India and the Middle East — or maybe out into the expanse of the Indian Ocean. Flying on a full tank of fuel, data show the jetliner could have traveled at least 2,200 nautical miles after it vanished from its last confirmed location over the Gulf of Thailand. If piracy was the culprit behind the plane's disappearance, then the hijackers were likely looking for a place to land. A Boeing 777-200 like Malaysia Airlines Flight 370 would need at least 5,000 feet of runway, according to an American Airlines pilot who spoke to Slate. There are 634 possible runways spread across 26 different countries stretching from the northern tip of India to the western coast of Australia.

Image: Google Maps Image: Google maps. India puts search on hold for missing Malaysia Airlines Flight MH370 - World. India on Sunday put on hold its search for missing Malaysia Airlines flight MH370, at the request of the government in Kuala Lumpur, which wants to reassess the week-old hunt for the Boeing 777 that is now suspected of being hijacked. 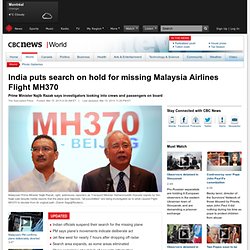 India had been searching in two areas, one around the Andaman and Nicobar Islands and a second further west in the Bay of Bengal. Both searches have been suspended, but may resume, defence officials said. Top Ten Most Famous Plane Crashes. Famous people who died in aviation accidents. Amelia Earhart Biography - 115th Birthday, Facts, Disappearance, Video, Photos, Life Story. What Happened to Amelia Earhart? - Facts & Summary. Amelia Earhart’s daring round-the-world-flight was cut short when her Lockheed Electra disappeared over the Pacific Ocean on June 2, 1937. 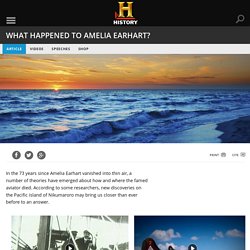 Within hours, rescue workers began scouring the area for signs of the famed aviator and her navigator, Fred Noonan. The U.S. Navy and Coast Guard launched the largest and most expensive air and sea search in American history. When their efforts failed, Earhart’s husband of six years, George Putnam, financed his own search but came up equally empty-handed.

A living legend had vanished into thin air. In an official report, the U.S. government concluded that the two seasoned flyers, unable to locate their destination of Howland Island, ran out of fuel, crashed into the water and sank. Amelia Earhart. During an attempt to make a circumnavigational flight of the globe in 1937 in a Purdue-funded Lockheed Model 10 Electra, Earhart disappeared over the central Pacific Ocean near Howland Island. 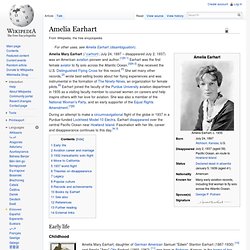 Fascination with her life, career and disappearance continues to this day. [N 3] Early life Childhood. 6 other planes that have disappeared mysteriously. Malaysia Airlines Flight 370 is the latest example of a very rare event in aviation: a plane that vanishes. 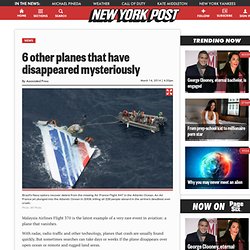 With radar, radio traffic and other technology, planes that crash are usually found quickly. But sometimes searches can take days or weeks if the plane disappears over open ocean or remote and rugged land areas. Since the dawn of the jet age in 1958, here are some other notable disappearances (not all were jets): Air France Flight 447 Modal Trigger Crew members of the Brazilian Frigate “Constituicao” on June 7, 2009 recovering debris from Air France flight 447.Photo: AFP/Getty. 1955. 5 Most Mysterious Plane Crashes. Top 10 Deadliest Airline Disasters.

Technology Airplane accidents somehow attract the public’s attention with their drama and destruction. No car crash could ever seem so fascinating, terrifying or deadly, as many of them as happens every day. This is a list of the ten deadliest airplane accidents, or at least disasters most likely caused by accident. Excluded are Pan Am Flight 103 (270 fatalities, 0 survivors) and Air India Flight 182 (329 fatalities, 0 survivors), both caused by bombs, and the World Trade Center disaster (2753 fatalities shared between two planes), due to hijacking. The 10 Deadliest Airplane Crashes in History. Naturally, a list of the deadliest airplane crashes in history should serve as a reminder that life is fragile. What Caused the Deadly 747 Crash in Afghanistan? The video showing a U.S. civilian cargo jet slamming into the ground in Afghanistan and exploding into a fireball is chilling and perhaps telling, but it's only one piece of evidence the Afghan government will use to investigate what caused National Airlines NCR 102 to crash and kill all seven crew members this week.

The Afghanistan Ministry of Transportation and Commercial Aviation will lead the investigation as part of the U.S. -led coalition's policy of making Afghanistan govern itself. But it won't be working alone. Four investigators from the National Transportation Safety Board arrived in Afghanistan on May 2 with representatives of the Federal Aviation Administration and Boeing, which made the 747-400 cargo plane that went down. The doomed flight was scheduled to carry military vehicles and other cargo from Bagram Airbase to Dubai, a frequent stop for troops and equipment coming from and going to Afghanistan. The U.S.