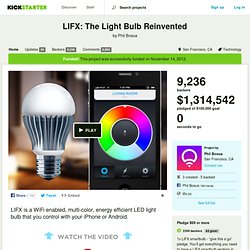 It's a wifi-enabled, energy efficient, multi-colored bulb that you control with your iPhone or Android. LIFX gives you unprecedented control of your lights, reduces your energy costs, lasts up to 25 years and delivers an amazing range of experiences we think you’ll love. LIFX is incredibly easy to set-up. Simply replace your existing bulbs with LIFX smartbulbs, download and install our free app from the App Store or Google Play and you're good to go.

We [Phil Bosua, Andrew Birt, Andy Gelme, John Bosua, Ben Hamey, Dave Evans and Guy King] have designed, redesigned and reimagined LIFX many times during the past six months, pouring countless hours into thinking about the user experience, the technical aspects of the project and how to deliver the world's smartest lightbulb to you at an affordable price point. LED lighting is the future of home and commercial lighting around the world. In addition they're unbelievably long-lasting. Circle Hook Light Design  Hook the bulb onto the fixture to turn on, unhook and rotate to turn off. This fixture is made for a standard FC16T9 circle shaped fluorescent light. This piece reengages our relationship to the ubiquitous circle shaped fluorescent. Usually these bulbs are found inside ceiling fixtures in kitchens and bathrooms.

(You know the ones that look like boobs.) They are hard to reach, annoying to maintain and often conceal the bulb itself. With Circle Hook Light the light bulb is in plain view. Circle Hook Light is both functional design and sculpture. Futuristic design Technology innovation Phones of the future Phones of the future Technology devices Future camera. Minali singh: 'lotus' lamps and 'rocket' planter. Jan 13, 2010 minali singh: 'lotus' lamps and 'rocket' planter ‘lotus’ and ‘rocket’ by minali singh from qatar are two of the 150 shortlisted entries from the recent designboom competition ‘the intelligent hand’ in collaboration with macef. the jury is almost finished making their selections and the results of the competition will be unveiled on january 15th, 2010. 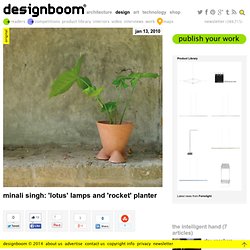 ‘rocket’ planter rocket is a reversible terracotta planter which can be utilized in two ways. smaller plants can be planted in the three small pots on one end of the pot. but the pot can be turned over to provide a larger pot space for bigger plants. the planter is made by attaching three small cones to a larger cone, thrown on a wheel. ‘rocket’ can be used to house larger plants… or flipped over to house smaller plants such as herbs its form is based on a rocket ‘lotus’ lamps up close ‘lotus’ lamps provide a subtle warm glow. Bright (DIY Project) Idea: Coiled-Cord Lamp Shade & Stand. The cord that plugs it into the wall – an inconvenient-but-essential element in nearly any lamp or lighting fixture. 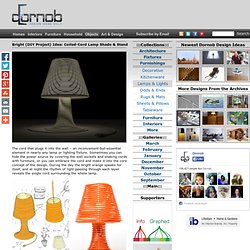 Sometimes you can hide the power source by covering the wall sockets and snaking cords with furniture, or you can embrace the cord and make it into the core concept of the design. During the day the bright orange speaks for itself, and at night the rhythm of light passing through each layer reveals the single cord surrounding the whole lamp. Craighton Berman clearly chose the latter path in crafting a simple frame around which a wound extension cord turns into the very visible outer structure of this object. While it is currently only a table lamp, one could equally well picture (as his drawings above demonstrate) other household lights along the same lines – suspended by third own strand of cable from the ceiling, standing tall around framework on the floor or hanging loosely from the wall. 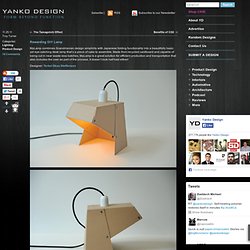 Made from recycled cardboard and capable of being cut in near waste-less batches, MyLamp is a great solution for efficient production and transportation that also includes the user as part of the process. It doesn’t look half bad either! Designer: Terkel Skou Steffensen.