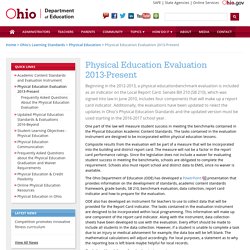 Senate Bill 210 (SB 210), which was signed into law in June 2010, includes four components that will make up a report card indicator. Additionally, the evaluations have been updated to relect the updates in Ohio's Physical Education Standards and the updated version must be used starting in the 2016-2017 school year. One part of the law will measure student success in meeting the benchmarks contained in the Physical Education Academic Content Standards. The tasks contained in the evaluation instrument are designed to be incorporated within physical education lessons. Composite results from the evaluation will be part of a measure that will be incorporated into the building and district report card. 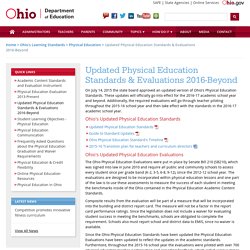 These updates will officially go into effect for the 2016-17 academic school year and beyond. Additionally, the required evaluations will go through teacher piloting throughout the 2015-16 school year and then take effect with the standards in the 2016-17 academic school year. Stark County Physical Education. U.S. ranks near bottom among countries for youth fitness, study says. WASHINGTON, Sept. 22 (UPI) -- If American children were to race children from other countries, chances are, they'd lose. 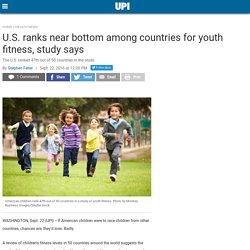 Badly. A review of children's fitness levels in 50 countries around the world suggests the youth of America are not nearly as healthy as they could be, according to researchers at Children's Hospital of Eastern Ontario and the University of North Dakota. The United States landed 47th out of 50 nations when comparing fitness results among the world's children, with Canada coming in 19th -- a far better result than their neighbors to the south -- based on data in the study, published in the British Journal of Sports Medicine. Researchers found income inequality was a strong indicator for average physical fitness among children in the 50 countries, with a larger gap between rich and poor being linked to a nation's children being less physically fit.

"Kids who are aerobically fit tend to be healthy, and healthy kids are apt to be healthy adults. Extra physical education classes may benefit bone health in girls, study shows: A long-term study shows that 200 minutes, as opposed to 60 minutes, of moderately intense physical education classes per week results in significant bone benefits in girls. Moderate to high impact sports such as gymnastics, basketball, or football have been shown to benefit bone mass, structure and strength -- with benefits particularly apparent during pre-and early adolescence. 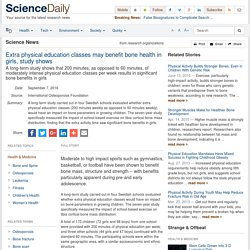 A long-term study carried out in four Swedish schools evaluated whether extra physical education classes would have an impact on bone parameters in growing children. The seven-year study specifically measured the impact of school-based exercise on tibia cortical bone mass distribution. A total of 170 children (72 girls and 98 boys) from one school were provided with 200 minutes of physical education per week, and three other schools (44 girls and 47 boys) continued with the standard 60 minutes. The participating schools were within the same geographic area, with a similar socioeconomic and ethnic structure. The primary findings were independent of age, Tanner stage, bone length, and weight. 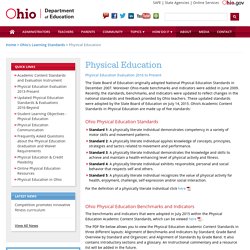 Moreover Ohio-made benchmarks and indicators were added in June 2009. Recently, the standards, benchmarks, and indicators were updated to reflect changes in the national standards and feedback provided by Ohio teachers. These updated standards were adopted by the State Board of Education on July 14, 2015. Middle School Physical Education. Resources - iPhys-Ed.com. iPhys-Ed.com - Home. Top 100 Web Resources for Physical Education: Physical Education Degree. The obesity epidemics sweeping across developed nations aren’t the only reason that physical education is important. 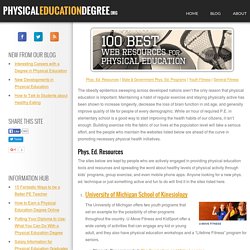 Maintaining a habit of regular exercise and staying physically active has been shown to increase longevity, decrease the loss of brain function in old age, and generally improve quality of life for people of every demographic. While an hour of required P.E. in elementary school is a good way to start improving the health habits of our citizens, it isn’t enough. Building exercise into the fabric of our lives at the population level will take a serious effort, and the people who maintain the websites listed below are ahead of the curve in promoting necessary physical health initiatives. The sites below are kept by people who are actively engaged in providing physical education tools and resources and spreading the word about healthy levels of physical activity through kids’ programs, group exercise, and even mobile phone apps. 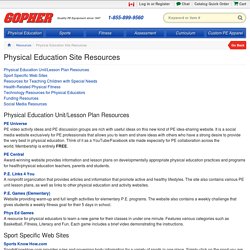 It is a social media website exclusively for PE professionals that allows you to learn and share ideas with others who have a strong desire to provide the very best in physical education. Think of it as a YouTube/Facebook site made especially for PE collaboration across the world. Membership is entirely FREE. Recommended Websites. Physical Education Resources & Lesson Plans. High School Lesson Plans for Physical Education and Health Subjects. Top 10 Reasons For Choosing Abstinence Activity I generated this “Top 10” list after teaching Health for 16 years, but there are certainly other reasons than these 10 for abstinence and you may want to change the 10, adding in your own ideas. 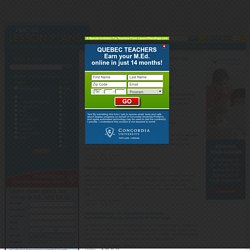