High-altitude ejectives. « previous post | next post » Caleb Everett, "Evidence for Direct Geographic Influences on Linguistic Sounds: The Case of Ejectives", PLoS ONE, 2013: We examined the geographic coordinates and elevations of 567 language locations represented in a worldwide phonetic database. 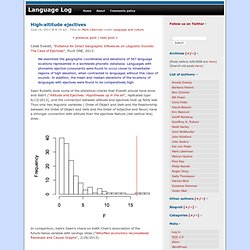 Languages with phonemic ejective consonants were found to occur closer to inhabitable regions of high elevation, when contrasted to languages without this class of sounds. Sonority and Sex: Why smaller communities are louder. Through this post on Sprogmuseet about Atkinson’s analysis of the out of Africa hypothesis, I found an article by Ember & Ember (2007) (who also quantified the link between colour lexicon size and distance from the equator, see my post here) on Sonority and climate. 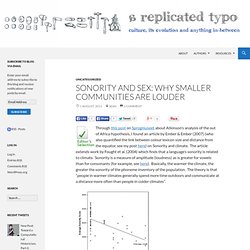 The article extends work by Fought et al. (2004) which finds that a language’s sonority is related to climate. Sonority is a measure of amplitude (loudness) as is greater for vowels than for consonants (for example, see here). Basically, the warmer the climate, the greater the sonority of the phoneme inventory of the population. The theory is that “people in warmer climates generally spend more time outdoors and communicate at a distance more often than people in colder climates”. However, Ember & Ember note a large amount of variation in the colder climates, and ask what the additional factors may be.

Syllable. A syllable is a unit of organization for a sequence of speech sounds. 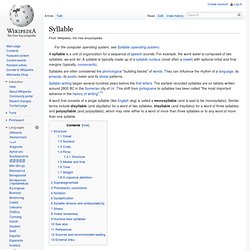 For example, the word water is composed of two syllables: wa and ter. A syllable is typically made up of a syllable nucleus (most often a vowel) with optional initial and final margins (typically, consonants). Syllabic writing began several hundred years before the first letters. Index. Why Do African and English Clicks Sound So Different? It’s All in Your Head. Julie Sedivy is the lead author of Sold on Language: How Advertisers Talk to You And What This Says About You. 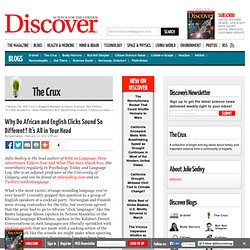 She contributes regularly to Psychology Today and Language Log. She is an adjunct professor at the University of Calgary, and can be found at juliesedivy.com and on Twitter/soldonlanguage. What’s the most exotic, strange-sounding language you’ve ever heard? I recently popped this question to a group of English speakers at a cocktail party. Norwegian and Finnish were strong contenders for the title, but everyone agreed that the prize had to go to African “click languages” like the Bantu language Xhosa (spoken by Nelson Mandela) or the Khoisan language Khoekhoe, spoken in the Kalahari Desert. To English ears, Xhosa speech often comes across a bit like highly-skilled beatboxing, mixing recognizeable speech with what sounds like the clacking of objects striking each other. The Science of Accents. Ice Cream. The San Francisco midsummer fog was late in coming this year, which means Janet and I got a fantastic view of the July 4th fireworks (legal and not-strictly-legal) from the top of Bernal Hill.

Hot days are rare in San Francisco, so random strangers have been smiling at each other on Mission Street and the lines are extra-long on the sidewalks in front of the ice creameries. You may not be aware of the close relationships among these summer phenomena. Ice cream was invented by modifying a technology originally discovered for fireworks. 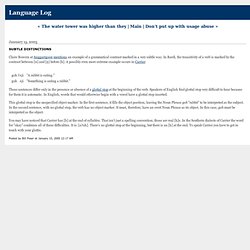 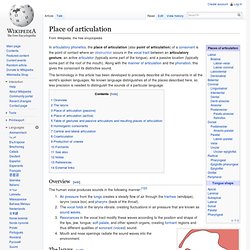 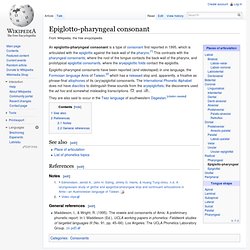 Epiglotto-pharyngeal consonants have been reported (and videotaped) in one language, the Formosan language Amis of Taiwan,[2] which has a released stop and, apparently, a fricative as phrase-final allophones of its (ary)epiglottal consonants. The International Phonetic Alphabet does not have diacritics to distinguish these sounds from the aryepiglottals; the discoverers used the ad hoc and somewhat misleading transcriptions 〈ʕ͡ʡ〉 and 〈ʜ͡ħ〉.

They are also said to occur in the Tsez language of southwestern Dagestan. [citation needed] See also[edit] References[edit] Notes[edit] General references[edit] Phonetics/Phonology. Introduction to Segmental Phonology: Consonants. Autosegmental phonology. Autosegmental phonology is the name of a framework of phonological analysis proposed by John Goldsmith in his PhD thesis in 1976 at the Massachusetts Institute of Technology (MIT). 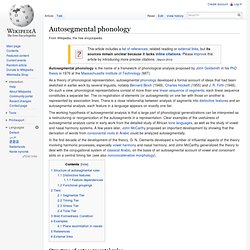 As a theory of phonological representation, autosegmental phonology developed a formal account of ideas that had been sketched in earlier work by several linguists, notably Bernard Bloch (1948), Charles Hockett (1955) and J. R. Phonetics. Phonetics How to set up your computer to use this site Notes. 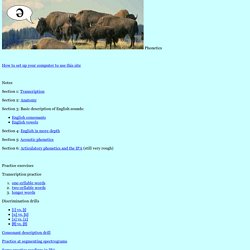 Intonation. Intonation: Intonation contours in English Not all rises and falls in pitch that occur in the course of an English phrase can be attributed to stress. 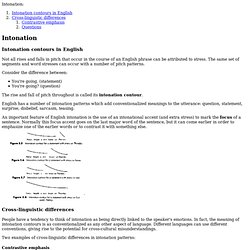 The same set of segments and word stresses can occur with a number of pitch patterns. Consider the difference between: You're going. English has a number of intonation patterns which add conventionalized meanings to the utterance: question, statement, surprise, disbelief, sarcasm, teasing. Sound/IPA symbols. International Phonetic Alphabet (IPA) Chart Unicode “Keyboard” Contents page for Course. Title Page. LINGUIST List 7.826: Phoneme inventory size and word length. Phonemic diversity decays “out of Africa”? Category:Sound laws. On geographic determinism and nasal vowels in French. In a rece nt post, I discussed one example of geographic determinism applied to linguistic typology. The thinking behind geographic determinism is as follows: certain kinds of terrain or weather favor certain structural features in languages, so languages adapt to better suit their location.

Today, I will examine one more example of a climatic explanation failing to account for properties of various languages. This often-cited example concerns nasal vowels in Romance languages: it is pointed out that, of the three major Romance languages, only French has nasal vowels, whereas Spanish and Italian do not. Why? A climatic explanation has been at times proposed: after all, Standard French developed in the region of Paris, Île-de-France, which is famously damp and foggy.

Sine-wave speech demos. Vocal Vowels: Exploratorium Exhibit. Hollow plastic models of the human vocal tract turn the squawk of a duck call into vowel sounds. The diva and the emcee. This is something I wish I’d had in phonetics...