Philosophy of mind. How we (should) decide. Caspar Hare is interested in your choices. 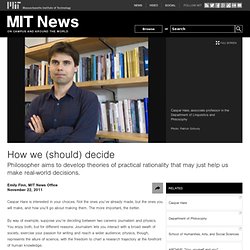 Not the ones you’ve already made, but the ones you will make, and how you’ll go about making them. The more important, the better. By way of example, suppose you’re deciding between two careers: journalism and physics. You enjoy both, but for different reasons: Journalism lets you interact with a broad swath of society, exercise your passion for writing and reach a wider audience; physics, though, represents the allure of science, with the freedom to chart a research trajectory at the forefront of human knowledge. Suppose, too, for argument’s sake, that you had a pretty good idea of how each career would turn out. Addicts, Mythmakers and Philosophers. Plato Alan Brody explains Plato’s/Socrates’ understanding of habitually bad behavior. 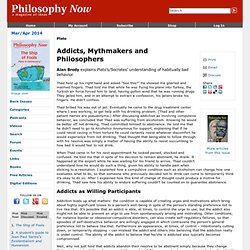 Thad held up his right hand and asked “See this?” He showed me gnarled and maimed fingers. Thad told me that while he was flying his plane into Turkey, the Turkish air force forced him to land, having gotten wind that he was running drugs. They jailed him, and in an attempt to extract a confession, his jailers broke his fingers. Thad bribed his way out of jail. When Thad came in for his next appointment he looked pained, shocked and confused. Addicts as Willing Participants Addiction busts up what matters: the condition is capable of creating urges and motivations which bring about highly significant losses to a person’s well-being in spite of the person’s standing preference not to live like that.

Well, why not just hold that addicts abandon their resolve to be abstinent simply because they change their minds, and not through some sort of compulsion? Model Behavior Simplicity Itself The Devil’s Gambit. Philosophy and Addiction. The Stone is a forum for contemporary philosophers and other thinkers on issues both timely and timeless. 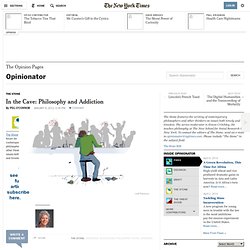 Philosophy is one of the oldest areas of inquiry. Out of control behavior fueled by alcohol and other drugs is one of the world’s oldest problems. I Think, Therefore I Exercise: Philosophy and Health. Most people have no formal training in philosophy, none whatsoever, yet we all have core philosophical beliefs. 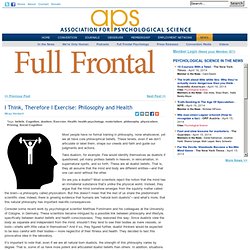 These tenets, even if we don’t articulate or label them, shape our creeds and faith and guide our judgments and actions. Take dualism, for example. Few would identify themselves as dualists if questioned, yet many profess beliefs in heaven, in reincarnation, in supernatural spirits, and so forth. These are all dualist beliefs. That is, they all assume that the mind and body are different entities—and that one can exist without the other. So are you a dualist? Consider some recent work by psychological scientist Matthias Forstmann and his colleagues at the University of Cologne, in Germany. It’s important to note that, even if we are all natural born dualists, the strength of this philosophy varies by degree. All of the experiments were basically the same in structure. So might real-life behavior be changed for the good, in similar fashion? 4 Simple Ways to Experience Great Happiness and True Freedom.

“It takes courage to grow up and turn out to be who you really are.” 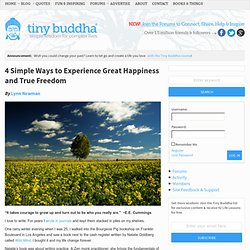 ~E.E. Cummings I love to write. For years I wrote in journals and kept them stacked in piles on my shelves. One rainy winter evening when I was 25, I walked into the Bourgeois Pig bookshop on Franklin Boulevard in Los Angeles and saw a book next to the cash register written by Natalie Goldberg called Wild Mind. Natalie’s book was about writing practice.

Set a timer and write without stopping your pen—without crossing out or editing. Writing in personal journals was my sacred time just for myself, to have permission to go wild, reach my depths, and be truly free. As fate would have it, I ended up taking a workshop with Natalie in Taos, New Mexico and we become friends. Looking back at the many journals I collected, I see the writing met me for that moment in time, but that once it came out of me onto the paper, it was no longer a part of “me.” It came through me but was not of me. 1. 2. Try this: Don’t believe me. 3. 5 Scientific Reasons Your Idea of Happiness Is Wrong. Our two favorite subjects at Cracked are the elusive concept of human happiness and Batman. 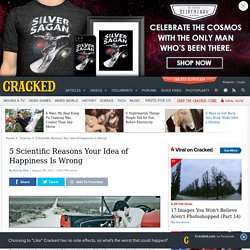 This article is about the first one. If you're looking for an answer to "How can I be happy? " then the response from the experts is, "You're asking the wrong question. " Maslow 2.0: A New and Improved Recipe for Happiness - Hans Villarica - Life. A study based on a survey of thousands of people from 123 countries reveals the universal needs that make us happy What are the ingredients for happiness? 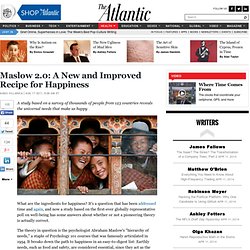 It's a question that has been addressed time and again, and now a study based on the first-ever globally representative poll on well-being has some answers about whether or not a pioneering theory is actually correct. The theory in question is the psychologist Abraham Maslow's "hierarchy of needs," a staple of Psychology 101 courses that was famously articulated in 1954. It breaks down the path to happiness in an easy-to-digest list: Earthly needs, such as food and safety, are considered essential, since they act as the groundwork that makes it possible to pursue loftier desires, such as love, respect, and self-actualization (the realization of one's full potential).

The problem is, Maslow's theory remained a theory.