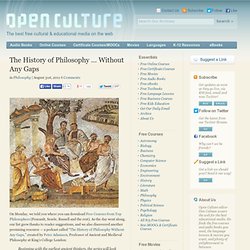 As the day went along, our list grew thanks to reader suggestions, and we also discovered another promising resource — a podcast called “The History of Philosophy Without Any Gaps,” created by Peter Adamson, Professor of Ancient and Medieval Philosophy at King’s College London: Beginning with the earliest ancient thinkers, the series will look at the ideas and lives of the major philosophers (eventually covering in detail such giants as Plato, Aristotle, Avicenna, Aquinas, Descartes, and Kant) as well as the lesser-known figures of the tradition. 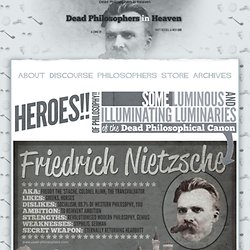 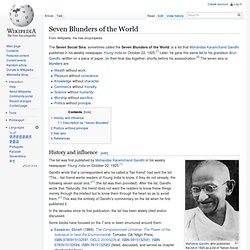 8 Great Philosophical Questions That We'll Never Solve. Top 10 Philosophical One Liners. Miscellaneous Philosophy is no more or less than the search for wisdom. 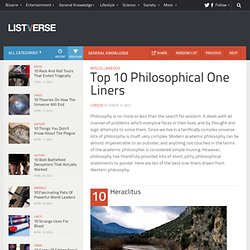 It deals with all manner of problems which everyone faces in their lives, and by thought and logic attempts to solve them. Since we live in a terrifically complex universe lots of philosophy is itself, very complex. 7 Lessons From 7 Great Minds. Have you ever wished you could go back in time and have a conversation with one of the greatest minds in history? 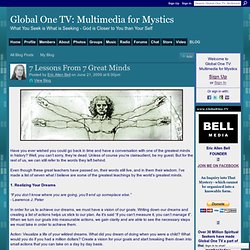 Well, you can’t sorry, they’re dead. Unless of course you’re clairaudient, be my guest. But for the rest of us, we can still refer to the words they left behind. Even though these great teachers have passed on, their words still live, and in them their wisdom. 50 Questions That Will Free Your Mind. 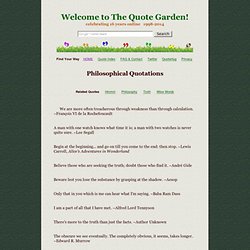 ~François VI de la Rochefoucault A man with one watch knows what time it is; a man with two watches is never quite sure. ~Lee Segall Begin at the beginning... and go on till you come to the end: then stop. Believe those who are seeking the truth; doubt those who find it. Occupy Philosophy! Smack in the middle of the holidays, on a Wednesday night in very late December, about 150 people—philosophy professors and graduate students—gathered in a hotel conference room in Washington, DC, for a panel called, “Thinking Occupation: Philosophers Respond to Occupy Wall Street.” 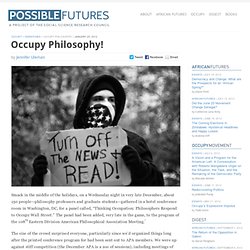 The panel had been added, very late in the game, to the program of the 108th Eastern Division American Philosophical Association Meeting. The size of the crowd surprised everyone, particularly since we’d organized things long after the printed conference program for had been sent out to APA members. We were up against stiff competition (the December APA is a zoo of sessions), including meetings of the International Association for Environmental Philosophy, the Hegel Society of America, the Radical Philosophy Association, and the Society for the History of Political Philosophy, among many others.

How To Be A Philosopher. Articles Ian Ravenscroft philosophizes about philosophizing. 1. What to Wear Philosophers rarely get worked up about clothing. Clothes can be a source of aesthetic pleasure, and few philosophers are adamantly opposed to pleasure. One of the intriguing things about authorities and authoritarian regimes is their fascination with uniforms and playing dress-up. 2. Graphing the history of philosophy. A close up of ancient and medieval philosophy ending at Descartes and Leibniz If you are interested in this data set you might like my latest post where I use it to make book recommendations. 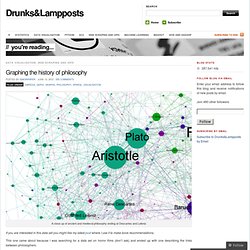 This one came about because I was searching for a data set on horror films (don’t ask) and ended up with one describing the links between philosophers. To cut a long story very short I’ve extracted the information in the influenced by section for every philosopher on Wikipedia and used it to construct a network which I’ve then visualised using gephi It’s an easy process to repeat. It could be done for any area within Wikipedia where the information forms a network. First I’ll show why I think it’s worked as a visualisation. Philprettyv4.png (4000×4000) Philo-final-mid-res.png (4520×4196) Brain of mat kelcey. (update: like all interesting things it turns out someone else had already done this :D) questions a recent xkcd posed the idea... wikipedia trivia: if you take any article, click on the first link in the article text not in parentheses or italics, and then repeat, you will eventually end up at Philosophy. this raises a number of questions Q: though i wouldn't be surprised if it's true for most articles it can't be true for all articles. can it? 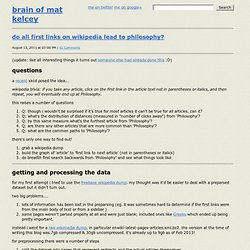 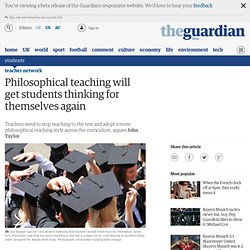 I'm not alone in believing this. In a recent Cambridge Assessment Research Survey, 87% of lecturers said that too much teaching to the test is a major factor contributing to students being under-prepared for degree-level study. With such widespread agreement about this, you would think that the issue of how assessment pressure is distorting teaching would be at the centre of the debate about A-level reform. Instead, the discussion so far has focused on assessment structure (modular versus linear) and standards (bringing in HE to restore rigour and counter 'grade inflation').

But if real teaching has given way to a process of training students to jump through assessment hoops, HE concerns aren't going to be met simply by reducing the number of hoops, or by lifting them higher. But there is a false antithesis here. Internet Encyclopedia of Philosophy. Philosophers and Their Works. The Philosophy of Neuroscience.

First published Mon Jun 7, 1999; substantive revision Tue May 25, 2010 Over the past three decades, philosophy of science has grown increasingly “local.” Concerns have switched from general features of scientific practice to concepts, issues, and puzzles specific to particular disciplines. Game Theory. First published Sat Jan 25, 1997; substantive revision Wed May 5, 2010 Game theory is the study of the ways in which strategic interactions among economic agents produce outcomes with respect to the preferences (or utilities) of those agents, where the outcomes in question might have been intended by none of the agents. The meaning of this statement will not be clear to the non-expert until each of the italicized words and phrases has been explained and featured in some examples. Doing this will be the main business of this article.

First, however, we provide some historical and philosophical context in order to motivate the reader for the technical work ahead. 1. The mathematical theory of games was invented by John von Neumann and Oskar Morgenstern (1944). Despite the fact that game theory has been rendered mathematically and logically systematic only since 1944, game-theoretic insights can be found among commentators going back to ancient times. Logical Paradoxes. Carl Jung - Approaching the Unconscious. Consciousness / Philosophy. Philosophy. Philosophy. Despertare. Logos. Logos (UK /ˈloʊɡɒs/, /ˈlɒɡɒs/, or US /ˈloʊɡoʊs/; Greek: λόγος, from λέγω lego "I say") is an important term in philosophy, psychology, rhetoric, and religion. Originally a word meaning "a ground", "a plea", "an opinion", "an expectation", "word", "speech", "account", "to reason"[1][2] it became a technical term in philosophy, beginning with Heraclitus (ca. 535–475 BC), who used the term for a principle of order and knowledge.[3]

Aro. Zeno's "Paradox of the Arrow" passage from Biocentrismby Robert Lanza M.D.Related Posts:The Paradox Of The Infinite CircleThe Liar ParadoxThe Barber Paradox Tags: paradoxes Posted in Time Comments It's just an exercise in logic by an ancient philosopher. Chardin & The NooSphere. PHILOSOPHY. Carl Jung: Sea of Faith [FULL DOCUMENTARY] Philosophy of mind. A phrenological mapping[1] of the brain – phrenology was among the first attempts to correlate mental functions with specific parts of the brain Philosophy of mind is a branch of philosophy that studies the nature of the mind, mental events, mental functions, mental properties, consciousness, and their relationship to the physical body, particularly the brain.

The mind–body problem, i.e. the relationship of the mind to the body, is commonly seen as one key issue in philosophy of mind, although there are other issues concerning the nature of the mind that do not involve its relation to the physical body, such as how consciousness is possible and the nature of particular mental states.[2][3][4] Mind–body problem[edit] Our perceptual experiences depend on stimuli that arrive at our various sensory organs from the external world, and these stimuli cause changes in our mental states, ultimately causing us to feel a sensation, which may be pleasant or unpleasant.

Arguments for dualism[edit] Guide to the Philosophy of Mind. Visualizing the History of Philosophy as a social network: The Problem with Hegel. Introduction This is Part I of a series. The Graph Of Ideas. Update: Graph has now been made interactive. Philosophy: Free Courses. Advertisement Get free Philosophy courses from the world's leading universities. You can download these audio & video courses straight to your computer or mp3 player.

For more online courses, visit our complete collection, 1,300 Free Online Courses from Top Universities. 10 Mind-Blowing Theories That Will Change Your Perception of the World. Reality is not as obvious and simple as we like to think. Great Quotes About Health And Fitness – Best Photo Quotes. 9 Mind-Bending Epiphanies That Turned My World Upside-Down. Over the years I’ve learned dozens of little tricks and insights for making life more fulfilling. 30 Essential Reads for Philosophy Majors.