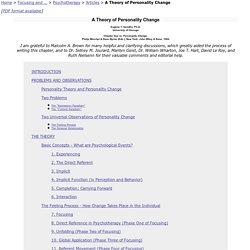 Gendlin, Ph.D. University of Chicago Chapter four in: Personality Change, Philip Worchel & Donn Byrne (Eds.), New York: John Wiley & Sons, 1964 I am grateful to Malcolm A. Brown for many helpful and clarifying discussions, which greatly aided the process of writing this chapter, and to Dr. 278-316_CH08_61939. Personality psychology. Personality Theories. Defense Mechanisms: Neuroscience Meets Psychoanalysis. Nothing is so difficult as not ­deceiving oneself. 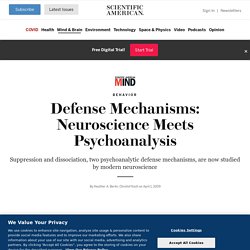 —Ludwig Wittgenstein How much of what you consciously experience in your daily life is influenced by hidden unconscious processes? This mystery is one of the many that continue to confound our understanding of ourselves. We do not know how conscious impulses, desires or motives become unconscious or, conversely, how unconscious impulses, desires or motives suddenly become conscious. Advances in technologies such as functional magnetic resonance imaging permit scientists to directly measure brain activity. Suppression is the voluntary form of repression proposed by Sigmund Freud in 1892. If you are grieving over the death of a loved one or the breakup of a relationship, you may consciously decide to suppress thinking about the situation to get on with your life.

Although some claim that suppression is a psychoanalytical myth with no scientific support, fMRI data suggest otherwise. Psychodynamic theories of personality - Freud, Erikson and Adler. Refutation and the appropriation of tru - PubMed Mobile. How Unconscious Mechanisms Affect Thought. WHAT IS CONSCIOUSNESS? 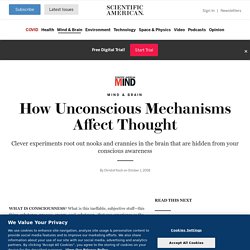 What is this ineffable, subjective stuff—this thing, substance, process, energy, soul, whatever—that you experience as the sounds and sights of life, as pain or as pleasure, as anger or as the nagging feeling at the back of your head that maybe you’re not meant for this job after all. The question of the nature of consciousness is at the heart of the ancient mind-body problem. How does subjective consciousness relate to the objective universe, to matter and energy? Consciousness is the only way we experience the world. Without it, you would be like a sleepwalker in a deep, dreamless sleep, acting in the world, speaking, having babies, but without feeling anything. Yet the questions go on. Until recently, these questions were purely within the domain of speculative philosophy and fantasy. I am a scientist who seeks rational explanations of ineffable consciousness and of how and why it arises in the brain. Solomon Asch: Forming Impressions of Personality (Free Full Text) 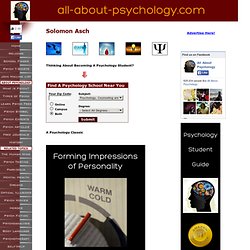 Find A Psychology School Near You A Psychology Classic (Warm Cold. Image by Jeremy Brooks via flickr CC BY-NC 2.0) Forming Impressions of Personality by Solomon Asch is a classic study in the psychology of interpersonal perception. This is the journal article which introduced the concept of central versus peripheral traits and the "halo effect". 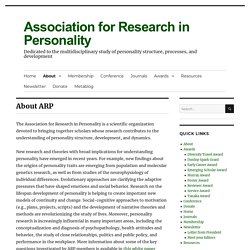 New research and theories with broad implications for understanding personality have emerged in recent years. For example, new findings about the origins of personality traits are emerging from population and molecular genetics research, as well as from studies of the neurophysiology of individual differences. Evolutionary approaches are clarifying the adaptive pressures that have shaped emotions and social behavior. Research on the lifespan development of personality is helping to create important new models of continuity and change. Social-cognitive approaches to motivation (e.g., plans, projects, scripts) and the development of narrative theories and methods are revolutionizing the study of lives. 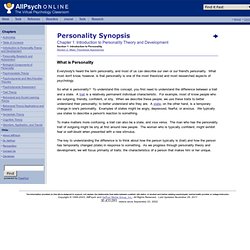 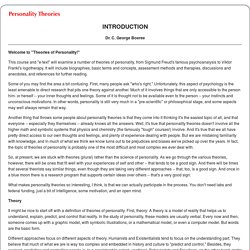 C. George Boeree Welcome to "Theories of Personality! " This course and "e-text" will examine a number of theories of personality, from Sigmund Freud's famous psychoanalysis to Viktor Frankl's logotherapy. It will include biographies, basic terms and concepts, assessment methods and therapies, discussions and anecdotes, and references for further reading. Some of you may find the area a bit confusing. Another thing that throws some people about personality theories is that they come into it thinking it's the easiest topic of all, and that everyone -- especially they themselves -- already knows all the answers.

So, at present, we are stuck with theories (plural) rather than the science of personality. What makes personality theories so interesting, I think, is that we can actually participate in the process. Theory. Personality. Personality refers to individual differences in characteristic patterns of thinking, feeling and behaving. 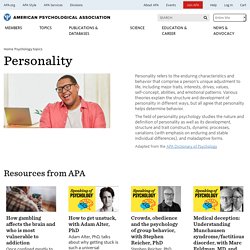 The study of personality focuses on two broad areas: One is understanding individual differences in particular personality characteristics, such as sociability or irritability. The other is understanding how the various parts of a person come together as a whole. The Personality Laboratory at UNH.