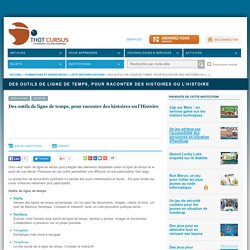 This free texture pack contains 7 unique mixed grunge textures that can be used in a variety of situations. 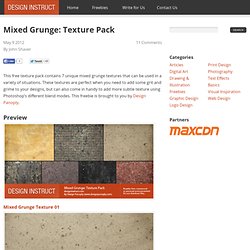 These textures are perfect when you need to add some grit and grime to your designs, but can also come in handy to add more subtle texture using Photoshop’s different blend modes. This freebie is brought to you by Design Panoply. Preview Mixed Grunge Texture 01. iSpring Pro Authoring Tool Review. Sharebar One of the best kept secrets in our industry is the line of products made by iSpring. 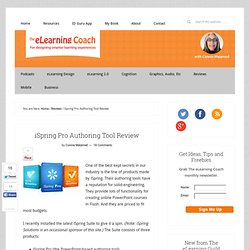 Their authoring tools have a reputation for solid-engineering. They provide lots of functionality for creating online PowerPoint courses in Flash. And they are priced to fit most budgets. I recently installed the latest iSpring Suite to give it a spin. Putting a Photeo Together (Part 2 of 5) by Stephen Haskin & Megan Torrance. “Generally the software you’ll use falls into several categories, but there are a few programs that just can’t be put into a category, so are a category of their own. 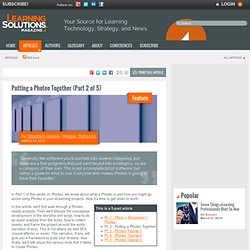 This is not a complete list of software, but rather a guide to what to use. Everyone who makes Photeo is going to have their favorites.” In Part 1 of this series on Photeo, we wrote about what a Photeo is and how you might go about using Photeo in your eLearning projects. Now it’s time to get down to work! Development Tips: A Little CSS by Mark Lassoff. “There are dozens and dozens of style rules that you can use that can control just about every possible variable in an element’s appearance. 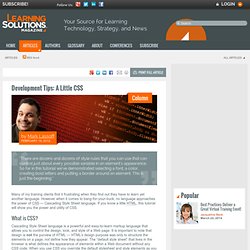 So far in this tutorial we’ve demonstrated selecting a font, a color, creating bold letters and putting a border around an element. This is just the beginning.” Many of my training clients find it frustrating when they find out they have to learn yet another language. However when it comes to bang-for-your-buck, no language approaches the power of CSS — Cascading Style Sheet language. If you know a little HTML, this tutorial will show you the power and utility of CSS. What is CSS? Toolkit: News from the Tools Front by Joe Ganci. “New tools are coming at a rapid pace. Plant your feet firmly on the ground, lift up your shield, and prepare for the onslaught. As each tool vendor marches forward with its two banners, Most Powerful and Easy to Use, the battle lines will be drawn.” I have been spending so much time talking with eLearning development tool vendors lately that you would think I’ve become a bit obsessed.

You would not be far off the mark. As I go to conference expos, as I receive daily e-mails from my subscriptions, as I evaluate tools, I find myself sometimes getting excited and sometimes scratching my head. Un guide sur les technologies et outils de formation en ligne. Create m-Learning interactions for tablets, iPad, iPhone and smart-phones. With the increased use of smart phones and tablets in education, eLearning course developers are looking to effectively leverage mobile devices as new training mediums. 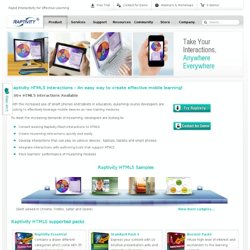 To meet the increasing demands of mLearning, developers are looking to. You Need to Know These Seven Tips If You Build Graphics for E-Learning. If you’re building elearning courses, then you should expect to have a graphics editing program as part of your tool chest. 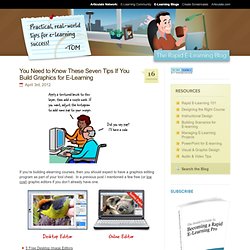 In a previous post I mentioned a few free (or low cost) graphic editors if you don’t already have one. There’s even a good discussion about graphics applications in the elearning community. Jump in and share a favorite of yours. There’s a difference between having a graphics application and being a professional graphics artist. Many of us work alone and have to do our own graphics. Photos + Movement = Photeo (Part 1 of 3) by Stephen Haskin & Megan Torrance. “In eLearning, the idea is to create the opportunity for the learner to have an “ah-ha!” 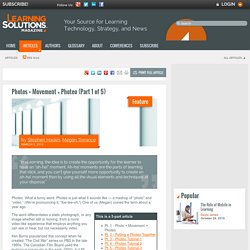 Moment. Ah-ha! Infographics & Data Visualizations. Advance Organisers. Isn't it nice to find out that something you have been doing all along has a jargon name? 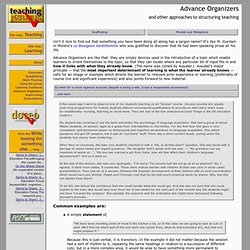 It's like M. Jourdain in Molière's Le Bourgeois Gentilhomme who was gratified to discover that he had been speaking prose all his life. Advance Organizers are like that: they are simply devices used in the introduction of a topic which enable learners to orient themselves to the topic, so that they can locate where any particular bit of input fits in and how it links with what they already know. (The name was coined by Ausubel.) Ausubel's major principle — that the most important determinant of learning is what the learner already knows — calls for an image or example which directs the learner to relevant prior experience or learning (preferably of course live and significant experience) and also points forward to new material. Usages pédagogiques de Wordle. Outils auteurs VS enrichisseurs. CamStudio - Free Screen Recording Software. eLearning Art - training photos, training images, e-learning images, characters, and templates.

Storyboard avec un iPad. Learning HTML with Notepad. 10 Helpful Tips for Using PowerPoint for E-Learning. We all know that PowerPoint is an amazing tool in the world of E-Learning software. 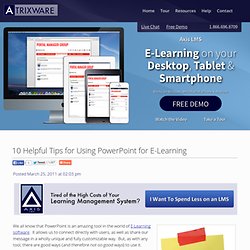 It allows us to connect directly with users, as well as share our message in a wholly unique and fully customizable way. But, as with any tool, there are good ways (and therefore not-so-good ways) to use it. So today, in hopes of helping you to solve the PowerPoint puzzle, I’d like to share a few tips that have worked for me along the way. Nothing too fancy, just a great place to start when it comes to building presentations of your own! 1. 25 More Free Display Graphics for Your E-Learning Courses. In a previous post, I share 15 free display graphics that are commonly seen in elearning courses. In today’s post, I’m adding a few more. The cool thing is that all of these are created in PowerPoint; so you can learn to build your own.

The steps are simple. They’re generally just rectangles with some sort of fill. Then right-click on the graphic and save as an image. Development Tips: A Little CSS by Mark Lassoff. “There are dozens and dozens of style rules that you can use that can control just about every possible variable in an element’s appearance. So far in this tutorial we’ve demonstrated selecting a font, a color, creating bold letters and putting a border around an element.

This is just the beginning.” Many of my training clients find it frustrating when they find out they have to learn yet another language. However when it comes to bang-for-your-buck, no language approaches the power of CSS — Cascading Style Sheet language. If you know a little HTML, this tutorial will show you the power and utility of CSS. Is It Video Smackdown Time? Final Cut Pro X vs. The World by Stephen Haskin. “This release of FCPX (10.0.3) resolves some of the issues that editors of all sorts had with FCPX since its initial release. The product is getting better with each new release according to some editors, yet it still doesn’t offer the robust feature set professional editors need for their work.” On January 31, 2012 Apple released the latest upgrade to their top video-editing software program, Final Cut Pro X (FCPX).

This is the fourth update to the original release of FCPX last June. Although the professional video-editing community anxiously anticipated Final Cut Pro X, last year’s release created a howl of protest. Significant release, but is it enough? The online firestorm was so loud you could almost hear the Mac Pro DVD drives spinning and new versions of Premiere Pro or Avid being loaded. This release of FCPX (10.0.3) resolves some of the issues that editors of all sorts had with FCPX since its initial release.

The Mac Pro problem. Reverse Instruction Tools And Techniques (Part 2) – Screencasting. Adding voice-over and other enhancements to lecture materials and putting them online to give the ‘flipped classroom’ a try. This is the second in a series of articles examining software tools and methods for placing and using learning materials online, or distributing them via other digital methods, so that instructors who wish to can have a go at reverse instruction in courses that they teach. For those new to the idea, reverse instruction (a.k.a. ‘flipping the classroom’) basically consists of having students consume learning content that was traditionally delivered during class sessions outside of the classroom as homework, leaving more face-to-face classroom time to work on assignments and review and reinforce learning.

Beginning Instructional Authoring: Selecting Self-Paced Authoring Tools (Part 2) by Patti Shank. “Once you determine what you need to build, you can judge the tools that can build what you need by these criteria. eLearning Tools. E-Clippings (Learning As Art) So to all the folks who had a moment of crisis about seeing Ender's Game because of the hateful comments of the book's author, as wrong and misguided as I thought that protest would be (since the message of the movie countered those hateful comments), this letter, this makes me want to cross Wolf of Wall Street off my list.