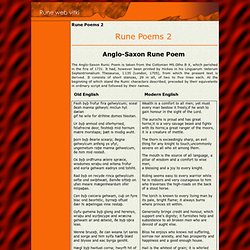 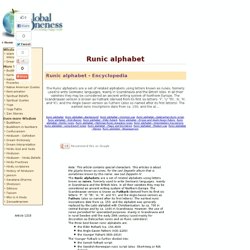 This articles is about the glyphs known as runes, for the Led Zeppelin album that is sometimes known by this name, see Led Zeppelin IV. The Runic alphabets are a set of related alphabets using letters known as runes , formerly used to write Germanic languages, mainly in Scandinavia and the British Isles. In all their varieties they may be considered an ancient writing system of Northern Europe. The Scandinavian version is known as Futhark (derived from its first six letters: 'F', 'U' 'Th', 'A', 'R', and 'K'), and the Anglo-Saxon version as Futhorc (also so named after its first letters). The earliest runic inscriptions date from ca. 150, and the alphabet was generally replaced by the Latin alphabet with Christianisation, by ca. 700 in central Europe and by ca. 1400 in Scandinavia. The three best known runic alphabets are: the Elder Futhark (ca. 150–800) the Anglo-Saxon Futhorc (400–1100) the Younger Futhark (800–1910)

Facts and Figures: The Norse Way. Runic alphabets provided a brief background about the mystical lettering systems used by the Germanic people in ancient and medieval times. 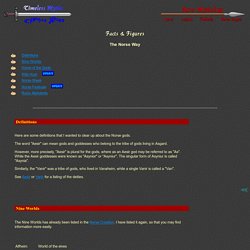 The Odinist Fellowship. Odinism is the name we give to the original, indigenous form of heathen religion practised by our forefathers, the Angles, Saxons and Jutes, and by the related Teutonic peoples of the Continent. 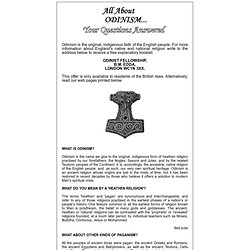 It is, accordingly, the ancestral, native religion of the English people, and, as such, our very own spiritual heritage. Odinism is an ancient religion whose origins are lost in the mists of time, but it has been restored in recent decades by those who believe it offers a solution to modern Man's spiritual crisis. The terms 'heathen' and 'pagan' are synonymous and interchangeable, and refer to any of those religions practised in the earliest phases of a nation's or people's history.

One feature common to all the earliest forms of religion known to Man is polytheism, the belief in many gods and goddesses. Back to top. Woden, Odin and the Runes. Home - Rune Healing: Mind, Body & Spirit.