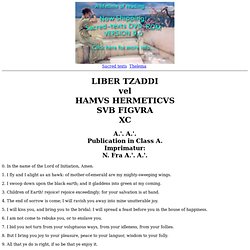 In the name of the Lord of Initiation, Amen. 1. I fly and I alight as an hawk: of mother-of-emerald are my mighty-sweeping wings. An Open Letter to those who may wish to join the Order. Sacred texts Thelema These Regulations Come into Force in Any District Where the Membership of the Order Exceeds One Thousand Souls These regulations first appeared in The Equinox III(1) (Detroit: Universal, 1919) and constitute our best and most comprehensive guidelines for Thelemic social intercourse. 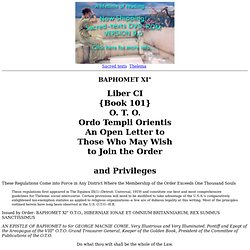 Certain provisions will need to be modified to take advantage of the U.S.A.'s comparatively enlightened tax-exemption statutes as applied to religious organizations--a few are of dubious legality at this writing. Most of the principles outlined herein have long been observed in the U.S. Issued by Order: BAPHOMET XI° O.T.O., HIBERNIAE IONAE ET OMNIUM BRITANNIARUM, REX SUMMUS SANCTISSIMUS AN EPISTLE OF BAPHOMET to Sir GEORGE MACNIE COWIE, Very Illustrious and Very Illuminated, Pontiff and Epopt of the Areopagus of the VIII° O.T.O. 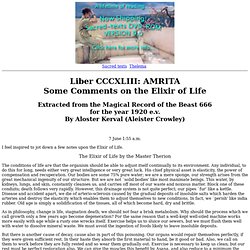 I feel inspired to jot down a few notes upon the Elixir of Life. The Elixir of Life by the Master Therion The conditions of life are that the organism should be able to adjust itself continually to its environment. Any individual, to do this for long, needs either very great intelligence or very great luck. As in philosophy, change is life, stagnation death; we should not fear a brisk metabolism. But there is another cause of decay, cause also in part of this poisoning. The Hindus, to whom we owe these practices, realize also (as I, above) that the solidity of the food is an objection. But mankind--in temperate climes--does not ask merely to exist; it demands joy; and joy, physiologically speaking, consists in the expenditure of surplus energy. We admire the frolics of the young horse turned out to grass; we cultivate rough games, wild sports, and athletics. To our copper wire again! Nature everywhere is prolific of live things, animal and vegetable. 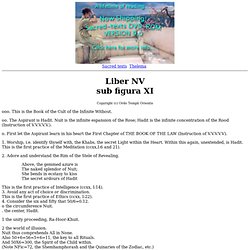 Liber 9 - Liber E vel Exercitiorum. Thelema Texts. Sacred-texts home Esoteric Neopaganism OCRT - Thelema Buy Books about Thelema Copyrights on these texts Additional and Related Texts These are texts relating to the philosophy of Thelema, many of them written by the occultist Aleister Crowley who founded the organization A.'. 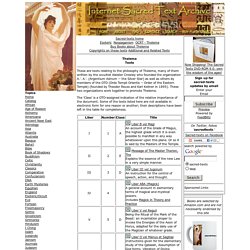 A.'. (Argentium Astrum -- the Silver Star) as well as others by members of the OTO (Ordo Templi Orientis -- Order of the Eastern Temple) (founded by Theodor Reuss and Karl Kellner in 1895). These two organizations work together to promote Thelema. The 'Class' is a OTO-assigned indication of the relative importance of the document. Note: the OTO has claimed copyright on some of these documents (even though many are technically in the public domain by prevailing copyright laws); however, OTO texts have long been widely available on the web for non-commercial reproduction. Additional and related texts I.N.R.I.: De Mysteriis Rosæ Rubeæ et Aureæ Crucis, by Frater Achad [1924]   Ordo Templi Orientis. US Grand Lodge, OTO: US Local Bodies.

OTO Manifesto. Sacred texts Thelema Issued by Order: Peace, Tolerance, Truth; Salutation on All Points of the Triangle; Respect To the Order. 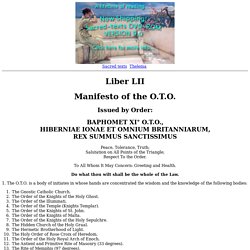 To All Whom It May Concern: Greeting and Health. Do what thou wilt shall be the whole of the Law. 1. The Gnostic Catholic Church. It does not include the A.·.A.·., with which august body it is, however, in close alliance. It does not in any way infringe the just privileges of duly authorized Masonic Bodies. 2. It embodies the whole of the secret knowledge of all Oriental Orders; and its chiefs are initiates of the highest rank, and recognized as such by all capable of such recognition in every country in the world. Richard Gernon Performing Star Ruby.