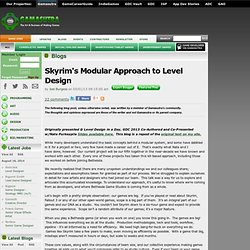 The thoughts and opinions expressed are those of the writer and not Gamasutra or its parent company. While many developers understand the basic concepts behind a modular system, and some have dabbled in it for a project or two, very few have made a career out of it. That’s exactly what Nate and I have done, however. Our current project will be our fifth together in the near-decade we have known and worked with each other. Every one of these projects has taken this kit-based approach, including those we worked on before joining Bethesda. We recently realized that there are many unspoken understandings we and our colleagues share; expectations and assumptions taken for granted as part of our process. Let's begin with a pretty simple observation: our games are big. When you play a Bethesda game (or when you work on one) you know this going in. With that in mind, consider this a case study. FM 3-21.10 Chapter 5 — DEFENSIVE OPERATIONS. 5 tips for making more believable open world cities.

It has often been said that the true star of Rockstar's groundbreaking Grand Theft Auto IV was not lead character Niko Bellic but, rather Liberty City itself, a fictional metropolis modeled after New York City. Creating a breathing, living city is one of the toughest challenges facing developers of open world games today: get it wrong, and your player feels like she's walking through a lifeless television set with cheap props and false fronts for buildings.

Get it right, and she'll be absorbed enough in your world to momentarily forget she's playing a game at all. Ubisoft Montreal is among the best in the business at creating believable cities thanks to its Assassin's Creed series. We sat down with Alex Hutchinson, creative director of the upcoming Assassin's Creed III, for his tips on making a city feel alive.

Joel Burgess: GDC 2011 Transcript: Motivating Players in Open World Games. Are basically useless on their own. 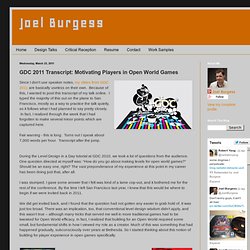 Because of this, I wanted to post this transcript of my talk online. I typed the majority of this out on the plane to San Francisco, mostly as a way to practice the talk quietly, so it follows what I had planned to say pretty closely. In fact, I realized through the week that I had forgotten to make several minor points which are captured here. Fair warning - this is long. Turns out I speak about 7,000 words per hour. Embracing the Chaos: Freedom as the Cornerstone for Open World Mission Design. [The design director of Volition/THQ's expansive open world action title Red Faction: Guerrilla talks about the transition from being scared of player freedom to truly embracing it, including several case studies of specific missions in the game and they evolved to support meaningful player interaction.] 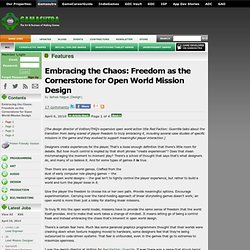 Designers create experiences for the player. That's a loose enough definition that there's little room for debate. But how much control is implied by that short phrase "create experiences"? Does that mean micromanaging the moment to moment play? 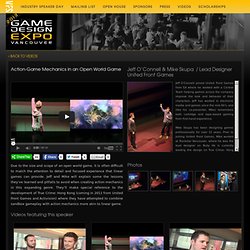 Jeff and Mike will explain some the lessons they’ve learned and pitfalls to avoid when creating action mechanics in this expanding genre. They’ll make special reference to the development of True Crime: Hong Kong (coming in 2011 from United Front Games and Activision) where they have attempted to combine sandbox gameplay with action mechanics more akin to linear game. Jeff O’Connell & Mike Skupa / Lead Designer United Front Games Jeff O’Connell joined United Front Games from EA where he worked with a Central Team helping games across the company improve the look and behavior of their characters. Mike Skupa has been designing games professionally for over 15 years. Size isn't the only thing that matters: An analysis of open-world and sandbox games. Two major styles of game design which have begun to show up in increasing numbers over the last several years are open-world games, and sandbox games. 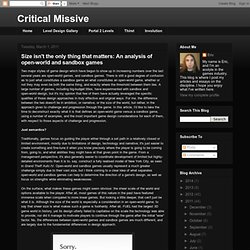 There is still a good degree of confusion as to just what constitutes a sandbox game an what constitutes an open-world game, whether or not they may even be both the same thing, and exactly where the threshold between them lies. A large number of games, including big-budget titles, have experimented with sandbox and open-world design, but it's my opinion that few of them have actually leveraged the specific qualifies of those design approaches in truly effective and original ways. For me, the difference between the two doesn't lie in ambition, or narrative, or the size of the world, but rather, in the approach given to challenge and progression through the game. Just semantics? On the surface, what makes these games might seem obvious: the sheer scale of the world and options available to the player.

6 Essential Ingredients for an Open-World Indie Game - Arcade. T-minus a week and a half! 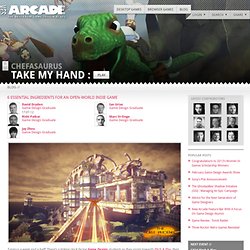 There’s a ticking clock facing Game Design students as they sprint towards Pitch & Play, their industry showcase night. Red Dead Redemption And The Hunt for the Perfect Open World. I'm sorry you had that experience with RDR.The RDR I played was about a father that would do anything to get back the family that was taken from him. 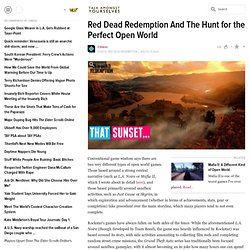 I know it' not much different than what you played but the family aspect is what really resonated with me and kept me invested. Or I just like saving the princess, who knows. "if the dialogue bits weren't so hard to solve at times. "Wasn't that the whole point of the game? I felt that LA Noire was a was a point and clicky game where you could skip fight scenes and driving by telling your partner to drive as if the game was telling you "lets skip to the good part". The dialogue bits were great when they worked right. I think it's completely the opposite. Most great games don't have good plots, but (much like Mass Effect 2 or Uncharted) succeed because of the characters, and the journey they take you on.

And then there's the FBI chap. RDR's characters make its story for me. I don't see how that makes it any different than GTA. Exploring Open World Design Beyond Sandbox Games. Since Grand Theft Auto 3 came on to the scene over a decade ago, game makers have been trying to outdo each other with coming up with open worlds to explore. 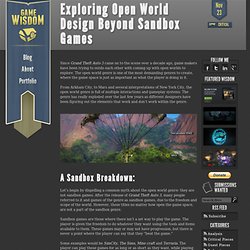 The open world genre is one of the most demanding genres to create, where the game space is just as important as what the player is doing in it. From Arkham City, to Mars and several interpretations of New York City, the open world genre is full of multiple interactions and gameplay systems. Open-world mission design is awful, let's fix it.

[Editor's Note: We're not just a (rad) news site -- we also publish opinions/editorials from our community & employees like this one, though be aware that it may not jive with the opinions of Destructoid as a whole, or how our moms raised us. 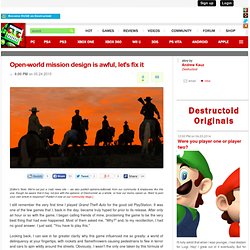 Want to post your own article in response? Publish it now on our community blogs.] I still remember the very first time I played Grand Theft Auto for the good old PlayStation. It was one of the few games that I, back in the day, became truly hyped for prior to its release. After only an hour or so with the game, I began calling friends of mine, proclaiming the game to be the very best thing that had ever happened. Looking back, I can see in far greater clarity why this game influenced me so greatly: a world of delinquency at your fingertips, with rockets and flamethrowers causing pedestrians to flee in terror and cars to spin wildly around the streets. The Building Blocks of Sandbox and Open World Games: Eve, GTA, Minecraft, and Beyond.

The term "sandbox" has become a bit of an overused buzzword over the past few years, with many games using it to attract attention. 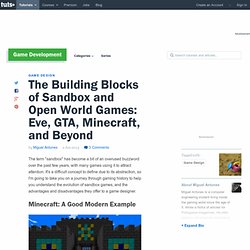 It's a difficult concept to define due to its abstraction, so I'm going to take you on a journey through gaming history to help you understand the evolution of sandbox games, and the advantages and disadvantages they offer to a game designer. Minecraft: A Good Modern Example A picture of a castle made by a player, Luís Prado, in Minecraft. Open world gamasutra - C utare Google. Features - Game Design Essentials: 20 Open World Games. Game Design Essentials: 20 Open World Games By John Harris [The second in Gamasutra's 'Game Design Essentials' series, following ' 20 Difficult Games ', looks at the roots and design lessons of 'open world games' - titles in which the player "is left to his own devices to explore a large world" - from Adventure through Metroid to Grand Theft Auto.]

When we discuss "open world games" in this article, or sometimes "exploration games," we mean those games where generally the player is left to his own devices to explore a large world. What all of these games share is the seeking of new, interesting regions at whatever time the player deems fit. No force forces the player's motion into new areas. A couple of games, such as Air Fortress , push this by offering many mazes, but they are more like many individual games than one large map.