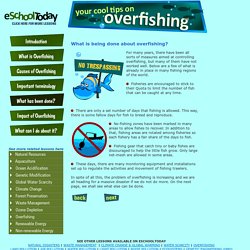 For many years, there have been all sorts of measures aimed at controlling overfishing, but many of them have not worked well. Below are a few of what is already in place in many fishing regions of the world. Fisheries are encouraged to stick to their Quota to limit the number of fish that can be caught at any time. There are only a set number of days that fishing is allowed. This way, there is some fallow days for fish to breed and reproduce. No-fishing zones have been marked in many areas to allow fishes to recover. Fishing gear that catch tiny or baby fishes are discouraged to help the little fish grow. These days, there are many monitoring equipment and installations set up to regulate the activities and movement of fishing trawlers. In spite of all this, the problem of overfishing is increasing and we are all heading for a massive disaster if we do not do more.

Overfishing Documentary. Overfishing is really bad to the sea. Overfishing that's a lot of fish. When Overfishing started and Overfishing. Nasty Sewage! Overfishing in the sea. European Parliament supports major fishery reform. Email Overfishing is a dramatic problem in most areas of the oceans, and many people are desperately trying to protect what’s left of the ecosystems; thankfully though, the European Union has approved a major reform by an enormous majority. 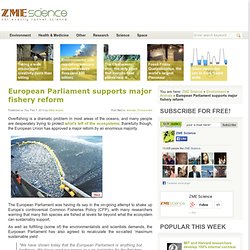 The European Parliament was having its say in the on-going attempt to shake up Europe’s controversial Common Fisheries Policy (CFP), with many researchers warning that many fish species are fished at levels far beyond what the ecosystem can sustainably support. As well as fulfilling (some of) the environmentalists and scientists demands, the Eurpoean Parliament has also agreed to recalculate the so-called ‘maximum sustainable yield’. “We have shown today that the European Parliament is anything but toothless. We have used our power as a co-legislator, for the first time in fisheries policy, to put a stop to overfishing. Campaign groups have been celebrating this decision, but this is just the first step in a larger scale issue. Overfishing. Ocean overfishing is simply the taking of wildlife from the sea at rates too high for fished species to replace themselves.

The earliest overfishing occurred in the early 1800s when humans, seeking blubber for lamp oil, decimated the whale population. Some fish that we eat, including Atlantic cod and herring and California's sardines, were also harvested to the brink of extinction by the mid-1900s. Highly disruptive to the food chain, these isolated, regional depletions became global and catastrophic by the late 20th century. When It Started Marine scientists know when widespread overfishing of the seas began. In the mid-20th century, international efforts to increase the availability and affordability of protein-rich foods led to concerted government efforts to increase fishing capacity. Big fish problems. Over fishing cartoon. Overfishing Dangerously Depleting Ocean Life. 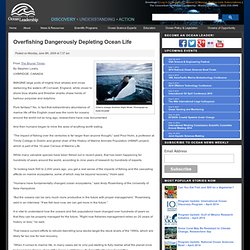 Pure fantasy? No, in fact that extraordinary abundance of marine life off the English coast was the norm for oceans around the world not so long ago, researchers have now documented. And then humans began to mine the seas of anything worth eating. “The impact of fishing over the centuries is far larger than anyone thought,” said Poul Holm, a professor at Trinity College in Dublin and global chair of the History of Marine Animals Population (HMAP) project, which is part of the 10-year Census of Marine Life. 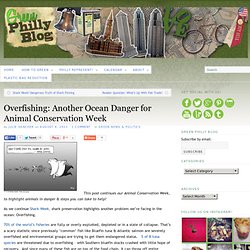 As we continue Shark Week, shark preservation highlights another problem we’re facing in the ocean: Overfishing. 70% of the world’s fisheries are fully or overly exploited, depleted or in a state of collapse. That’s a scary statistic since previously ‘common’ fish like Bluefin tuna & Atlantic salmon are severely overfished and environmental groups are trying to get them endangered status. 5 of 8 tuna species are threatened due to overfishing – with Southern bluefin stocks crashed with little hope of recovery.

And since many of these fish are on top of the food chain, it can throw off entire ecosystems… including a further danger for whales, dolphins and sharks. Up to 90% of large, open-water fish have been depleted over the last 50 years. Unfortunately farmed fish appear to have some health risks as well. The fish has a lot of mercury that u dont want to eat. Shark fin soup. OUR OCEANS NEED US. Over fishing.