What makes a nonprofit news org legit? Three other questions to. Last week, Jim Barnett raised a question about nonprofit journalism: What makes it legit? 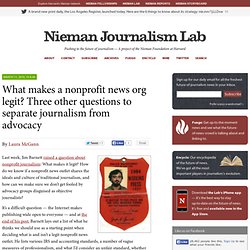 How do we know if a nonprofit news outlet shares the ideals and culture of traditional journalism, and how can we make sure we don’t get fooled by advocacy groups disguised as objective journalists? It’s a difficult question — the Internet makes publishing wide open to everyone — and at the end of his post, Barnett lays out a list of what he thinks we should use as a starting point when deciding what is and isn’t a legit nonprofit news outlet.

He lists various IRS and accounting standards, a number of vague measures of professionalism, and what I’d consider an unfair standard, whether an organization is credentialed by federal or state government. This is one place where Barnett and I disagree. Before coming to the Lab, I used to edit a nonprofit news site, The Washington Independent, where for two years I dealt with the reality of who gets considered “legit.” 1. 2. 3. Bay Area News Project has high hopes, few employees - latimes.co. Philanthropist Warren Hellman is backing Bay Area News Project with $5… (Los Angeles Times ) From San Francisco — A wealthy philanthropist has kicked in $5 million in seed money. 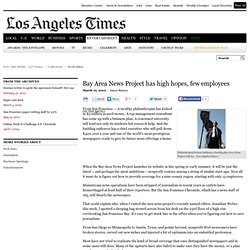 A top management consultant has come up with a business plan. A renowned university will lend not only its students but research help. And the budding endeavor has a chief executive who will pull down $400,000 a year and one of the world's most prestigious newspapers ready to give its future news offerings a home. When the Bay Area News Project launches its website in late spring or early summer, it will be just the latest -- and perhaps the most ambitious -- nonprofit venture among a string of similar start-ups. Mainstream news operations have been stripped of journalism in recent years as outlets have hemorrhaged at least half of their reporters. Most have not tried to replicate the kind of broad coverage that once distinguished newspapers and in some cases still does. Chronicle rival "Money is like manure. A New News Organization’s Emerging Leadership - Bay Area Blog - Jonathan Weber. The Bay Area News Project, that grand alliance of old money and young blood, will soon make its debut. 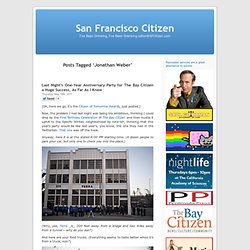 Savor two bits of news released just now: 1. “The Bay Area News Project appoints Lisa Frazier as C.E.O and Jonathan Weber as Editor-In-Chief“ (but maybe you already knew about that, of course), und; 2. “The Bay Area News Project to supply news content for Bay Area sections of The New York Times“ O.K. then. [UPDATE: The SFWeekly's young Joe Eskenazi just grilled the principals of the BANP just now - his report.] So the new CEO will be Lisa Frazier, the very same woman who was in charge of the hunt for a CEO? 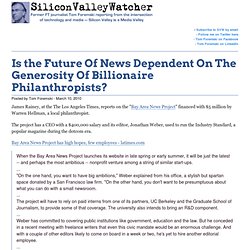 The project has a CEO with a $400,000 salary and its editor, Jonathan Weber, used to run the Industry Standard, a popular magazine during the dotcom era. Bay Area News Project has high hopes, few employees - latimes.com When the Bay Area News Project launches its website in late spring or early summer, it will be just the latest -- and perhaps the most ambitious -- nonprofit venture among a string of similar start-ups. ...

"On the one hand, you want to have big ambitions," Weber explained from his office, a stylish but spartan space donated by a San Francisco law firm. Foremski's Take: The great thing about emerging new media business models, is if one media organization figures it out - we all figure it out - we can all adapt and adopt a similar model. . - The salaries and the organization. A new convert to nonprofit journalism out west? » Nieman Journal. The Bay Area News Project // Home.