The choices we make

My brain made me do it: will neuroscience change the way we punish criminals? Australian law may be on the cusp of a brain-based revolution that will reshape the way we deal with criminals. 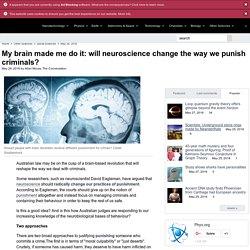 Some researchers, such as neuroscientist David Eagleman, have argued that neuroscience should radically change our practices of punishment. According to Eagleman, the courts should give up on the notion of punishment altogether and instead focus on managing criminals and containing their behaviour in order to keep the rest of us safe. Is this a good idea? And is this how Australian judges are responding to our increasing knowledge of the neurobiological bases of behaviour? Two approaches There are two broad approaches to justifying punishing someone who commits a crime.The first is in terms of "moral culpability" or "just deserts".

This is known as the "retributive" view; retributivists aim to mete out just deserts, or "just punishment". Could a Neural Implant Correct Errant Thoughts? Most people make good decisions most of the time. 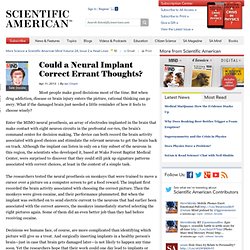 But when drug addiction, disease or brain injury enters the picture, rational thinking can go awry. What if the damaged brain just needed a little reminder of how it feels to choose wisely? Enter the MIMO neural prosthesis, an array of electrodes implanted in the brain that make contact with eight neuron circuits in the prefrontal cor-tex, the brain's command center for decision making. The device can both record the brain activity associated with good choices and stimulate the relevant neurons to get the brain back on track. Although the implant can listen in only on a tiny subset of the neurons in this region, the scientists who developed it, based at Wake Forest Baptist Medical Center, were surprised to discover that they could still pick up signature patterns associated with correct choices, at least in the context of a simple task. Why living in the moment is impossible: Decision-making memories stored in mysterious brain area known to be involved with vision.

Brain Scans of Hoarders Reveal Why They Never De-Clutter. Image courtesy of iStockphoto/AbackPhotography Jill, a 60-year-old woman in Milwaukee, has overcome extreme poverty. 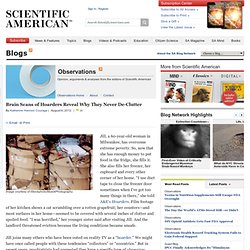 So, now that she has enough money to put food in the fridge, she fills it. She also fills her freezer, her cupboard and every other corner of her home. “I use duct tape to close the freezer door sometimes when I’ve got too many things in there,” she told A&E’s Hoarders. Film footage of her kitchen shows a cat scrambling over a rotten grapefruit; her counters—and most surfaces in her home—seemed to be covered with several inches of clutter and spoiled food.

Jill joins many others who have been outed on reality TV as a “hoarder.” Hoarding disorder is categorized as “the excessive acquisition of and inability to discard objects, resulting in debilitating clutter,” wrote the researchers behind the new study, led by Yale University School of Medicine’s David Tolin. Some people hoard particular types of things, such as newspapers, craft supplies or clothing. Brain might not stand in the way of free will - life - 06 August 2012. Editorial: "Can we live without free will? 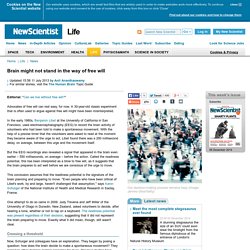 " Advocates of free will can rest easy, for now. A 30-year-old classic experiment that is often used to argue against free will might have been misinterpreted. In the early 1980s, Benjamin Libet at the University of California in San Francisco, used electroencephalography (EEG) to record the brain activity of volunteers who had been told to make a spontaneous movement. With the help of a precise timer that the volunteers were asked to read at the moment they became aware of the urge to act, Libet found there was a 200 millisecond delay, on average, between this urge and the movement itself. But the EEG recordings also revealed a signal that appeared in the brain even earlier – 550 milliseconds, on average – before the action. This conclusion assumes that the readiness potential is the signature of the brain planning and preparing to move.

One attempt to do so came in 2009. Crossing a threshold Now, Schurger and colleagues have an explanation. The Neuroscience Of Effort. Differences in dopamine may determine how hard people work. Free Will (And Why You Still Don't Have It) Why We Often Chicken Out at the Last Minute.