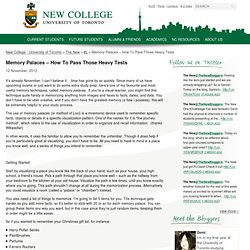 The use of memory palaces (or method of Loci) is a mnemonic device used to remember specific facts, objects or details in a specific visualization pattern. In other words, it uses the familiar to allow you to remember the unfamiliar. Getting Started: Start by visualizing a place you know like the back of your hand, such as your house, your high school, a friend’s house. I’m ok, you’re not ok. The right supramarginal gyrus plays an important role in empathy October 09, 2013 Egoism and narcissism appear to be on the rise in our society, while empathy is on the decline. 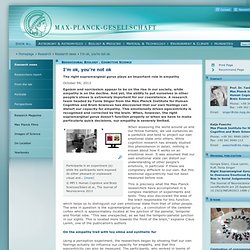 Mind-Control Parasite Kills Mice's Fear of Cats Permanently. A fair amount of research has taken place on Toxoplasma gondii, the bizarre parasite that makes mice unafraid of cats, and the latest chapter is a strange one. 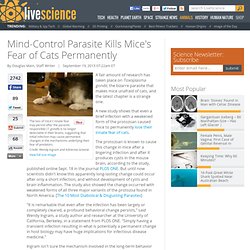 A new study shows that even a brief infection with a weakened form of the protozoan caused mice to permanently lose their innate fear of cats. The protozoan is known to cause this change in mice after a lingering infection and after it produces cysts in the mouse brain, according to the study, published online Sept. 18 in the journal PLOS ONE. But until now scientists didn't know this apparently long-lasting change could occur after only a short infection, and without development of cysts and brain inflammation.

The study also showed the change occurred with weakened forms of all three major variants of the protozoa found in North America. [The 10 Most Diabolical & Disgusting Parasites] Drugs of Abuse. Consciousness. Neuroscientists plant false memories in the brain. The phenomenon of false memory has been well-documented: In many court cases, defendants have been found guilty based on testimony from witnesses and victims who were sure of their recollections, but DNA evidence later overturned the conviction. 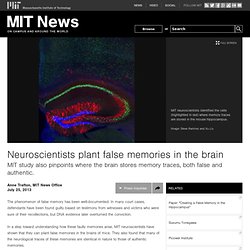 In a step toward understanding how these faulty memories arise, MIT neuroscientists have shown that they can plant false memories in the brains of mice. Neuroscientists pinpoint location of fear memory in amygdala. A rustle of undergrowth in the outback: it’s a sound that might make an animal or person stop sharply and be still, in the anticipation of a predator. 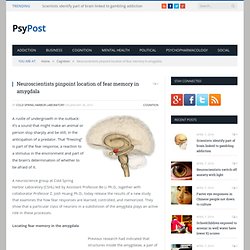 That “freezing” is part of the fear response, a reaction to a stimulus in the environment and part of the brain’s determination of whether to be afraid of it. A neuroscience group at Cold Spring Harbor Laboratory (CSHL) led by Assistant Professor Bo Li Ph.D., together with collaborator Professor Z. Josh Huang Ph.D., today release the results of a new study that examines the how fear responses are learned, controlled, and memorized. Etymology of Neuroscience Terms. Sense of Space/time.

Direct and indirect cellular effects of aspa... [Eur J Clin Nutr. 2008. Neurological disorder MMF found to be caused by vaccines: scientific proof. (NaturalNews) It is a little-known condition that can trigger persistent and debilitating symptoms similar to those associated with multiple sclerosis (MS) and fibromyalgia, but is also one that the medical profession at large is still unwilling to acknowledge. And yet emerging research continues to show that macrophagic myofasciitis, or MMF, is a very real condition brought about as a direct result of vaccines that contain aluminum adjuvants, which become lodged in muscle tissue and lead to severe neurological damage and other problems.

First identified in 1998, MMF is characterized by debilitating muscle and joint pain, chronic inflammation, and incapacitating fatigue. Though clearly distinct from both fibromyalgia and MS, which are also now believed by many to be neurological conditions triggered by vaccines, MMF is similar in that it appears to involve the demyelination of the central nervous system, or the loss of the fatty layer myelin sheaths that protect nerves. All about brain.