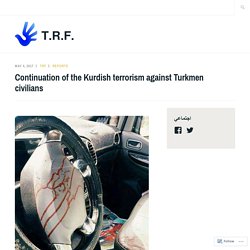 Previously the dispute was about legality, while currently turned to bloody and fatal. Few days after the kidnapping and torturing a Turkmen citizen “Ali Muhammad Ali” in Kerkuk, who was found after few days thrown on the road at one of Kerkuk’s suburb. The video, which was distributed, showed that the kidnappers are Kurds. On Wednesday May 3, 2017, at 3:00 PM. A Starex car transporting Turkmen university girls from Kerkuk University to their home at Tuz Khormato, a city located within Salahadin Governorate.

It is clear from the photographs which was distributed after the incident at the social media, that this incident was intentional because there is no legal or security reason to target a civil car transporting students specially the drivers are well know to the checkpoint because they are frequent drivers through these check point. Human Rights Office. Turkmen MPs collect signatures to dismiss Kirkuk governor, disband provincial council. Kirkuk (IraqiNews.com) Turkmen members of the Iraqi parliament have collected signatures from more than 200 MPs who represent several political factions on a petition to demand dismissal of Kirkuk governor Najmuddin Karim and the dissolution of its provincial council, according to MP Niazi Oghlo. 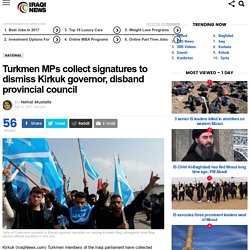 Oghlo said the move came after the council’s decision to raise the Kurdish flag above official buildings in the province and its plans to run a referendum on joining Kurdistan Region. “Turkmen MPs collected more than 200 signatures from several political groups’ representatives to dismiss Kirkuk governor and disband its provincial council,” Oghlo stated on Wednesday. “The signatures will be attached to a request that will be submitted to parliament next week when sessions resume.” Dr. Ali Akram to TRT: The Kurds changed the demography of Kirkuk by bringing 600 thousands Kurds and inhabiting them in Kirkuk. TNAnews-Baghdad| TRT world TV had an interview with Dr. 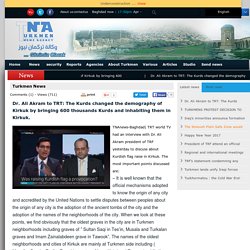 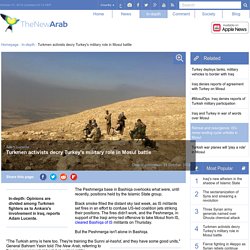 The Peshmerga base in Bashiqa overlooks what were, until recently, positions held by the Islamic State group. Black smoke filled the distant sky last week, as IS militants set fires in an effort to confuse US-led coalition jets striking their positions. Statements - www.turkmenrescue.com. Photo by local activist showing the bulding of Hussainia in Dawuq how it is destroyed by the attack Ref. : 192 Date: 23 December 2016. 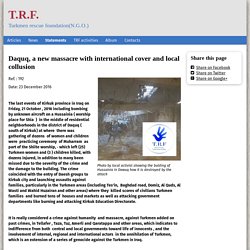 Statment. Ref: 186 Date: 11 September 2016 After deceleration of Genocide statement by department of state at March 2016, we have been waiting a real serious steps from US institutions, but after reading US house of representatives’ resolution about Nineveh plain province we really got upset. 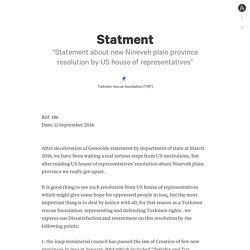 Iraqi Turkmen: the minority group you probably never heard of. Kirkuk, Iraq is home to much of the country's Turkmen population (Al Bawaba/Adam Lucente) Like much of the Middle East, Iraq was once part of the Ottoman Empire. 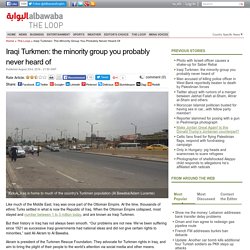 At the time, thousands of ethnic Turks settled in what is now the Republic of Iraq. When the Ottoman Empire collapsed, most stayed and number between 1 to 3 million today, and are known as Iraqi Turkmen. But their history in Iraq has not always been smooth. “Our problems are not new. Iraq multietnico: i Turkmeni e gli altri dopo la cacciata dell’Isis da Mosul. Mcc43 I Curdi iracheni combattendo l’Isis hanno ottenuto aree che prima erano sotto il governo iracheno, ampliando il semiautonomo Kurdistan quasi del 50 per cento. 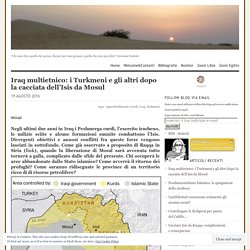 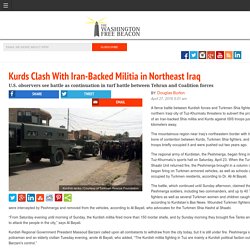 The mountainous region near Iraq’s northeastern border with Iran has been a bone of contention between Kurds, Turkmen Shia fighters, and ISIS since jihadi troops briefly occupied it and were pushed out two years ago. The regional army of Kurdistan, the Peshmerga, began firing into Tuz-Khurmatu’s sports hall on Saturday, April 23. When the Turkmen Hashd al Shaabi Unit returned fire, the Peshmerga brought in a column of five tanks and began firing on Turkmen armored vehicles, as well as schools and residences occupied by Turkmen residents, according to Dr. Turkmen Town Under Attack.

UNPO| While the Kurdish Peshmerga’s launch of an offensive to take Sinjar from ISIS is hitting the news, local sources report that on Thursday [12 November 2015], the Peshmerga attacked a group of Turkmen security forces near the Turkmen town of Tuzkhurmatu, approximately 180km north of Baghdad. 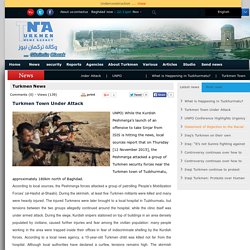 According to local sources, the Peshmerga forces attacked a group of patrolling ‘People’s Mobilization Forces’ (al-Hashd al-Shaabi). During the skirmish, at least five Turkmen militants were killed and many were heavily injured. The injured Turkmens were later brought to a local hospital in Tuzkhurmatu, but tensions between the two groups allegedly continued around the hospital, while the clinic itself was under armed attack. Tuzkhurmatu is a Turkmen town on which both Iraqi and Kurdish authorities have conflicting claims. Since the town was taken back from ISIS in 2014, security has been provided by both Peshmerga and Shia militia forces. The Plight of Iraqi Turkmen Book 1 CM SON 12 ocak.

Iraq: “It’s not Sunnis fighting against Shias, it’s terrorists fighting against the government” Mohammed Mahdi Ameen al-Bayati, of the Turkmen Community in Iraq, was the Iraqi Minister for Human Rights from the 9th of September, 2014 until the 16th of August, 2015. In an Interview with Eurasia News, he spoke about the situation of the Turkmens, and their future prospects in the country. Mister al-Bayati, do you think that the State of Iraq and Syria will even exist in ten years from now?