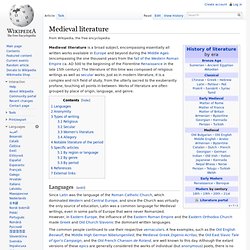 AD 500 to the beginning of the Florentine Renaissance in the late 15th century). The literature of this time was composed of religious writings as well as secular works. Just as in modern literature, it is a complex and rich field of study, from the utterly sacred to the exuberantly profane, touching all points in-between. Le Roman de la Rose (French) Matter of Britain. The Matter of Britain is a name given collectively to the body of medieval literature and legendary material associated with Great Britain, and sometimes Brittany, and the legendary kings and heroes associated with it, particularly King Arthur. 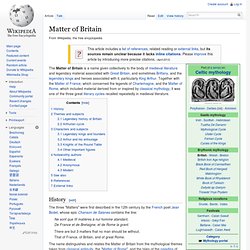 Together with the Matter of France, which concerned the legends of Charlemagne, and the Matter of Rome, which included material derived from or inspired by classical mythology, it was one of the three great literary cycles recalled repeatedly in medieval literature. History[edit] The three "Matters" were first described in the 12th century by the French poet Jean Bodel, whose epic Chanson de Saisnes contains the line: Ne sont que III matières à nul homme atandant, De France et de Bretaigne, et de Rome la grant.

There are but 3 matters that no man should be without, Lanzelet. Abbildungen zu Chrétien de Troyes' Lancelot (Pierpont Morgan Library, um 1300) Die Inhaltsangabe orientiert sich an Spiewoks Einteilung in seiner Lanzelet-Ausgabe. 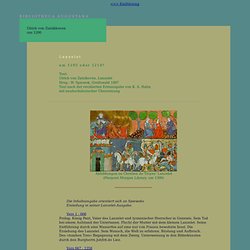 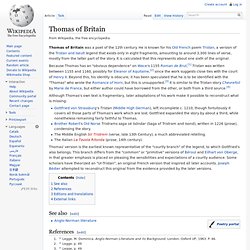 He is known for his Old French poem Tristan, a version of the Tristan and Iseult legend that exists only in eight fragments, amounting to around 3,300 lines of verse, mostly from the latter part of the story. It is calculated that this represents about one sixth of the original. Because Thomas has an "obvious dependence" on Wace's 1155 Roman de Brut,[1] Tristan was written between 1155 and 1160, possibly for Eleanor of Aquitaine,[2] since the work suggests close ties with the court of Henry II.

Beyond this, his identity is obscure; it has been speculated that he is to be identified with the "Thomas" who wrote the Romance of Horn, but this is unsupported.[3] It is similar to the Tristan-story Chevrefoil by Marie de France, but either author could have borrowed from the other, or both from a third source.[4] Although Thomas's own text is fragmentary, later adaptations of his work make it possible to reconstruct what is missing: Tristan (Thomas d’Angleterre) The Romance of Tristan and Iseult. Historia Regum Britanniae.

Although credited uncritically well into the 16th century,[1] since the 17th century it has been credited with little value as history – when events described, such as Julius Caesar's invasions of Britain, can be corroborated from contemporary histories, Geoffrey's account can be seen to be wildly inaccurate – but it remains a valuable piece of medieval literature, which contains the earliest known version of the story of King Lear and his three daughters, and introduced non-Welsh-speakers to the legend of King Arthur. 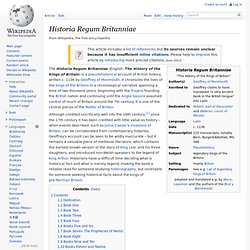 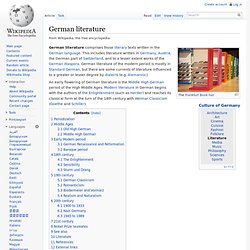 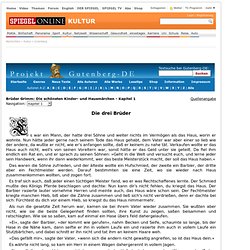 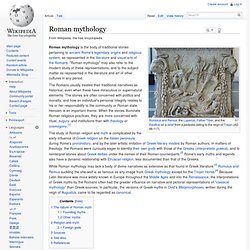 "Roman mythology" may also refer to the modern study of these representations, and to the subject matter as represented in the literature and art of other cultures in any period. The Romans usually treated their traditional narratives as historical, even when these have miraculous or supernatural elements. The stories are often concerned with politics and morality, and how an individual's personal integrity relates to his or her responsibility to the community or Roman state. Heroism is an important theme. When the stories illuminate Roman religious practices, they are more concerned with ritual, augury, and institutions than with theology or cosmogony.[1] Virgil. Virgil is traditionally ranked as one of Rome's greatest poets. 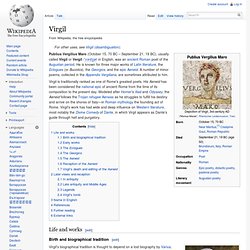 His Aeneid has been considered the national epic of ancient Rome from the time of its composition to the present day. Modeled after Homer's Iliad and Odyssey, the Aeneid follows the Trojan refugee Aeneas as he struggles to fulfill his destiny and arrive on the shores of Italy—in Roman mythology the founding act of Rome. Virgil's work has had wide and deep influence on Western literature, most notably the Divine Comedy of Dante, in which Virgil appears as Dante's guide through hell and purgatory. The Aeneid by Virgil. Ovid. Ovid is traditionally ranked alongside Virgil and Horace, his older contemporaries, as one of the three canonic poets of Latin literature. 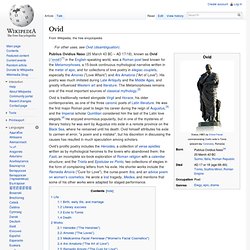 He was the first major Roman poet to begin his career during the reign of Augustus,[3] and the Imperial scholar Quintilian considered him the last of the Latin love elegists.[4] He enjoyed enormous popularity, but in one of the mysteries of literary history he was sent by Augustus into exile in a remote province on the Black Sea, where he remained until his death. Ovid himself attributes his exile to carmen et error, "a poem and a mistake", but his discretion in discussing the causes has resulted in much speculation among scholars.

Life[edit] Ovid talks more about his own life than most other Roman poets. Information about his biography is drawn primarily from his poetry, especially Tristia 4.10, which gives a long autobiographical account of his life. Metamorphoses by Ovid. Livy. Life[edit] Titus Livius probably went to Rome in the 30s BC, and it is likely that he spent a large amount of time in the city after this, although it may not have been his primary home. During his time in Rome, he was never a senator nor held any other governmental position. His elementary mistakes in military matters show that he was never a soldier. However, he was educated in philosophy and rhetoric. It seems that Livy had the financial resources and means to live an independent life. Livy was known to give recitations to small audiences, but he was not heard of to engage in declamation, which was a common pastime. Perhaps Livy’s most famous work was his history of Rome.

Greek mythology. Greek mythology is explicitly embodied in a large collection of narratives, and implicitly in Greek representational arts, such as vase-paintings and votive gifts. Greek myth attempts to explain the origins of the world, and details the lives and adventures of a wide variety of gods, goddesses, heroes, heroines, and mythological creatures. These accounts initially were disseminated in an oral-poetic tradition; today the Greek myths are known primarily from Greek literature.

Archaeological findings provide a principal source of detail about Greek mythology, with gods and heroes featured prominently in the decoration of many artifacts. Geometric designs on pottery of the eighth century BC depict scenes from the Trojan cycle as well as the adventures of Heracles. Sources Literary sources. Herodotus. Place in history[edit] Herodotus announced the size and scope of his work at the beginning of his Researches or Histories: Ἡροδότου Ἁλικαρνησσέος ἱστορίης ἀπόδεξις ἥδε, ὡς μήτε τὰ γενόμενα ἐξ ἀνθρώπων τῷ χρόνῳ ἐξίτηλα γένηται, μήτε ἔργα μεγάλα τε καὶ θωμαστά, τὰ μὲν Ἕλλησι, τὰ δὲ βαρβάροισι ἀποδεχθέντα, ἀκλεᾶ γένηται, τὰ τε ἄλλα καὶ δι' ἣν αἰτίην ἐπολέμησαν ἀλλήλοισι.[2] Herodotus of Halicarnassus, his Researches are here set down to preserve the memory of the past by putting on record the astonishing achievements of both the Greeks and the Barbarians; and more particularly, to show how they came into conflict.[3] His record of the achievements of others was an achievement in itself, though the extent of it has been debated.

His place in history and his significance may be understood according to the traditions within which he worked. His work is the earliest Greek prose to have survived intact. Homer was another inspirational source.[16] Robert Graves.