Anann. In Irish mythology, Anann (Anu, Ana, Anand) was a goddess. 'Anann' is identified as the personal name of the Morrígan in many MSS of Lebor Gabála Érenn. 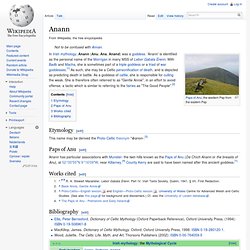 With Badb and Macha, she is sometimes part of a triple goddess or a triad of war goddesses.[1] As such, she may be a Celtic personification of death, and is depicted as predicting death in battle. As a goddess of cattle, she is responsible for culling the weak. She is therefore often referred to as "Gentle Annie", in an effort to avoid offense, a tactic which is similar to referring to the fairies as "The Good People".[2] Etymology[edit] This name may be derived the Proto-Celtic theonym *Φanon-.[3] Paps of Anu[edit] Anann has particular associations with Munster: the twin hills known as the Paps of Anu (Dá Chích Anann or the breasts of Anu), at WikiMiniAtlas 52°00′55″N 9°16′09″W﻿ / ﻿52.01528°N 9.26917°W﻿ / 52.01528; -9.26917, near Killarney,[4]County Kerry are said to have been named after this ancient goddess.[1] Works cited[edit]

Asherah. Astarte. Astarte riding in a chariot with four branches protruding from roof, on the reverse of a Julia Maesa coin from Sidon Astarte /æˈstɑrti/ (Ancient Greek: Ἀστάρτη, "Astártē") is the Greek name of the Mesopotamian (i.e. 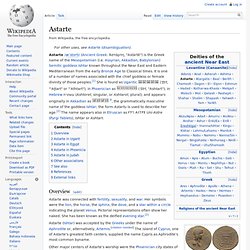 Assyrian, Akkadian, Babylonian) Semitic goddess Ishtar known throughout the Near East and Eastern Mediterranean from the early Bronze Age to Classical times. Cybele. Cybele (/ˈsɪbɨliː/; Phrygian: Matar Kubileya/Kubeleya "Kubeleyan Mother", perhaps "Mountain Mother"; Turkish Kibele; Lydian Kuvava; Greek: Κυβέλη Kybele, Κυβήβη Kybebe, Κύβελις Kybelis) was an originally Anatolian mother goddess; she has a possible precursor in the earliest neolithic at Çatalhöyük (in the Konya region) where the statue of a pregnant goddess seated on a lion throne was found in a granary. 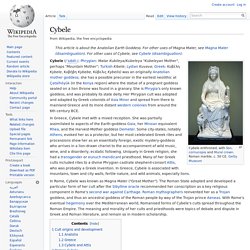 She is Phrygia's only known goddess, and was probably its state deity. Her Phrygian cult was adopted and adapted by Greek colonists of Asia Minor and spread from there to mainland Greece and its more distant western colonies from around the 6th century BCE. In Rome, Cybele was known as Magna Mater ("Great Mother"). The Roman State adopted and developed a particular form of her cult after the Sibylline oracle recommended her conscription as a key religious component in Rome's second war against Carthage. Danu (Irish goddess) In Irish mythology, Danu ([ˈdanu]; modern Irish Dana [ˈd̪ˠanˠə]) is the mother goddess of the Tuatha Dé Danann (Old Irish: "The peoples of the goddess Danu"). 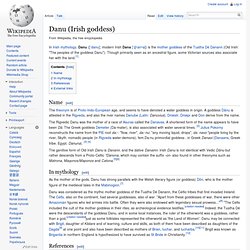 Though primarily seen as an ancestral figure, some Victorian sources also associate her with the land.[1] The genitive form of Old Irish Danu is Danann, and the dative Danainn. Irish Danu is not identical with Vedic Dānu but rather descends from a Proto-Celtic *Danona, which may contain the suffix -on- also found in other theonyms such as Matrona, Maqonos/Maponos and Catona.[5][6] As the mother of the gods, Danu has strong parallels with the Welsh literary figure (or goddess) Dôn, who is the mother figure of the medieval tales in the Mabinogion.[7] Jump up ^ Squire, Charles Celtic Myth and Legend, p. 34: "Danu herself probably represented the earth and its fruitfulness, and one might compare her with the Greek Demeter.

Dea Matrona. Stone carving of the goddess Matrona In Celtic mythology, Dea Matrona ("divine mother goddess") was the goddess who gives her name to the river Marne (ancient Matrŏna[1]) in Gaul. 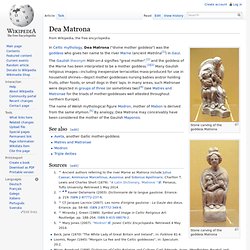 The Gaulish theonym Mātr-on-ā signifies "great mother",[2] and the goddess of the Marne has been interpreted to be a mother goddess.[3][2] Many Gaulish religious images—including inexpensive terracottas mass-produced for use in household shrines—depict mother goddesses nursing babies and/or holding fruits, other foods, or small dogs in their laps. Demeter. In ancient Greek religion and myth, Demeter (/diˈmiːtər/; Attic: Δημήτηρ Dēmḗtēr; Doric: Δαμάτηρ Dāmā́tēr) is the goddess of the harvest, who presided over grains and the fertility of the earth. 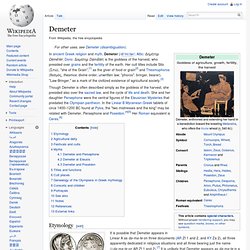 Her cult titles include Sito (Σιτώ), "she of the Grain",[1] as the giver of food or grain[2] and Thesmophoros (θεσμός, thesmos: divine order, unwritten law; "phoros": bringer, bearer), "Law-Bringer," as a mark of the civilized existence of agricultural society.[3] Etymology[edit] Demeter's character as mother-goddess is identified in the second element of her name meter (μήτηρ) derived from Proto-Indo-European *méh₂tēr (mother).[11] In antiquity, different explanations were already proffered for the first element of her name. An alternative, Proto-Indo-European etymology comes through Potnia and Despoina; where Des- represents a derivative of PIE *dem (house, dome), and Demeter is "mother of the house" (from PIE *dems-méh₂tēr).[20] Agricultural deity[edit] 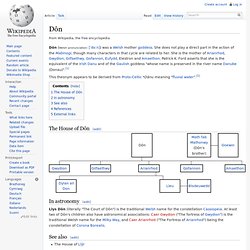 Durga. Goddess Durga (Hindustani pronunciation: [ˈd̪uːrɡaː]; Sanskrit: दुर्गा), meaning "the inaccessible"[1] or "the invincible"; durga) is the most popular incarnation of Devi and one of the main forms of the Goddess Shakti in the Hindu pantheon. 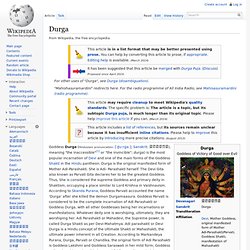 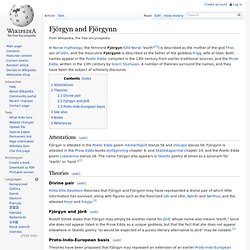 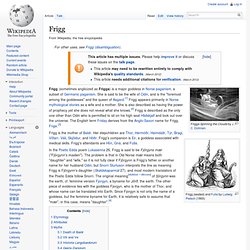 The problem is that in Old Norse mær means both "daughter" and "wife," so it is not fully clear if Fjörgynn is Frigg's father or another name for her husband Odin, but Snorri Sturluson interprets the line as meaning Frigg is Fjörgynn's daughter (Skáldskaparmál 27), and most modern translators of the Poetic Edda follow Snorri.

The original meaning[dubious ] of fjörgynn was the earth, cf. feminine version Fjorgyn, a byname for Jörð, the earth. The other piece of evidence lies with the goddess Fjorgyn, who is the mother of Thor, and whose name can be translated into Earth. Since Fjorgyn is not only the name of a goddess, but the feminine byname for Earth, it is relatively safe to assume that "mær", in this case, means "daughter".[4] Gaia (mythology) The Greek word γαῖα (transliterated as gaia) is a collateral form of γῆ[4] (gē, Doric γᾶ ga and probably δᾶ da)[5] meaning Earth,[6] a word of uncertain origin.[7] R. S. P. Beekes has suggested a Pre-Greek origin.[8] In Mycenean Greek Ma-ka (trans. as Ma-ga, "Mother Gaia") also contains the root ga-.[9][10] According to Hesiod, Gaia conceived further offspring with Uranus, first the giant one-eyed Cyclopes: Brontes ("Thunder"), Steropes ("Lightning") and Arges ("Bright");[16] then the Hecatonchires: Cottus, Briareos and Gyges, each with a hundred arms and fifty heads.[17] As each of the Cyclopes and Hecatonchires were born, Uranus hid them in a secret place within Gaia, causing her great pain.

Because Cronus had learned from Gaia and Uranus, that he was destined to be overthrown by his own child, Cronus swallowed each of the children born to him by his Titan sister Rhea. Gayatri. Illustration by Raja Ravi Verma. In illustrations, the goddess often sits on a lotus flower and appears with five heads and five pairs of hands, representing the incarnations of the goddess as Parvati, Saraswati etc. She is Saraswatī. She is the consort of Brahma Gayatri (Sanskrit: गायत्री, gāyatrī) is the feminine form of gāyatra, a Sanskrit word for a song or a hymn, having a Vedic meter of 3 padas or lines of 8 syllables. Geb. Name[edit] The name was pronounced as such from the Greek period onward and was formerly erroneously read as Seb[1] or as Keb. The original Egyptian was perhaps "Gebeb"/"Kebeb".

It was spelled with either initial -g- (all periods), or with -k-point (gj). The latter initial root consonant occurs once in the Middle Kingdom Coffin Texts, more often in 21st Dynasty mythological papyri as well as in a text from the Ptolemaic tomb of Petosiris at Tuna el-Gebel or was written with initial hard -k-, as e.g. in a 30th Dynasty papyrus text in the Brooklyn Museum dealing with descriptions of and remedies against snakes. Hathor. Hathor (/ˈhæθɔr/ or /ˈhæθər/;[2] Egyptian: ḥwt-ḥr and from Greek: Άθωρ, "mansion of Horus")[1] is an Ancient Egyptian goddess who personified the principles of joy, feminine love, and motherhood.[3] She was one of the most important and popular deities throughout the history of Ancient Egypt. Hathor was worshiped by Royalty and common people alike in whose tombs she is depicted as "Mistress of the West" welcoming the dead into the next life.[4] In other roles she was a goddess of music, dance, foreign lands and fertility who helped women in childbirth,[4] as well as the patron goddess of miners.[5] The cult of Hathor predates the historic period, and the roots of devotion to her are therefore difficult to trace, though it may be a development of predynastic cults which venerated fertility, and nature in general, represented by cows.[6] Hathor is commonly depicted as a cow goddess with horns in which is set a sun disk with Uraeus.

Early depictions[edit] Heavenly Mother (Mormonism) Hera. Portrayed as majestic and solemn, often enthroned, and crowned with the polos (a high cylindrical crown worn by several of the Great Goddesses), Hera may bear a pomegranate in her hand, emblem of fertile blood and death and a substitute for the narcotic capsule of the opium poppy.[2] A scholar of Greek mythology Walter Burkert writes in Greek Religion, "Nevertheless, there are memories of an earlier aniconic representation, as a pillar in Argos and as a plank in Samos.

Holda. In German legends, Frau Holda was the protectoress of agriculture and women's crafts. Hlín. Hebat. Jörð. A statue depicting Jörð as a matriarchal figure In Norse mythology, Jörð (Icelandic "earth", pronounced [ˈjœrð] and from Old Norse jǫrð, pronounced [ˈjɔrð], sometimes Anglicized as Jord or Jorth; also called Jarð, [jɑrð] as in Old East Norse), is a female jötunn. Juno (mythology) Juno's own warlike aspect among the Romans is apparent in her attire. She often appeared sitting pictured with a peacock[3] armed and wearing a goatskin cloak. Kubaba. Magna Dea. Mami (goddess) Veneration of Mary in Roman Catholicism. Roman Catholic veneration of Mary, the mother of Jesus, which has grown over time in importance, is manifested not only in prayer but also in the visual arts, poetry and music.[2][3][4][5] Popes have encouraged it, while also taking steps to reform some manifestations of it.

[note 1] The Holy See has insisted on the importance of distinguishing "true from false devotion, and authentic doctrine from its deformations by excess or defect".[6] There are significantly more titles, feasts and venerative Marian practices among Roman Catholics than in other Christian traditions.[7] Marian Movements and Societies with millions of members have arisen from belief in events such as Akita, Fatima and Lourdes and other reasons.[12] Matres and Matronae. Mat Zemlya. Minerva. Mokosh. Mut. Nammu. Nerthus. Ninhursag. Ninsun. Nut (goddess) Pachamama. Phra Mae Thorani. Queen of Heaven. Rhea (mythology) Spider Grandmother. Terra (mythology) Thelema. Theotokos. Toci. Triple Goddess (Neopaganism) Venus figurines. Yer Tanrı.