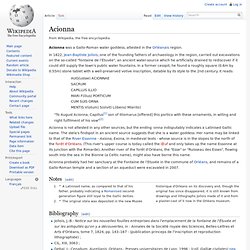 In 1822, Jean-Baptiste Jollois, one of the founding fathers of archaeology in the region, carried out excavations on the so-called "fontaine de l'Étuvée", an ancient water-source which he artificially drained to rediscover if it could still supply the town's public water fountains. In a former cesspit, he found a roughly square (0.6m by 0.55m) stone tablet with a well-preserved votive inscription, datable by its style to the 2nd century. It reads: AUG(ustae) ACIONNAE MARI F(ilius) PORTICUM MENTIS V(otum) S(olvit) L(ibens) M(erito) "To August Acionna, Capillus[1] son of Illiomarus [offered] this portico with these ornaments, in willing and right fulfilment of his vow"[2]

Belisama. In Celtic polytheism, Belisama (epigraphically Bηλησαμα) was a goddess worshipped in Gaul. 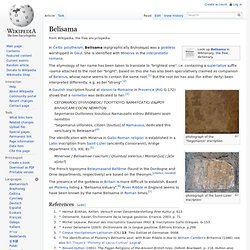 She is identified with Minerva in the interpretatio romana. The etymology of her name has been taken to translate to "brightest one", i.e. containing a superlative suffix -isama attached to the root bel "bright"; based on this she has also been speculatively claimed as companion of Belenus, whose name seems to contain the same root.[1] But the root bel has also (for either deity) been interpreted differently, e.g. as bel "strong".[2] Boann. As told in the Dindsenchas,[3] Boann created the Boyne. 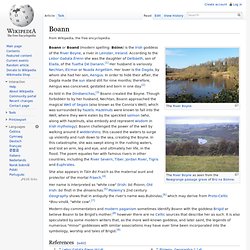 Though forbidden to by her husband, Nechtan, Boann approached the magical Well of Segais (also known as the Connla's Well), which was surrounded by hazels. Hazelnuts were known to fall into the Well, where they were eaten by the speckled salmon (who, along with hazelnuts, also embody and represent wisdom in Irish mythology). Dylan ail Don. Dylan ail Don (also seen in other translated languages as Dylan Eil Ton (in Middle Welsh), Dylan O'Taine, Dylan ElTon, Dylan Aldon, and Dylan Ui Dan) is a character in the Welsh mythic Mabinogion tales, particularly in the fourth tale, "Math fab Mathonwy". 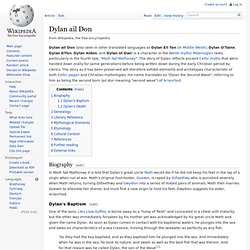 The story of Dylan reflects ancient Celtic myths that were handed down orally for some generations before being written down during the early Christian period by clerics. The story as it has been preserved will therefore exhibit elements and archetypes characteristic of both Celtic pagan and Christian mythologies. His name translates as "Dylan the Second Wave", referring to him as being the second born (ail don meaning "second wave") of Arianrhod.

Biography[edit] In Math fab Mathonwy it is told that Dylan's great uncle Math would die if he did not keep his feet in the lap of a virgin when not at war. Grannus. Name[edit] Etymology[edit] In the early twentieth century, the name was connected with the Irish grian, ‘sun’.[1] Along these lines, the god was often linked to the Deò-ghrèine and the character Mac Gréine of Irish mythology. 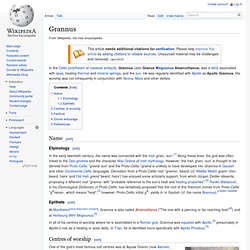 However, the Irish grian, ‘sun’ is thought to be derived from Proto-Celtic *greinā ‘sun’ and the Proto-Celtic *greinā is unlikely to have developed into Grannos in Gaulish and other Continental Celtic languages. Derivation from a Proto-Celtic root *granno- ‘beard’ (cf. Epithets[edit] At Monthelon[disambiguation needed], Grannus is also called Amarcolitanus ("The one with a piercing or far-reaching look"[4]) and at Horbourg-Wihr Mogounus.[5] In all of his centres of worship where he is assimilated to a Roman god, Grannus was equated with Apollo,[5] presumably in Apollo’s role as a healing or solar deity. Centres of worship[edit] Hot springs such as those at Aquae Granni (today's Aachen) are thought to have been dedicated to Grannus. Lir. Llŷr. Llŷr (Welsh: Llŷr Llediaith; ~Lleddiarth; "half-speech" (Skene, Bromwich[1]); "half-language"(Mackillop)[2] )) is a figure in Welsh mythology, probably originally a deity. 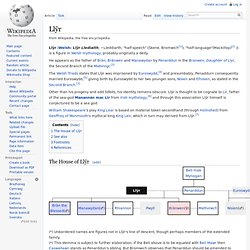 He appears as the father of Brân, Brânwen and Manawydan by Penarddun in the Branwen, Daughter of Llyr, the Second Branch of the Mabinogi.[3] The Welsh Triads states that Llŷr was imprisoned by Euroswydd,[4] and presumbably, Penaddurn consequently married Euroswydd,[5] giving birth by Euroswydd to her two younger sons, Nisien and Efnisien, as stated in the Second Branch.[3] Other than his progeny and odd tidbits, his identity remains obscure. Llŷr is thought to be cognate to Lir, father of the sea-god Manannán mac Lir from Irish mythology,[6] and through this association Llŷr himself is conjectured to be a sea god. William Shakespeare's play King Lear is based on material taken secondhand (through Holinshed) from Geoffrey of Monmouth's mythical king King Leir, which in turn may derived from Llŷr.[7] 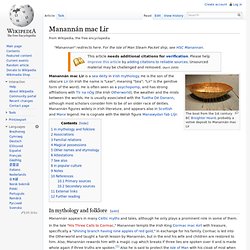 He is the son of the obscure Lir (in Irish the name is "Lear", meaning "Sea"; "Lir" is the genitive form of the word). He is often seen as a psychopomp, and has strong affiliations with Tír na nÓg (the Irish Otherworld), the weather and the mists between the worlds. He is usually associated with the Tuatha Dé Danann, although most scholars consider him to be of an older race of deities. Manannán figures widely in Irish literature, and appears also in Scottish and Manx legend. In mythology and folklore[edit] Manannán appears in many Celtic myths and tales, although he only plays a prominent role in some of them. Nodens. Temple at Lydney Park Etymology[edit] The name Nodens probably derives from a Celtic stem *noudont- or *noudent-, which J. 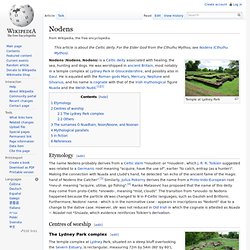 R. R. Tolkien suggested was related to a Germanic root meaning "acquire, have the use of", earlier "to catch, entrap (as a hunter)". Sequana. Representations[edit] A large bronze statue of a woman, draped in a long gown and with a diadem on her head, is believed to represent Sequana (Deyts p. 74). 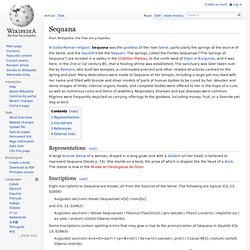