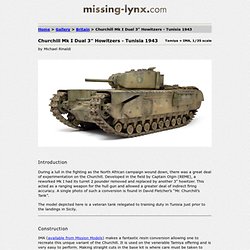 Developed in the field by Captain Olgin (REME), a reworked Mk I had its turret 2 pounder removed and replaced by another 3” howitzer. This acted as a ranging weapon for the hull gun and allowed a greater deal of indirect firing accuracy. A single photo of such a conversion is found in David Fletcher’s “Mr. Churchill’s Tank”. The model depicted here is a veteran tank relegated to training duty in Tunisia just prior to the landings in Sicily. Construction IMA (available from Mission Models) makes a fantastic resin conversion allowing one to recreate this unique variant of the Churchill. Other than that, everything is just a simple replacement of the plastic pieces. Painting and Chips Once primed, the model was first sprayed in Lifecolor's Brown acrylic and then post-shaded with lightened shades of the same color. 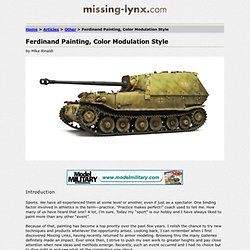 We have all experienced them at some level or another, even if just as a spectator. One binding factor involved in athletics is the term—practice. “Practice makes perfect!” Coach used to tell me. How many of us have heard that one? Because of that, painting has become a top priority over the past few years. Introduced by my friend Adam Wilder, “Color Modulation”, is a new way to execute the finish of a model via a variety of painting processes that lead to an extremely unique final presentation. This is the story of my test project.

Preparation I will need a guinea pig to use for this project. With the model ready to go, I collect the various paints and products necessary to make the transition to the new paint job. After viewing the DVD several times, I begin to understand the principles Adam was discussing and please allow me to summarize them before presenting my project. So let’s take a look at how this study in painting turned out… Airbrushing Stages Stage 1. Stug III Ausf.B by Michael Rinaldi (Tamiya 1/48) MIG JIMENEZ. Colour Modulation by Adam Wilder. Introduction by Miguel 'Mig' Jiménez As a friend of Adam, I’ve seen how how his painting skills have evolved in an never-ending search for new directions and challenges. 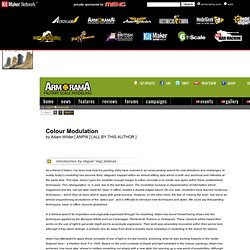 In reality, today’s modelling has become fairly ‘stagnant’ trapped within an almost stifling style which is both very technical and inflexible at the same time. This style, doesn’t give the modeller enough margin to either innovate or to create new styles within these (established) techniques. This ‘strangulation’ is, in part, due to the last few years. The incredible increase in dissemination of information which magazines and the ‘net can take credit for, have, in effect, created a double-edged sword.

In a tireless search for inspiration and originality expressed through his modelling, Adam has found himself being drawn into the techniques applied by the Baroque Artists such as Caravaggio, Rembrandt, Rubens or Velásquez. Background. Effective Pigments by Adam Wilder. Armor Modeling Today Earth tones and effects such as dust and mud have become more accepted among armor modelers over the recent years. 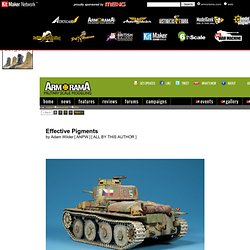 Modelers are now devoting more time and thought both to the research and realistic application of earth tones and effects on military models. Let me start this article by discussing some of my thoughts regarding these effects. There are still a number of armor modelers protesting the use of dust and mud. These individuals dispute large amounts of mud stating that it can be used to cover mistakes. Of course large amounts of mud can be used to hide mistakes on a model but this can cause other problems. I completely disagree with modelers arguing that earth colors and mud have subtracted from the artistic appearance of models. I strongly feel that applying earth tones and mud in a realistic and effective manner is indeed challenging requiring both time and research. Obtaining a Dusty Appearance to the Running Gear of an Amour Model creating the mixture. Varnish Weathering by Adam Wilder. Introduction One of the major tasks for armor modelers today is differentiating details from one another on the scale vehicles we construct and paint. 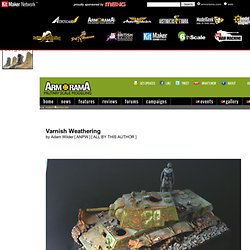 Rust weathering tutorial (With MIG Pigments) (versión en Español) Today we are going to talk about rust effects on scale models. We are going to do a quick approach to rusting techniques using pigments and a little oil paint. Rust is an important part of a weathered model, but as with any weathering technique it is easy to overdo it. We should be always very careful when applying it, understanding how rust develops, under what kind of ambient conditions and checking continously against reference material. In nature, rust appears as a reaction of the metallic elements of a vehicle (for example) and oxigen. We are try to quickly replicate four types of rust. Moderate rust over painted surface: The paint will have some rust points. Enough talk for the moment! I have a resin miscast lying around that will serve for our purposes: