Genesis (band) Peter Gabriel. Gabriel has won numerous music awards throughout his career, including three Brit Awards—winning Best British Male in 1987, six Grammy Awards, thirteen MTV Video Music Awards, the first Pioneer Award at the BT Digital Music Awards, and in 2007 he was honoured as a BMI Icon at the 57th annual BMI London Awards for his "influence on generations of music makers".[8][9][10][11] In recognition of his many years of human rights activism, he received the Man of Peace award from the Nobel Peace Prize Laureates in 2006, and in 2008, TIME magazine named Gabriel one of the 100 most influential people in the world.[12] Gabriel was also awarded the Ivor Novello Award for Lifetime Achievement in 2007,[13] and the Polar Music Prize in 2009.[14] Early life[edit] Genesis[edit] Costumes[edit] Early Genesis concerts were hampered by a bad PA system which made it difficult for audiences to understand what Gabriel was singing. 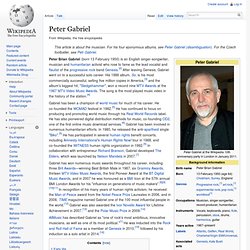 "The Old Man" was worn for "The Musical Box" from Nursery Cryme. Peter Gabriel. Phil Collins. Anthony Phillips. After leaving Genesis, Phillips studied classical music (especially classical guitar) and made recordings in collaboration with Harry Williamson, Mike Rutherford and Phil Collins, among others. 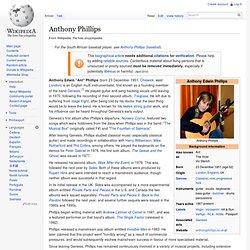 He played the keyboards on the demos for Peter Gabriel in 1976. His first solo album, The Geese and the Ghost, was issued in 1977. In its initial release in the UK, Sides was accompanied by a more experimental album entitled Private Parts and Pieces; in the U.S. and Canada the two albums were issued separately. Private Parts and Pieces II: Back to the Pavilion followed the next year, and several further sequels were issued in the 1980s and 1990s. Phillips released a mainstream pop album entitled Invisible Men in 1983. Several of his albums feature artwork by Peter Cross. Mike Rutherford. Early life[edit] Bass/guitar playing[edit] Often, bass guitar, 12-string guitar, and bass pedal playing would feature in different sections of a single song, "Supper's Ready", "Firth of Fifth", and "The Cinema Show" being good examples of this. 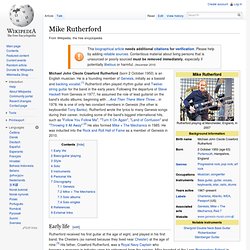 He often played a double necked instrument, custom built from a separate Rickenbacker hollowbody 12-string and 4001 bass. Rickenbacker later issued double neck bass/guitar combinations with 4080/6 and 4080/12 models. However, Rutherford had the guitar in the top position rather than the 4080's stock guitar on bottom. John Silver. He lives in London with his wife, Lucy, and children, Leo, Max, and Libby. 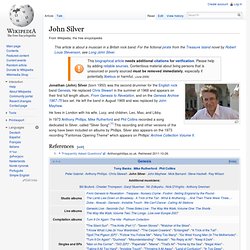 In 1973 Anthony Phillips, Mike Rutherford and Phil Collins recorded a song dedicated to Silver, called "Silver Song".[1] This recording and other versions of the song have been included on albums by Phillips. Silver also appears on the 1973 recording "Fantomas Opening Theme" which appears on Phillips' Archive Collection Volume II. Chris Stewart (author) At the recommendation of Jonathan King, Stewart was asked to leave the band in the summer of 1968 due to poor technique. 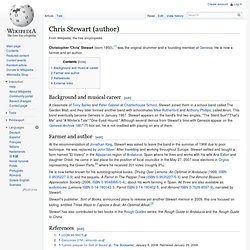 He was replaced by John Silver. After travelling and working throughout Europe, Stewart settled and bought a farm named "El Valero" in the Alpujarras region of Andalucia, Spain where he lives and works with his wife Ana Exton and daughter Chloë. He came in last place for the position of local councillor in the May 27, 2007 local elections in Órgiva representing the Green Party,[2] where he received 201 votes (roughly 8%). He is now better known for his autobiographical books, Driving Over Lemons: An Optimist in Andalucia (1999, ISBN 0-9535227-0-9) and the sequels, A Parrot In The Pepper Tree (ISBN 0-9535227-5-X) and The Almond Blossom Appreciation Society (2006, ISBN 0-9548995-0-4), about his work farming in Spain. Mick Barnard. After leaving Genesis, Barnard embarked on a successful career in audio engineering, founding the Bel Digital Audio company in 1975. [2][3] Stint in Genesis[edit] Barnard appeared with the band on their earliest TV appearance on a BBC Television programme called Disco 2. 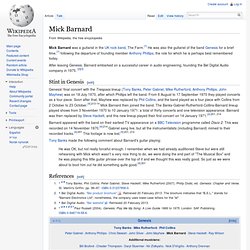 This was recorded on 14 November 1970.[4]:214 Gabriel sang live, but all the instrumentalists (including Barnard) mimed to their recorded tracks.[4]:201 This footage is now lost.[4]:201, 214 He was OK, but not really forceful enough. I remember when we had already auditioned Steve but were still rehearsing with Mick which wasn't a very nice thing to do, we were doing the end part of "The Musical Box" and he was playing this little guitar phrase over the top of it and we thought this was really good. References[edit] ^ Jump up to: a b Tony Banks; Phil Collins; Peter Gabriel; Steve Hackett; Mike Rutherford (2007).

John Mayhew (musician) Mayhew grew up in Ipswich with his brother Paul who was some ten years older. 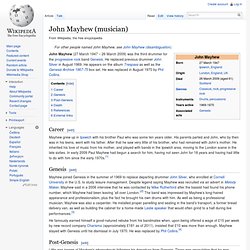 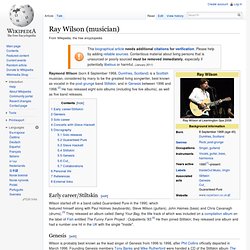 It was re-released in 2007 (remastered) including three additional songs. In 2003 he released a solo album under his own name titled Change. The next year he released another studio album entitled The Next Best Thing, which included yet another cover of "Inside".