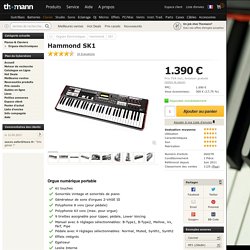 Polyvalent ismakeys le 12.12.2013 plus pratique qu'un arrangeur. Roland Super JX-10. Released in 1985 the JX-10 (Super JX) combines two individual JX-8P's for an outstandingly warm, rich and analog sound which is still used in many modern studios all over the world. 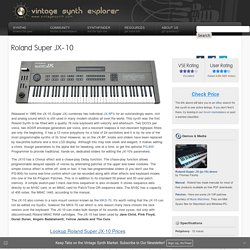 This synth was the first Roland Synth to be fitted with a quality 76 note keyboard with velocity and aftertouch. Two DCO's per voice, two ADSR envelope generators per voice, and a resonant lowpass & non-resonant highpass filters are only the beginning. It has a 12 voice polyphony for a total of 24 oscillators and it is by far one of the most programmable synths of its time! Roland Juno-106. The Juno-106 is a very common and widely used analog polysynth. 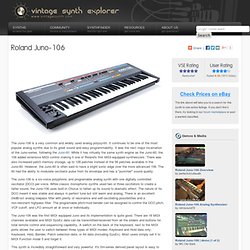 It continues to be one of the most popular analog synths due to its great sound and easy programmability. It was the next major incarnation of the Juno-series, following the Juno-60. While it has virtually the same synth engine as the Juno-60, the 106 added extensive MIDI control making it one of Roland's first MIDI-equipped synthesizers. There was also increased patch memory storage, up to 128 patches instead of the 56 patches available in the Juno-60. Rhodes Chroma Polaris. Oberheim Matrix 6. The Matrix 6 was one of the last few synthesizers from Oberheim to come out during the mid-eighties following the classic OB-series. 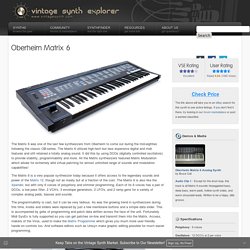 The Matrix 6 utilized high-tech but less expensive digital and midi features and still retained a totally analog sound. It did this by using DCOs (digitally controlled oscillators) to provide stability, programmability and more. All the Matrix synthesizers featured Matrix Modulation which allows for extremely wild virtual patching for almost unlimited range of sounds and modulation capabilities! The Matrix 6 is a very popular synthesizer today because it offers access to the legendary sounds and power of the Matrix 12, though not as meaty but at a fraction of the cost.

The Matrix 6 is also like the Xpander, but with only 6 voices of polyphony and slimmer programming. The programmability is vast, but it can be very tedious. The Matrix 6R (pictured above) is the Matrix 6 without a keyboard, retaining its membrane programming interface. Related forum topics. Akai AX73. Sequential Circuits Pro One. Korg Monotron.

Korg Monotron Classic The Monotron, released in 2010, is Korg's first foray into the world of analog synthesis in nearly thirty years. 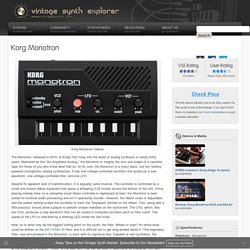 Marketed as the "Go-Anywhere Analog," the Monotron is roughly the size and shape of a cassette tape (for those of you who know what that is). Roland Juno-60. Roland SH-2. 15 of the best affordable hardware synthesisers. In bygone days hardware synths were a serious investment. 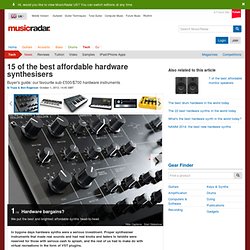 Proper synthesiser instruments that made real sounds and had real knobs and faders to twiddle were reserved for those with serious cash to splash, and the rest of us had to make do with virtual recreations in the form of VST plugins. The affordable end of synth market has, however, exploded in recent years. Big brands like Korg and Moog have begun to do the unthinkable and bring out high-quality synths in compact and sensibly priced packages, and producing competitively priced hardware now seems to be the height of fashion. Needless to say, we at MusicRadar are big fans of this ongoing trend. Roland SH-101.

The SH-101 is very cool, especially for techno, drum&bass and ACID! 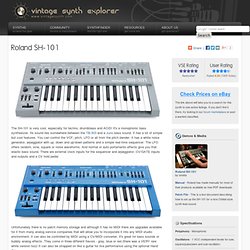 It's a monophonic bass synthesizer. Its sound lies somewhere between the TB-303 and a Juno bass sound. It has a lot of simple but cool features. You can control the VCF, pitch, LFO or all from the pitch bender. Korg DSS-1. A wonderful early digital synthesizer. 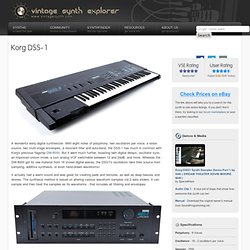 With eight notes of polyphony, two oscillators per voice, a noise source, two multi-stage envelopes, a resonant filter and auto-bend, the DSS-1 has much in common with Korg's previous flagship DW-8000. But it went much further, boasting twin digital delays, oscillator sync, an improved unison mode, a lush analog VCF switchable between 12 and 24dB, and more. Whereas the DW-8000 got its raw material from 16 stored digital waves, the DSS1's oscillators take their source from sampling, additive synthesis, or even hand-drawn waveforms!

It actually had a warm sound and was great for creating pads and textures, as well as deep basses and drones. The synthesis method is based on altering various waveform samples via 2 data sliders.