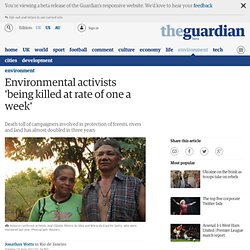 Uncontacted Tribes. Rainforest activists murdered in Brazil. The bodies of Amazon rainforest activist Joao Claudio Ribeiro da Silva and his wife Maria do Espirito Santo are carried to burial by friends and relatives, in the municipal cemetery of Maraba, in Brazil, on May 26, 2011. 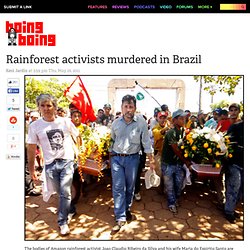 The identity of those responsible for the shooting in northern Brazil on Tuesday has not yet been determined, but da Silva predicted his own death six months ago, and was the recipient of frequent death threats by illegal loggers and cattle ranchers. "I will protect the forest at all costs. That is why I could get a bullet in my head at any moment -- because I denounce the loggers and charcoal producers," he said.

Watch his speech at TEDxAmazonia, below, in which he says he believes killing trees in the rainforest is murder (click the "cc" button in the player for English subtitles). The murders of da Silva and his wife took place as Brazil's Congress debates a divisive bill that threatens to further expand deforestation. Photos above and below: Reuters. Adelino Ramos Killed: Third Environmental Activist Murdered This Week In Brazil. SAO PAULO -- They watched as the Amazon rain forest fell around them. 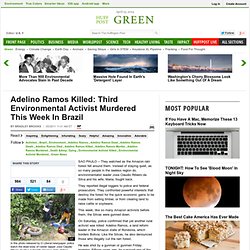 Instead of staying quiet, as so many people in the lawless region do, environmentalist leader Jose Claudio Ribeiro da Silva and his wife, Maria, fought back. They reported illegal loggers to police and federal prosecutors. They confronted powerful interests that destroy the forest for the quick economic gains to be made from selling timber, or from clearing land to raise cattle or soybeans. This week, like so many Amazon activists before them, the Silvas were gunned down.

On Saturday, police confirmed that yet another rural activist was killed: Adelino Ramos, a land reform leader in the Amazon state of Rondonia, which borders Bolivia. He was shot by a gunman or gunmen Friday morning. Suspects Arrested in Amazon Rainforest Activist Murders. Motive Uncovered? Murder-Plot of "The Rainforest Martyr" Thickens! Brazilian faces retrial over murder of activist nun Dorothy Stang in Amazon.

A Brazilian court has ordered the arrest and retrial of an Amazon rancher acquitted of orchestrating the murder of American nun and rainforest activist, Dorothy Stang. 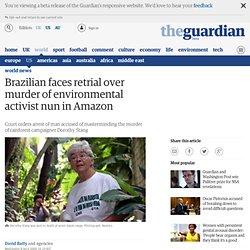 Para state's highest court threw out last year's verdict, which found Vitalmiro Bastos de Moura not guilty of the 2005 shooting of Stang, 73, who campaigned for 30 years to save the Amazon rainforest from the interests of wealthy landlords. "We're elated and we are convinced we will get a guilty verdict in the new trial," said prosecutor Edson Souza. Souza said Moura was charged with ordering Stang's murder but he had yet to be arrested. Stang was shot six times at close range with a revolver in the small jungle city of Anapu. Amazon rainforest activist shot dead. Six months after predicting his own murder, a leading rainforest defender has reportedly been gunned down in the Brazilian Amazon. 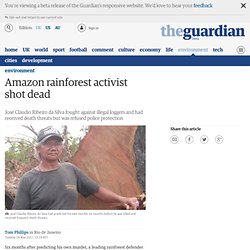 José Cláudio Ribeiro da Silva and his wife, Maria do Espírito Santo, are said to have been killed in an ambush near their home in Nova Ipixuna, in Pará state, about 37 miles from Marabá. According to a local newspaper, Diário do Pará, the couple had not had police protection despite getting frequent death threats because of their battle against illegal loggers and ranchers. On Tuesday there were conflicting reports from about whether the killing happened on Monday night or Tuesday morning. A police spokesperson said there were reports of a "double homicide" at the settlement called Maçaranduba 2.

Native Tribes, Mining, Deforestation etc. Natural Solutions. Déforestation. Death in the Amazon: Brazil accused of protecting trees but not its people. The Crying Forest Link to video: Al-Jazeera Correspondent: The Crying Forest Even here, Tuesday is an unusual day to die. 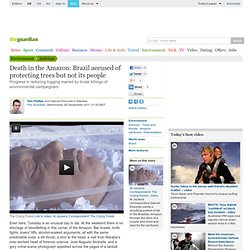 At the weekend there is no shortage of bloodletting in this corner of the Amazon. Bar brawls, knife fights, lovers' tiffs, alcohol-soaked arguments, all with the same predictable coda: a slit throat, a shot to the head, a visit from Maraba's over-worked head of forensic science, José Augusto Andrade, and a gory crime-scene photograph splashed across the pages of a tabloid.

Tuesdays, though, are normally quiet. But 24 May this year was an exception. The call came at about 10.30am, and Andrade was soon racing out of town towards the Praia Alta Piranheira settlement, a rural area about 55 miles from his antiseptic-scented morgue. At the crime scene two bodies lay beside an earth track.

Da Silva, also known as Ze Cláudio, and Espírito Santo were the latest in a string of environmentalists to die for their cause in the Brazilian Amazon. It did not work out that way. Brazil rancher convicted in U.S. nun's murder. Al-Jazeera Correspondent: The Crying Forest - video.