The murder mystery of the missing McCanns

Lyle and Marie McCann: St. Albert. Police probe mysterious acreage fire Blaze not far from burned-out motorhome By Richard Warnica, Ben Gelinas and Karen Kleiss, edmontonjournal.com July 18, 2010 •Story•Photos ( 18 )•Video ( 1 ) More Images » The scene, on July 17, 2010, of a mysterious fire just north of Niton Junction that destroyed buildings on an acreage on July, 12, 2010.Photograph by: Jimmy Jeong, edmontonjournal.comEDMONTON —Police are trying to determine whether an acreage fire north of Niton Junction is connected to the disappearance of an elderly St. 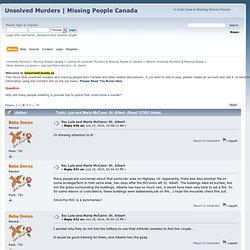 Albert couple. On July 12, two days after Lyle and Marie McCann were reported missing, a fire in Niton Junction, not far from where their burned-out motorhome was discovered, destroyed a log home, four outbuildings and several vehicles. By the time fire crews arrived on scene, about 160 kilometres west of Edmonton, all of the buildings were engulfed in flames and couldn't be saved. RCMP Sgt. They were last seen at 9:25 a.m. Their credit card hasn't been used since. Lyle marie Mc Cann Burnt RV lyle says his remains are in a field on the left side where there’s a bush a tree and long grass buried apr 25 2012 806 pm EDT2 « Paranormal UFO Aliens WOW! Severe Storm Predictions. Rcmp minnow lake campground july 5 2010 lyle marie mccann missing burnt rV found by wolf lake rd « Paranormal UFO Aliens WOW! Severe Storm Predictions. 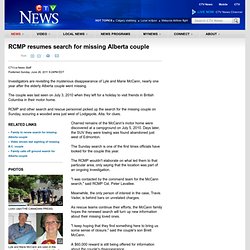 The couple was last seen on July 3, 2010 when they left for a holiday to visit friends in British Columbia in their motor home. RCMP and other search and rescue personnel picked up the search for the missing couple on Sunday, scouring a wooded area just west of Lodgepole, Alta. for clues. Charred remains of the McCann's motor home were discovered at a campground on July 5, 2010. Days later, the SUV they were towing was found abandoned just west of Edmonton. The Sunday search is one of the first times officials have looked for the couple this year. The RCMP wouldn't elaborate on what led them to that particular area, only saying that the location was part of an ongoing investigation. "I was contacted by the command team for the McCann search," said RCMP Cst. 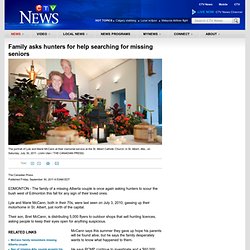 Lyle and Marie McCann, both in their 70s, were last seen on July 3, 2010, gassing up their motorhome in St. Albert, just north of the capital. Their son, Bret McCann, is distributing 5,000 flyers to outdoor shops that sell hunting licences, asking people to keep their eyes open for anything suspicious. McCann says this summer they gave up hope his parents will be found alive, but he says the family desperately wants to know what happened to them.

He says RCMP continue to investigate and a $60,000 reward for information has gone unclaimed. The couple's burning motorhome was found a few days after they disappeared, and two weeks later, the SUV they were hauling was found abandoned in the bush. Missing couple: Timeline of the McCann case - Canada. March 19: Charges against Vader are stayed by the Crown, which has one year to reactivate charges again. 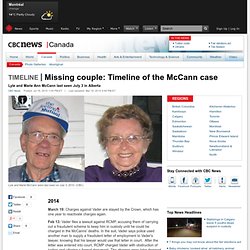 Feb 13: Vader files a lawsuit against RCMP, accusing them of carrying out a fraudulent scheme to keep him in custody until he could be charged in the McCanns' deaths. In the suit, Vader says police used another man to supply a fraudulent letter of employment to Vader's lawyer, knowing that his lawyer would use that letter in court. After the letter was entered into court, RCMP charged Vader with obstruction of justice and uttering a forged document. The charges were later dropped. The allegations in the lawsuit have not been proven in court. 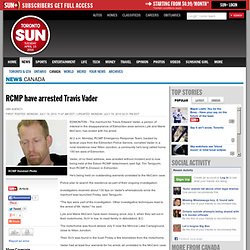 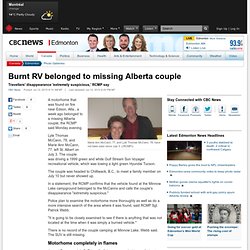 ((RCMP)) A motorhome that was found on fire near Edson, Alta., a week ago belonged to a missing Alberta couple, the RCMP said Monday evening. Lyle Thomas McCann, 78, and Marie Ann McCann, 77, left St. Albert on July 3. The couple was driving a 1999 green and white Gulf Stream Sun Voyager recreational vehicle, which was towing a light green Hyundai Tucson. The couple was headed to Chilliwack, B.C., to meet a family member on July 10 but never showed up. In a statement, the RCMP confirms that the vehicle found at the Minnow Lake campground belonged to the McCanns and calls the couple's disappearance "extremely suspicious. " Police plan to examine the motorhome more thoroughly as well as do a more intensive search of the area where it was found, said RCMP Sgt.

"It is going to be closely examined to see if there is anything that was not located at the time when it was simply a burned vehicle. " Camping at Minnow Lake Provincial Recreation Area near Edson - Alberta.