Moveable Feast -
The objectives for this research project have two stages –Firstly, it’s overarching objective is to understand the social and cultural histories of the kitset in the PacificRegion.The secondary objectives are1.

To examine how spatial, material, formal, financial, technical and conceptual constraints can serve ascatalysts for innovative design.2. To conduct an investigation into historical precedents around rationing and provisioning in suboptimalcircumstances to determine strategies for working within limited means.3. To evaluate the history of the kitset and its adaptability to a range of different contexts.4. To critically appraise the philosophical and material nature of applied sustainable design.5. To facilitate community and industry engagement with prototypes in the public realm. 9 Big Ideas That Changed The Face Of Graphic Design. What makes for good graphic design? 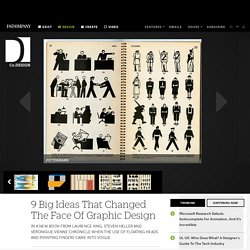 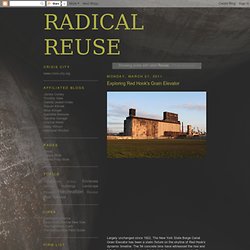 While the creative redesign of a post-industrial landscape into a place for recreation has become commonplace, what is it that we do with our post-recreational landscapes. Well in New Hampshire, a state where the culture and economy is primarily based on recreation, re-recreationalization is the obvious solution. In the case of the old Mittersill Ski Area, it is reused as a new ski area. Alright, so this doesn’t sound like the most creative of reuses. The chair lift wires are still held taut with a large concrete counterweight hanging 2 feet above the ground. IKEA develops flat pack REFUGEE CAMPS designed to replace tented cities in disaster zones. Innovative flat pack refugee shelters from IKEA will be headed for war zonesThey come equipped with solar panels, good insulation and high ceilingsShelters will be tested by Somali, Iraqi and Lebanese refugees By Olivia Williams Published: 10:27 GMT, 27 June 2013 | Updated: 16:32 GMT, 27 June 2013 Swedish furniture giant IKEA is now expanding its reach into a new frontier - warzones. 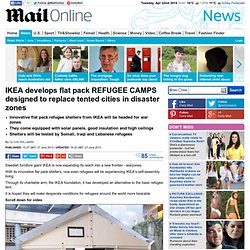 With its innovative flat pack shelters, now even refugees will be experiencing IKEA's self-assembly living. Through its charitable arm, the IKEA foundation, it has developed an alternative to the basic refugee tent. Walking Shelter. About Barnaby Bennett - Barnaby Bennett. Projectfreerange. Freerange Cooperative Ltd is a NZ based cooperative operating in Aotearoa, Australia and Atlantis. 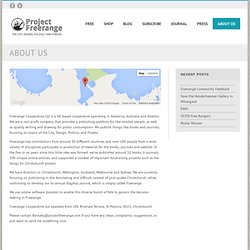 We are a non-profit company that provides a publishing platform for like-minded people, as well as quality writing and drawing for public consumption. We publish things like books and journals, focusing on topics of the City, Design, Politics, and Pirates. Freerange has contributors from around 30 different countries and over 100 people from a wide variety of disciplines participate in production of material for the books, journals and website.

In the five or so years since this little idea was formed, we’ve published around 10 books, 6 journals, 300 unique online articles, and supported a number of important fundraising projects such as the Songs for Christchurch project. We have directors in Christchurch, Wellington, Auckland, Melbourne and Sydney. Minidoc - RIKEA By Antonio Scarponi, Antonio Scarponi, Marco Lampugnani. Sheltering Door Frames - Younghwa Lee Designs a Door that Shields Against Earthquake Debris. Cushicle and Suitaloon. About Gap Filler « Gap Filler. Experiment. 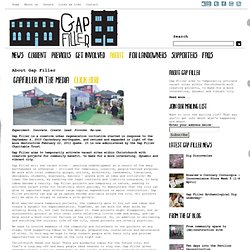 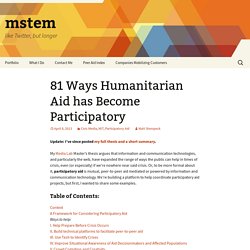 My Media Lab Master’s thesis argues that information and communication technologies, and particularly the web, have expanded the range of ways the public can help in times of crisis, even (or especially) if we’re nowhere near said crisis. Or, to be more formal about it, participatory aid is mutual, peer-to-peer aid mediated or powered by information and communication technology. We’re building a platform to help coordinate participatory aid projects, but first, I wanted to share some examples.

Table of Contents: ContextA Framework for Considering Participatory AidWays to help:I. Context The collective response to a far-away crisis in the 20th century went something like this: IconLocal « Iconathon. IconLocals are independently-organized Iconathon workshops held on a local community level.

The Noun Project created IconLocals to enable independent organizations and civic minded people to host self-organized workshops and spread the social design movement around the world. Organizing an IconLocal requires a time commitment and hard work, but is a great opportunity to create a new visual language around a civic topic you’re passionate about! To ensure that IconLocals are consistently organized to a high standard of quality, all organizers are required to submit an event application . Garbage dumpsters turned into living containers by philipp stingl. Dec 12, 2012 garbage dumpsters turned into living containers by philipp stingl garbage cans turned into ‘living containers’ by philipp stingl as the demographic evolution in germany and other countries becomes more dramatic, social systems will collapse and from the ashes an aging society will rise, marked by crime, sickness and poverty. developed by german designer philipp stingl, these products designed for the homeless and elderly population presents ’house containers’ consisting of disposable trashboxes, drinking water canisters, freighthold and a lockable livingspace with sewage systems. essentially, these ‘living containers’ testify to an active and creative lifestyle for the old age without compromises.

Stretching the 72-Hour Emergency Preparedness Window. So, first the question: why today’s focus on 72-hours’ worth of food and water? 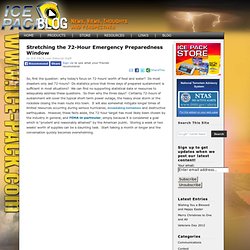 Do most disasters only last 72-hours? Do statistics prove that three days of prepared sustainment is sufficient in most situations? We can find no supporting statistical data or resources to adequately address these questions. So then why the three days? Certainly 72-hours of sustainment will cover the typical short-term power outage, the heavy snow storm or the rockslide closing the main route into town. Pedal-Powered Tiny Homes. Kevin’s Camper Bike – Stand alone art piece on a tricycle frame by Brooklyn-based Kevin Cyr, April 2008. 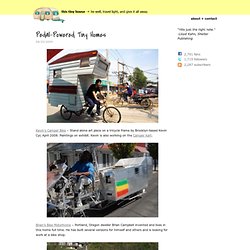 Paintings on exhibit. Moveable feast. Home Rejuvenation (by KNQ Associates): HANDS-ON SUNDAY: FURNITURE MADE OUT OF USED BOOKS. Books remain as one of the most common unwanted objects but they're also not often thought of as being recyclable. 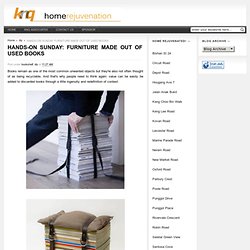 And that's why people need to think again: value can be easily be added to discarded books through a little ingenuity and redefinition of context. Anyone possessed of old magazines or unwanted books can strap them together (although this is optional) into blocks to form makeshift stools and tables. Use them with other easily obtainable materials and household items like plywood, glass or pillow, and there is literally no end to what one can achieve.

Shipping Container Homes: Cargotecture by Hybrid Architecture Container Home. Cargotecture by Hybrid Architecture Container Home. Prusso/design. Book Review - Unfolded-Paper In Design, Art, Architecture And Industry. Unfolded - Paper in Design, Art, Architecture and Industry, by Petra Schmidt and Nicola Stattmann (Amazon USA and UK.) RFID Paper Radio. Paper lately seems to have caught the fancy of artists, designers and crafters alike. The latest fusion of paper crafts and technology is a laser cut paper radio created by Matt Brown. Equip with RFID chips, each paper radio is programmed with a preference for a particular musician or band. When placed over a speaker (embedded with an RFID reader I assume), the radios triggers the musician's or band's songs to play. The concept, I believe, is to bring a certain set of tangibility to the now intangible world of digital music and internet radio.

Paper Speaker: Japanese company sells DIY cardboard speakers. It seems Japanese papercraft art isn’t limited to Origami or Pellermodels but also has something in store for us gadget fans. Case in point: The Paper Speaker [JP], announced yesterday by Tokyo-based Princeton for use with your PC (or any device sporting a USB port).

Designed like a retro audio device, the speaker will be shipped to you as a DIY cardboard kit. Buyers essentially get a 3W amp and 1W speaker (mono), just housed in a paper box and ready to be plugged into your PC via USB. Princeton offers the 60g-kit in three different versions (pictured above) for $22 each. As the Paper Speaker is Japan-only, people living outside Nippon will need to ask the Japan Trend Shop or Geek Stuff 4 U to get one for them (Michael Keferl from CScout Japan/the Japan Trend Shop writes about the kit in his blog, too). Eco friendly gadgets made from cardboard. Eco friendly gadgets made from cardboard Cardboard as we all know is easily recyclable and decomposable, which makes it one of the greenest materials around.

Furniture designers have already tapped the traits of cardboard and have revealed several green furniture units that are trendy too. After witnessing the success of the material in furniture industry, several gadget manufacturers and product designers have thought of using the material to replace plastic that commonly makes up the cases of most electronic devices. Jacqueline Bradley. Home. Heat to the Rescue: Sturdy Oil Drum Survival Kit Also Converts Into Stove. © Hikaru Imamura Like the Haitian earthquake of 2010, last year's Japanese tsunami disaster spurred designers to re-think what an effective, life-saving response might look like. B L O O D A N D C H A M P A G N E . C O M: READYKEA an Exhibition Device for DADA New York II: The Revolution to Smash Capitalism. — Conceptual Devices. Being an architect I like to design things that anyone can manufacture. A good design can turn the world population into the bigger creative industry ever known: an aware industry where ideas becomes effectively tangible.

Word It Search. Affordable bamboo housing floats when it floods. © H&P Architects Creating dwellings that can stand up to the extreme forces of nature presents a challenging design problem, no matter the locale. Hoping to address the issue of extensive loss of homes and displacement due to severe flooding in Southeast Asia, Vietnamese design firm H&P Architects created this low-cost, disaster-resistant housing prototype that actually floats atop a base made of reused oil drums. © H&P Architects. Hotello packs a 40 square foot hotel room and office into a box. Would-be Hoboes: Your Dream House Has Arrived. WANTED: The JakPak, a Jacket That Converts Into a Tent. Sign of the Times: Your Personal Hobo-mobile. A Portable, Rolling Home That Unfolds Like a Slinky. Like any desk jockey, we've got a keen interest in any innovation that makes hobo life possible.