Valorant Global Esports Launch Film. FITC Tokyo 2015 (2015) — Art of the Title. AIRCRAFT FORUM OPENING VIDEO. 11.22.63 (2016) Kong: Skull Island (2017) Down the Rabbit Hole Festival 2016 (2016) At just over a minute in length, the title sequence for Dutch festival Down The Rabbit Hole is a transcendental fall through colour and shape and the edge of madness. 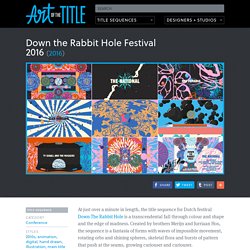 Created by brothers Merijn and Jurriaan Hos, the sequence is a fantasia of forms with waves of impossible movement, rotating orbs and shining spheres, skeletal flora and bursts of pattern that push at the seams, growing curiouser and curiouser. “Did you ever see such a thing as a drawing of a muchness?” Asked the Dormouse in Lewis Carroll’s Alice in Wonderland, and here the Hos brothers answer, blurring the lines between two- and three-dimensional space, using music as propellant, ushering the viewer beyond the boundaries of experience, with moments of quiet purity and strange fascination. After a fall such as this, it’s no wonder the festival is able to grow each year, inviting successive streams of attendees to return in search of the fantastic. So, Merijn and Jurriaan, you’re brothers and you work together on projects. Franca: Chaos and Creation (2016) CAMP 2016 — Titles. Yellowstone - Elastic. OSS 117 Le Caire Nid D'Espion Générique. Sans titre. Alias Grace (2017)

Playgrounds Festival: 2014 Title Sequence. Man on a Ledge. ParaNorman (2012) An OUTCAST BOY who can commune with the DEAD… A TOWN obsessed with the past, UNWILLING to accept him! 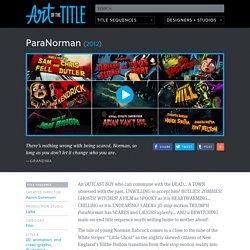 BULLIES! ZOMBIES! GHOSTS! WITCHES! A FILM as SPOOKY as it is HEARTWARMING… CHILLING as it is ENDEARING! The tale of young Norman Babcock comes to a close to the tune of the White Stripes’ “Little Ghost” as the slightly skewed citizens of New England’s Blithe Hollow transition from their stop-motion reality into beautifully rendered motion paintings. Art of the Title speaks to LAIKA/house artist and illustrator AARON SORENSON about the gleefully spooky and charmingly realized main-on-end titles of ParaNorman. How did the first meeting about this sequence go? Arianne Sutner, one of the co-producers, spearheaded the process. We then had the initial meeting where Chris Butler and Sam Fell, the film’s co-directors, laid out their vision for the titles, which was inspired by old Hollywood horror posters — specifically old B movies artwork with slightly garish qualities. 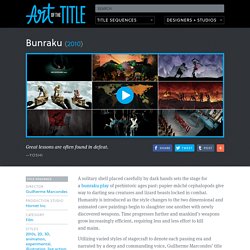 Humanity is introduced as the style changes to the two dimensional and animated cave paintings begin to slaughter one another with newly discovered weapons. Time progresses further and mankind’s weapons grow increasingly efficient, requiring less and less effort to kill and maim. Utilizing varied styles of stagecraft to denote each passing era and narrated by a deep and commanding voice, Guilherme Marcondes’ title sequence for Guy Moshe’s Bunraku brings us forward to the time of our story.

A tyrant strides forth with his axe and an army stands in formation. A discussion with title sequence director GUILHERME MARCONDES at Hornet. Can you give us a little background on yourself—where you started and where you are now? GM: I’m originally from Brazil, where I attended architecture school. BUNRAKU Opening Sequence on Vimeo. Les grands mythes (1/20) - Zeus, la conquête du pouvoir. 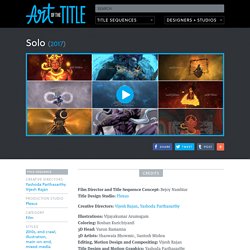