Khan Academy. Productivity Hacks From Startup Execs. What You Need to Know About MOOC's - Technology. We'll be updating this page regularly.Please check back for updates. 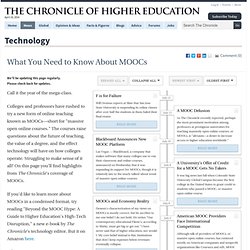 Call it the year of the mega-class. Colleges and professors have rushed to try a new form of online teaching known as MOOCs—short for "massive open online courses. " The courses raise questions about the future of teaching, the value of a degree, and the effect technology will have on how colleges operate. MoocGuide - 7. How to make your MOOC mobile accessible. Top Ed-Tech Trends of 2012: MOOCs. Part 5 of my Top Ed-Tech Trends of 2012 series The Year of the MOOC Massive Open Online Courses. 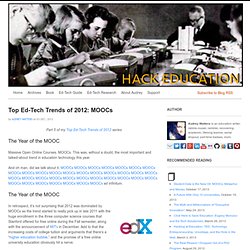 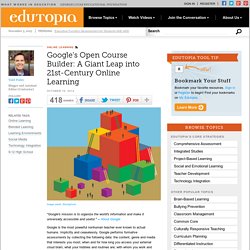 " -- About Google Google is the most powerful nonhuman teacher ever known to actual humans. How to Succeed in a Massive Online Open Course (MOOC) by Apostolos Koutropoulos & Rebecca J. Hogue. “MOOCs provide a new methodology and modality for teaching and learning. 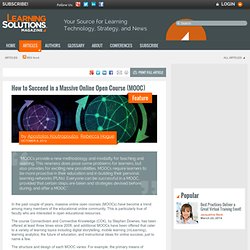 This newness does pose some problems for learners, but also provides for exciting new possibilities. MOOCs require learners to be more proactive in their education and in building their personal learning networks (PLNs). Everyone can be successful in a MOOC, provided that certain steps are taken and strategies devised before, during, and after a MOOC.” In the past couple of years, massive online open courses (MOOCs) have become a trend among many members of the educational online community. This is particularly true of faculty who are interested in open educational resources. Open Online Courses: Higher Education of the Future? - Techonomy. By Eric Rabkin One instructor’s firsthand look behind the scenes of the movement offering online education to the masses. 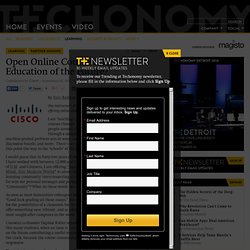 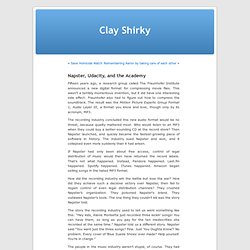 This wasn’t a terribly momentous invention, but it did have one interesting side effect: Fraunhofer also had to figure out how to compress the soundtrack. The result was the Motion Picture Experts Group Format 1, Audio Layer III, a format you know and love, though only by its acronym, MP3. The recording industry concluded this new audio format would be no threat, because quality mattered most. Who would listen to an MP3 when they could buy a better-sounding CD at the record store? Then Napster launched, and quickly became the fastest-growing piece of software in history. If Napster had only been about free access, control of legal distribution of music would then have returned the record labels. How did the recording industry win the battle but lose the war? MOOCs are Marketing. Earlier this week, Georgia Tech and eleven other higher education institutions announced their participation in Coursera, a company that hosts online courses.

Reactions have been predictably dramatic, as exemplified by Jordan Weissman's panegyric in the Atlantic, titled The Single Most Important Experiment in Higher Education. I'll spare observations on the obvious problems with Weissman's article, like the witless claim that lectures as web video somehow "reinvent" the lecture. Or the fact that Weissman published an article two weeks ago titled Why the Internet Isn't Going to End College As We Know It. Take this excerpt instead: Disruptive innovation: Open online courses are changing education forever. When the first movable-type printing press began churning out books in 1439, knowledge that belonged to an elite few flowed to masses of hungry learners.

This year, something similar happened. Select courses taught at places like Stanford on subjects like physics were offered for free online, meaning that a level of education once available only to Ivy League-level college students is now an option in places like Pakistan, Ghana and Tibet. These courses, called Massive Open Online Courses (or MOOCs) make education cheaper and more accessible, but some say they have potential to undermine the current profit model. Jump Off the Coursera Bandwagon - Commentary. By Doug Guthrie Like lemmings, too many American colleges are mindlessly rushing out to find a way to deliver online education, and more and more often they are choosing Coursera. The company, founded this year by two Stanford University computer scientists, has already enrolled more than two million students, has engaged 33 academic institutions as partners, and is offering more than 200 free massive open online courses, or MOOC's.

California State U. Will Experiment With Offering Credit for MOOCs - Technology. By Jeffrey R. 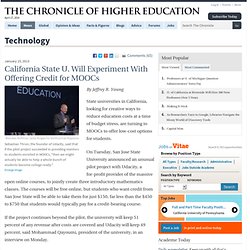 Young State universities in California, looking for creative ways to reduce education costs at a time of budget stress, are turning to MOOCs to offer low-cost options for students. Coursera Announces Details for Selling Certificates and Verifying Identities - Wired Campus. How is a major provider of free online courses going to tell whether you are who you say you are? 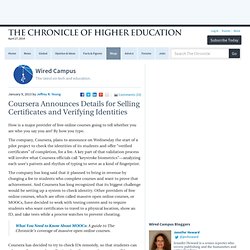 By how you type. The company, Coursera, plans to announce on Wednesday the start of a pilot project to check the identities of its students and offer “verified certificates” of completion, for a fee.