NPR Choice page. What Should We Do With Confederate Monuments? To the Editor: Re “Confederate Monuments Fall, and Tempers Flare” (front page, May 8): The Confederate obelisk that was removed last month in New Orleans was erected to commemorate a violent white uprising against racial integration during Reconstruction and originally bore a plaque declaring that “the national election of November 1876 recognized white supremacy in the South and gave us our state.” 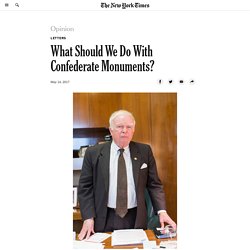 Toppling statues is a first step toward ending Confederate myths. Confederate Monuments. Topic Summary More than 150 years after the Civil War, there is a new drive to remove Confederate monuments. 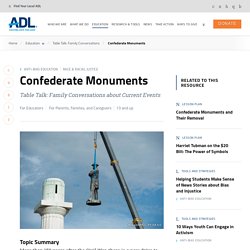 In April and May 2017, the New Orleans City Council voted to remove four Confederate monuments from their city. Tempers Flare Over Removal of Confederate Statues in New Orleans. On Monday night, defenders of the statues squared off against a large group of opponents near the Davis statue in the Mid-City area. 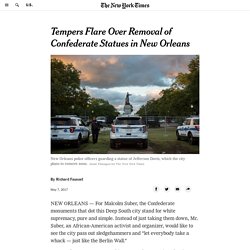 “Get the hell out of New Orleans,” the multiracial group of opponents sang, to the tune of “The Battle Hymn of the Republic,” using much stronger language, “because you’re not wanted here.” The police arrested five people on charges of disturbing the peace and other infractions, and city officials have surrounded the statue with barricades and police guards. But the crowds continued to gather, and some defenders of the statues have come heavily armed. A man who referred to himself only as K.

K. walked along a median on Tuesday carrying an AK-47, with a Glock handgun on his waist. Mr. On Sunday afternoon, anti-statue protesters numbering 500, according to police estimates, took to the streets in a boisterous second line parade through the French Quarter and downtown, ending at Lee Circle, the roundabout where the Lee statue is. Whose Heritage? Public Symbols of the Confederacy. Court Case. REBEL FELL Iconoclasm will ris. Tearing Down Statues of REAL H. Patagonia v. Trump. During a monthslong public comment period, the Interior Department received more than two million submissions, the majority of them supporting the continued protection of public lands. 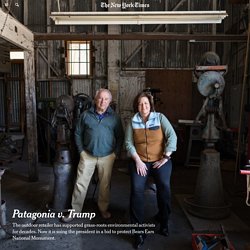 Patagonia said its customers had submitted more than 150,000 comments. During the first months of the new administration, Ms. Marcario and another Patagonia employee, Hans Cole, made numerous attempts to meet with Mr. Zinke as part of outdoor industry delegations, according to internal Interior Department emails reviewed by The Times. No meeting with Mr. Around this time, Patagonia also began planning for its eventual lawsuit.

Meanwhile, Patagonia ramped up its publicity efforts around Bears Ears and public lands. And Patagonia succeeded in its monthslong, retaliatory campaign to move a lucrative trade show out of Utah. The Real Story Behind All Those Confederate Statues. Vox points me today to some data I was looking for last night. 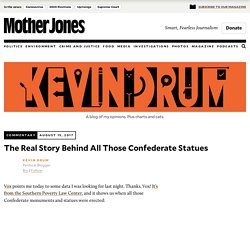 Thanks, Vox! It’s from the Southern Poverty Law Center, and it shows us when all those Confederate monuments and statues were erected: This illustrates something that even a lot of liberals don’t always get. Most of these monuments were not erected right after the Civil War. In fact, all the way to 1890 there were very few statues or monuments dedicated to Confederate leaders. 1861-1865: Civil War.1865-1875: Reconstruction Era.1875-1895: Reconstruction Era ends.

Yes, these monuments were put up to honor Confederate leaders and soldiers. The New Monuments That America Needs. Before protesters in America and Europe began painting over statues, or toppling them, or hanging them from trees, or rolling them into the nearest river, the historian Paul Farber noticed that people were putting masks on them. 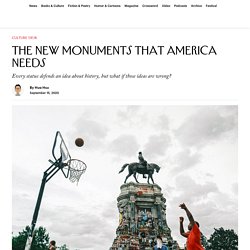 In the early days of the pandemic, from Wuhan to New York, Valencia, and Limerick, anonymous people placed COVID-19 coverings over the faces of local monuments. Yale Law Journal - Monuments to the Confederacy and the Right to Destroy in Cultural-Property Law. Abstract. 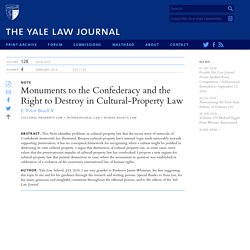 This Note identifies problems in cultural-property law that the recent wave of removals of Confederate memorials has illustrated. Because cultural-property law’s internal logic tends inexorably towards supporting preservation, it has no conceptual framework for recognizing when a culture might be justified in destroying its own cultural property. I argue that destruction of cultural property can, in some cases, serve values that the preservationist impulse of cultural-property law has overlooked. Christopher Columbus Statue Quietly, Officially Removed From Tower Grove Park. Updated at 5:50 p.m., June 16 A crew removed the statue of Christopher Columbus from Tower Grove Park in St. 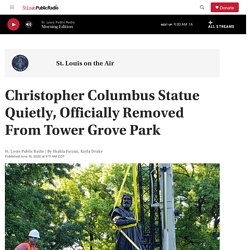 Louis with little fanfare early Tuesday morning. Monuments That Celebrate Communal Struggles, Not Flawed Men. A striking billboard looms over the gates at the main entrance of Socrates Sculpture Park. 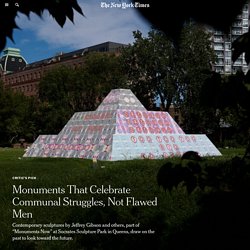 It’s not an advertisement but an artwork by Nona Faustine that speaks to the reckoning that — fueled by a summer of protests — has led to the toppling of monuments across this country. Titled “In Praise of Famous Men No More,” its soft-focus images show the Lincoln Memorial in Washington side by side with the equestrian statue of Theodore Roosevelt outside the American Museum of Natural History in New York City (which has long been considered a symbol of colonialism and racism and is in the process of being removed). A hazy horizontal line runs across the middle of each photographic rendering, as if the sculptures were being crossed out or viewed from behind bars. The negation seems less individual than categorical. Both presidents are venerated for progressive policies, but in reality, their legacies are mixed. 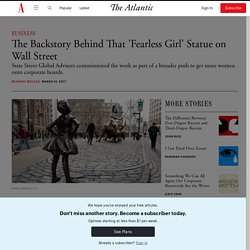 Can you explain that? O’Hanley: There has been progress made in diversity overall as well as diversity on boards. I don’t mean to suggest no one is doing anything. A lot of companies are working very hard. But we are frustrated because a quarter of the Russell 3000, and these are the biggest companies in America, have no women board members. New Suffrage Statue Will Be Central Park's Only Monument To Depict Real Women. This year marked the centennial of the ratification of the 19th Amendment that gave white women the right to vote. And next week will mark another first: Sculptor Meredith Bergmann will unveil Central Park's first statue to depict real women, a 14-foot-tall bronze monument paying homage to Sojourner Truth, Susan B.

Anthony and Elizabeth Cady Stanton — all of whom were at the forefront of the national suffrage movement. Both Stanton and Anthony strongly opposed the ratification of the 15th Amendment, which granted Black men the right to vote. Stanton made it clear in her fight for voting rights that when she said women, she meant white. Black suffragists were often told to march at the back of a protest. Yet Sojourner Truth, who was formerly enslaved, carried her fight against slavery into the suffrage movement with her famous “Ain't I a Woman?” Confederate and Columbus statues toppled by US protesters. Defend History. Tear Down the Confederate Statues. For indispensable reporting on the coronavirus crisis, the election, and more, subscribe to the Mother Jones Daily newsletter. After the Civil War, Edward Virginius Valentine returned from Europe to his hometown of Richmond, Virginia—the former Confederate capital—and began using his training in classical sculpture to enshrine the myth of the Lost Cause.

Over the next few decades Valentine made a career of sculpting monuments to defenders of slavery, building tributes to Robert E. Lee and Stonewall Jackson, among others. - The Washington Post.