It's time to Label GMOs: America's Right to Know. A copy of this petition will be delivered to the White House and FDA: Dear First Lady Michele Obama and President Obama, 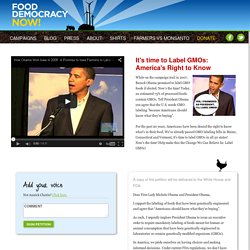 County in Oregon Soon to be Free of Genetically-Modified Crops. In three weeks, propagating, raising or growing any kind of genetically-modified crop will be considered criminal activity in Josephine County, Oregon. 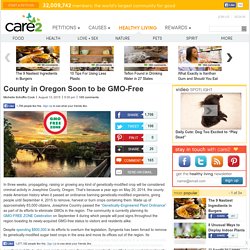 That’s because a year ago on May 20, 2014, the county made American history when it passed an ordinance banning genetically-modified organisms, giving people until September 4, 2015 to remove, harvest or burn crops containing them. Made up of approximately 83,000 citizens, Josephine Country passed the “Genetically-Engineered Plant Ordinance” as part of its efforts to eliminate GMOs in the region. New Study Shows GMO Soy Accumulates Cancer Causing Chemical Formaldehyde. A copy of your letter of support will be delivered to President Obama, your Members of Congress and the FDA: Dear President Obama, members of Congress and the FDA, As your constituent, I'm calling on you to institute an immediate ban on the approval of new genetically engineered foods based on the new peer reviewed studies from the International Center for Integrative Systems that show significant disruption of basic cellular functions of genetically engineered crops and shatters the current FDA regulatory framework of "substantial equivalence" of GMOs and non-GMO foods. 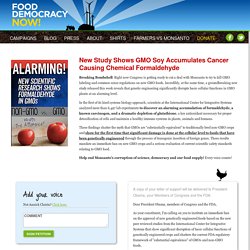 Unfortunately, for the past 20 years, the biotech industry has been allowed to rig the rules against real science and corporations like Monsanto should no longer be able to corrupt the rules of science or our democracy. The Monsanto Protection Act is back. The biggest threat to GMO labeling that we’ve ever seen could soon become law if we don’t act now. 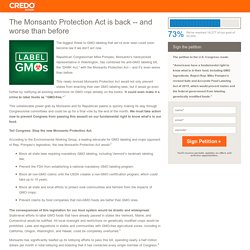 Republican Congressman Mike Pompeo, Monsanto’s hand-picked representative in Washington, has combined his anti-GMO labeling bill, the “DARK Act,” with the Monsanto Protection Act – and it’s even worse than before. This newly revised Monsanto Protection Act would not only prevent states from enacting their own GMO labeling laws, but it would go even further by nullifying all existing restrictions on GMO crops already on the books. It could even make it a crime to label foods as “GMO-free.”1 This unbelievable power grab by Monsanto and its Republican pawns is quickly making its way through Congressional committees and could be up for a final vote by the end of the month. Tell the FDA to label GMO foods! - SierraRise - Stories to Save the Planet.

Friends of the Earth. Tell your Representatives to stand up for GMO labeling! 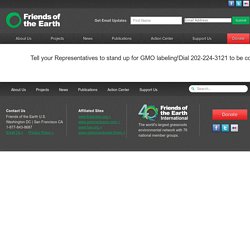 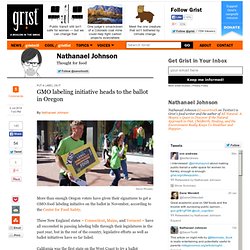 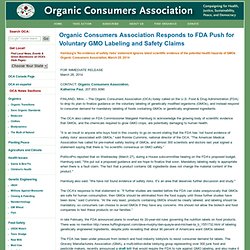 Food & Drug Administration (FDA) to drop its plan to finalize guidance on the voluntary labeling of genetically modified organisms (GMOs), and instead respond to consumer demand for mandatory labeling of foods containing GMOs or genetically engineered ingredients. The OCA also called on FDA Commissioner Margaret Hamburg to acknowledge the growing body of scientific evidence that GMOs, and the chemicals required to grow GMO crops, are potentially damaging to human health.

Tell Starbucks to Support Organics and Stop Fighting GMO Labeling. Dear Howard Schultz, CEO of Starbucks, As a concerned consumer who cares about the environmental, social, and health impacts of the food I buy and the companies I support, I urge you to serve organic dairy milk at Starbucks, and stop using milk sourced from factory farms, where cows are fed diets of genetically modified grains and routinely administered antibiotics. 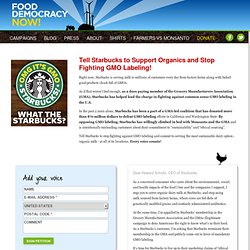 At the same time, I’m appalled by Starbucks’ membership in the Grocery Manufacturers Association and the GMAs illegitimate campaign to deny Americans the right to know what’s in their food. Tell Congress: Don’t Sponsor an Industry-Crafted Federal GMO Labeling Bill that Would Preempt States’ Rights to Enact Mandatory GMO Labeling Laws! Monsanto’s Evil Twin. Before there was Monsanto with its GMOs (genetically modified organisms), there were junk food companies hard at work peddling their influence, and promoting their agendas, in Congress. 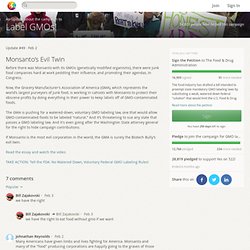 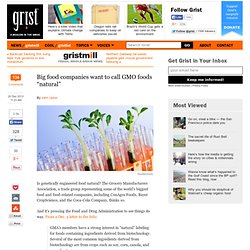 The Grocery Manufacturers Association, a trade group representing some of the world’s biggest food and food-related companies, including ConAgra Foods, Bayer CropScience, and the Coca-Cola Company, thinks so. And it’s pressing the Food and Drug Administration to see things its way. From a Dec. 5 letter to the feds: GMO and ‘Natural’ Food Fight: Treacherous Terrain. For related articles and more information, please visit OCA's Genetic Engineering page, and our Millions Against Monsanto page. 2014 is shaping up to be a decisive year for the future of food and farming. Grassroots activists are gearing up for new legislative battles, including state GMO labeling laws and county bans on growing genetically engineered crops. Meanwhile the multinational food corporations last month raised the stakes in the ongoing David vs. Goliath battle by petitioning the U.S. Sunspot Natural Market, Kokomo and West Lafayette, IN · Organic Retail and Consumer Alliance. 3717 S. Reed Rd. Kokomo, IN 46902, and 500 Sagamore Pkwy W, West Lafayette, IN 47906.

A Treacherous Road Ahead for Food Labeling? For consumers and the anti-GMO movement, 2014 could be a year of treacherous twists and turns. Will the Grocery Manufacturers Association (GMA) convince the U.S. Unite America Mr. President - Label GMOs! Senate Votes: Keep Consumers in the Dark About GMO Food. By Mat McDermott, TreeHugger I have to say that I didn’t expect the vote to go otherwise, but I’m surprised it was so lopsided: The Farm Bill amendment that would unambiguously give states the rights to label genetically modified ingredients in food without fear of reprisal from biotech companies has been voted down in the Senate. The amendment, introduced by Bernie Sanders (I-VT), Barbara Boxer (D-CA) and Mark Begich (D-AK), was voted down by 73-26.

Bernie Sanders responded on his Senate website: “This is the very first time a bill on labeling genetically engineered food has been brought before the Senate. It was opposed by virtually every major food corporation in the country. Food industry’s secret plan for a GMO (non)-labeling law. The captains of the food industry have decided it’s time for a federal GMO-labeling law. Specifically, they’re aiming for a labeling law that doesn’t actually require labeling at all — but does pre-empt all of the more stringent labeling laws now making their way through state legislatures.

In other words, they want a voluntary-labeling law that stops states from enacting anything else. (Yes, food makers can already voluntarily label their products as non-GM.) This story comes from Politico, where Jenny Hopkinson and Helena Bottemiller Evich got their hands on a leaked description of the proposed law. Stop Monsanto’s secret plan to Kill GMO labeling. Your member of Congress and the FDA will receive a copy of your letter.