_BahrainReport_web-FINAL. Bahrain: How the police recruit radicals. Religion and Politics in Bahrain: The Uprising is Over. But What Is the Price of Bahrain's Victory? For a recent publication on Bahrain, I was forced to go back and forth with an editor over the question of whether the February 14th uprising should be introduced in the present or past tense. 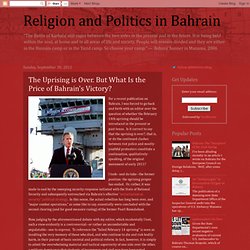 Is it correct to say that the uprising is over? , that is, or do the continued clashes between riot police and mostly-youthful protesters constitute a continuation, qualitatively-speaking, of the original movement of early 2011? I took--and do take--the former position: the uprising proper has ended. Or, rather, it was made to end by the sweeping security response initiated with the State of National Security and subsequently entrenched via Bahrain's effective "sectarianism as security" political strategy.

In this sense, the actual rebellion has long been over, and "major combat operations," as some like to say, essentially were concluded with the second clearing (and for good measure razing) of the former Pearl Roundabout. There has been no civil war in Bahrain, so our model did not let us down! Bahrain's Triangle of Conflict - By Reza H. Akbari and Jason Stern. The common media account of the crisis in Bahrain weaves a compelling narrative of a Shiite-majority people struggling to achieve their inalienable rights against a Sunni-dominant government. 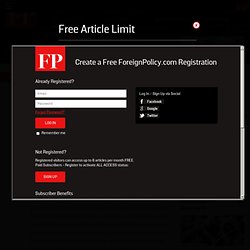 This "government versus the people" narrative implies that if only the government sheds its obstinacy or the people moderate their demands, then a political solution can be found in Bahrain. Yet the reality is far more complex. In fact, there are three main camps in Bahraini politics -- the government, the opposition, and the loyalist opposition -- that do not fall neatly along sectarian lines. This triangle of conflict grows more entrenched by the day as moderates fall victim to the ever increasing fragmentation and polarization of Bahraini society. Any political process that holds any hope of achieving real reconciliation must include all three camps. Formula One: why we’re watching Bahrain for all the wrong reasons. By Kristian Ulrichsen / 8 March, 2012. 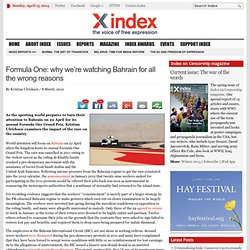 The imperial narcissism of the F1 boycotters. There have been some people willing to forego the hyperbole. ‘It’s a car race’, said F1 driver Mark Webber: ‘There are a hell of a lot of people in the world who don’t have a clue there is a grand prix in Bahrain next weekend so let’s not get too wrapped up in our own bubble about how important it is.’ In fact, one of the few places where the Bahrain grand prix is not being trumpeted as the Most Important Sporting Event Ever has been among those involved in F1.

Its chief executive Bernie Ecclestone offered a typically phlegmatic defence of F1’s willingness to go ahead with Sunday’s grand prix: ‘It’s another race on the calendar, it’s not our business running the country. If it was a pop singer they would be there. People are there carrying out their business as normal, I am told.’ The March of Bahrain’s Hardliners. Conservative figures within the Bahraini royal family are redoubling their efforts to subdue the opposition. 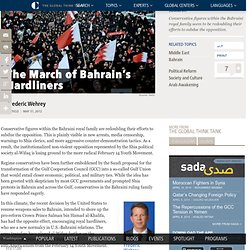 This is plainly visible in new arrests, media censorship, warnings to Shia clerics, and more aggressive counter-demonstration tactics. As a result, the institutionalized non-violent opposition represented by the Shia political society al-Wifaq is losing ground to the more radical February 14 Youth Movement. Regime conservatives have been further emboldened by the Saudi proposal for the transformation of the Gulf Cooperation Council (GCC) into a so-called Gulf Union that would entail closer economic, political, and military ties. While the idea has been greeted with skepticism by most GCC governments and prompted Shia protests in Bahrain and across the Gulf, conservatives in the Bahraini ruling family have responded eagerly.

New Crackdown with Token Concessions Gulf Unity and Its Discontents.

Bahrain in the "Arab Spring"

A Family Under Siege: The Khawajas in Bahrain. An important aspect of many of the popular movements of the Arab Spring has been the emergence of different generations of activists from the same families. 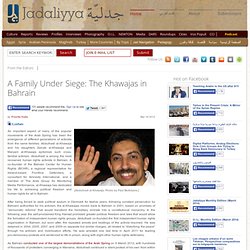 Abdulhadi al-Khawaja and his daughters Zainab al-Khawaja and Maryam al-Khawaja epitomize such cross-familial activism. Abdulhadi is among the most renowned human rights activists in Bahrain. A co-founder of the Bahrain Center for Human Rights (BCHR), a regional representative for Ireland-based Frontline Defenders, a consultant for Amnesty International, and a member of The Arab Group for Monitoring Media Performance, al-Khawaja has dedicated his life to achieving political freedom and human rights for all in Bahrain. After being forced to seek political asylum in Denmark for twelve years, following constant persecution by Bahraini authorities for his activism, the al-Khawajas moved back to Bahrain in 2001, based on promises of “democratic reforms” that would transform the hereditary emirate into a constitutional monarchy. 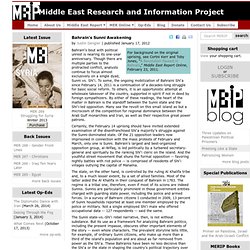 Bahrain’s bout with political unrest is nearing its one-year anniversary. Though there are multiple parties to the protracted conflict, analysts continue to focus almost exclusively on a single dyad, Sunni vs. Shi‘i. To some, the ongoing mobilization of Bahraini Shi‘a since February 14, 2011 is a continuation of a decades-long struggle for basic social reform. To others, it is an opportunistic attempt at wholesale takeover of the country, supported in spirit if not in deed by foreign sympathizers. Come and buy our weapons, UK arms fair tells Bahrain - UK Politics, UK.

The inside track: how lobbyists have helped launder Bahrain’s reputation. Lobbyists and paid advisers have stepped forward to speak up for Bahrain’s government. 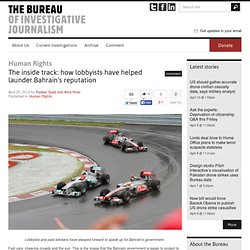 Fast cars, cheering crowds and the sun. This is the image that the Bahraini government is eager to project to the world during the Formula One Grand Prix – which kicks off with team practice today. All this projects the image of a country that has moved on from the protests that rocked the island state last year – protests that have continued into 2012 with over 100,000 people marching last month. But the Bahraini government continues to use force against protestors and, according to an Amnesty International report published this week, reports of torture continue to be widespread. “With the world’s eyes on Bahrain as it prepares to host the Grand Prix, no one should be under any illusions that the country’s human rights crisis is over,” said Amnesty’s Middle East and North Africa deputy director Hassiba Hadj Sahraoui. Bahrain has responded by embarking on a charm offensive. Why?