Here’s A Video Of Michael J. Fox Trying On Real Self-Lacing Nikes. Nike has been teasing the idea of releasing self-lacing shoes — a la Back To The Future — for years. 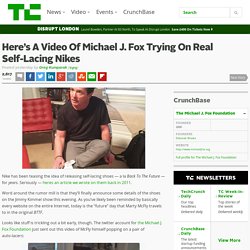 Seriously — heres an article we wrote on them back in 2011. Word around the rumor mill is that they’ll finally announce some details of the shoes on the Jimmy Kimmel show this evening. As you’ve likely been reminded by basically every website on the entire Internet, today is the “future” day that Marty McFly travels to in the original BTTF. 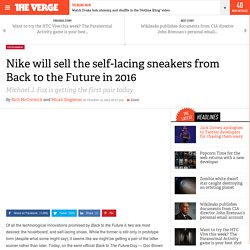 While the former is still only in prototype form (despite what some might say), it seems like we might be getting a pair of the latter sooner rather than later. Today, on the semi-official Back to The Future Day — Doc Brown famously punched October 21st into his time-traveling Delorean Robert Zemeckis' sequel — Nike has given Back to The Future II star Michael J. Fox a real-life pair of its self-lacing MAG shoes. "We’re now proud to turn that fiction into fact. " In a letter Fox posted on Twitter, legendary Nike designer Tinker Hatfield said, "Although the project started as science fiction, we’re now proud to turn that fiction into fact. " Email from Michael J. Fox: "Today, we're in the future." Michael J. 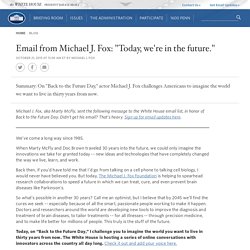 Fox, aka Marty McFly, sent the following message to the White House email list, in honor of Back to the Future Day. Didn't get his email? That's heavy. Sign up for email updates here. We’ve come a long way since 1985. When Marty McFly and Doc Brown traveled 30 years into the future, we could only imagine the innovations we take for granted today -- new ideas and technologies that have completely changed the way we live, learn, and work.

Back then, if you’d have told me that I’d go from talking on a cell phone to talking cell biology, I would never have believed you. So what’s possible in another 30 years? Today, on “Back to the Future Day,” I challenge you to imagine the world you want to live in thirty years from now. We can't all be brain scientists, but all of us can get involved. Together, we’ll make neurological illness a thing of the past. And if we all eventually get hoverboards, well -- that's a bonus. --Michael J. The 'Back To The Future' Nikes are here, and Michael J. Fox is ready. Updated at 3:01 p.m. 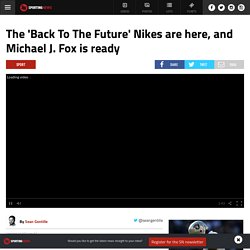 ET Every six months or so for the last couple years, some poor, misguided folks on the internet get conned into thinking it's "Back To The Future Day" — meaning, the "future" date Marty McFly and Doc Brown travel to in "Back To The Future II. " And every time it happens — usually through someone photoshopping the DeLorean date input screen — it gets funnier and more mockable. People are increasingly desperate for the dopamine ping that nostalgia provides, and mining that nostalgia for internet traffic is a hell of a racket. All 15 #BTTF days we've endured are reminders of that. Presented by Toyota Mirai. 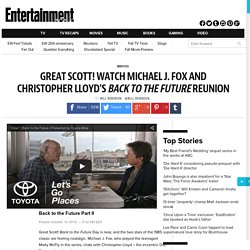 Back to the Future Day is near, and the two stars of the 1985 classic are feeling nostalgic. Michael J. Fox, who played the teenaged Marty McFly in the series, chats with Christopher Lloyd – the eccentric Doc Brown — in a brand new video. Related The spot, produced by Toyota, features the pair in a diner, listing things Back to the Future Part II correctly predicted back in 1989. 3D movies and fingerprint technology are here, but the self-tying Nikes aren’t around (yet). “Can you believe we said fax machines would still be around?” Cool movie toys: Hot Toys' 'Back to the Future' Marty McFly. Michael J. Fox finally turned into 'Future' action figure. Thirty years after the classic action comedy film's debut, "Back to the Future" star Michael J. 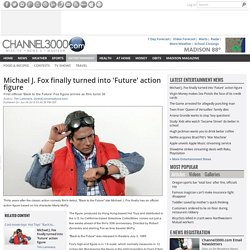 Fox finally has an official action figure based on his character Marty McFly. The figure, produced by Hong Kong-based Hot Toys and distributed in the U.S. by California-based Sideshow Collectibles, comes out just a few weeks ahead of the film's 30th anniversary. Directed by Robert Zemeckis and starring Fox as time traveler McFly, "Back to the Future" was released in theaters July 3, 1985. Fox's high-end figure is in 1:6 scale, which normally measures in 12 inches tall. Fox turns 54 on Tuesday. In case you're wondering, Hot Toys is also releasing a 1:6 scale DeLorean Time Machine vehicle, which is set for March 2016 release, Sideshow Collectibles says.

Tim Lammers is a nationally syndicated movie reporter and author of the ebook, "Direct Conversations: The Animated Films of Tim Burton (Foreword by Tim Burton).