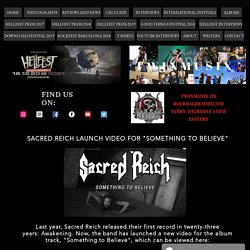 Now, the band has launched a new video for the album track, "Something to Believe", which can be viewed here: Sacred Reich comments: "With the uncertainty that we are all experiencing, we think it's time for Something To Believe. " Awakening showcases everything a fan would expect and hope for from the Phoenix, Arizona unit: a timeless collection comprised of blistering thrash, crushing grooves, meticulous solos, and socially conscious lyrics. The return of Dave McClain, who manned the drum throne from 1991 to 1997, and the addition of twenty-two-year old guitarist Joey Radziwill, alongside original members guitarist Wiley Arnett and vocalist/bassist Phil Rind, are integral facets of the record. 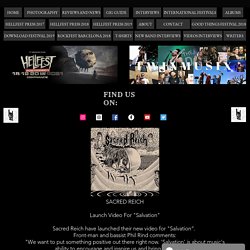 Front-man and bassist Phil Rind comments: "We want to put something positive out there right now. 'Salvation' is about music's ability to encourage and inspire us and bring us together. " "Salvation" is off the band's latest album, Awakening. Watch the video (shot and edited by Fiaz Farrelly) now at:www.youtube.com/watch? "Salvation" lyrics Good times now are here to stay All our cares have gone away Here to feel the energy. Fresh Cuts: New Metal Blade singles - Metal, but Grater. Grater dishing up Fresh Cuts from Metal Blade? 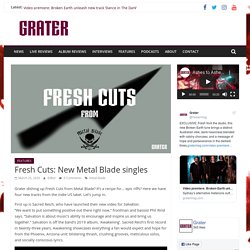 It’s a recipe for… epic riffs? Here we have four new tracks from the indie US label. Let’s jump in. First up is Sacred Reich, who have launched their new video for Salvation. “We want to put something positive out there right now,” frontman and bassist Phil Rind says. Since they first started, Sorcerer have been labelled ‘epic doom’ – a tag that fits but does not define them, and this has never been more evident than on their third full-length, ‘Lamenting of The Innocent’. Sacred Reich. Awakening by Sacred Reich (Album) When you review new releases, it is easy to get caught into the flashy side of things. 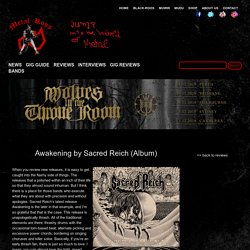 The releases that a polished within an inch of their life so that they almost sound inhuman. But I think there is a place for those bands who execute what they are about with precision and without apologies. Sacred Reich – Awakening (Album Review) Sacred Reich – AwakeningReleased: August 23rd, 2019 Line-up Wiley Arnett // Guitars Joey Radziwill // Guitars Dave McClain // Drums Phil Rind // Vocals, Bass Online FacebookTwitterWebsite If you think Tool fans have had a long wait for that band’s next album spare a thought for Sacred Reich’s long time followers who have been left in the wilderness 23 years. 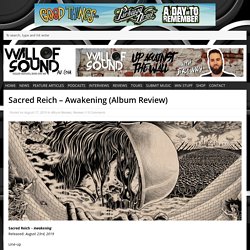 Sacred Reich – Awakening (2019) As a dog person, I’ve had quite a few canine companions over the decades. 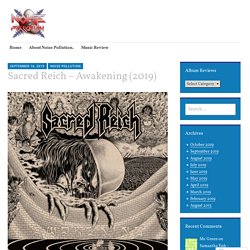 The ones that I have been closest to are the faithful ones, the ones with a bit of mongrel in them, can be assertive when it’s needed and were true to type – no great changes in personality and you could rely on them. The one that stands out was a Jack Russell terrier. He was strong, robust, loyal and one day put a 5 foot goanna at my feet. He took care of business when it was needed and supportive when that was needed. More about that later. Sacred Reich: Awakening. When political times start to get ridiculous, artists tend to stand tall and hold a mirror to all that is going on. 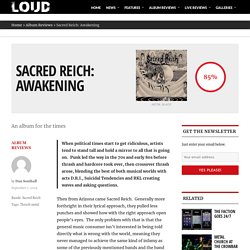 Punk led the way in the 70s and early 80s before thrash and hardcore took over, then crossover thrash arose, blending the best of both musical worlds with acts D.R.I., Suicidal Tendencies and RKL creating waves and asking questions. Then from Arizona came Sacred Reich. Generally more forthright in their lyrical approach, they pulled less punches and showed how with the right approach open people’s eyes.

The only problem with that is that the general music consumer isn’t interested in being told directly what is wrong with the world, meaning they never managed to achieve the same kind of infamy as some of the previously mentioned bands and the band drifted away and eventually went on hiatus as political times changed. Times having now gone full circle, politics seems to have gone mad again. AFTERLIFE ZINE - Sacred Reich Awakening Metal Blade...

ALBUM REVIEW: Sacred Reich – Awakening. What is it with thrash bands coming back from the grave and sounding even better the second time around? 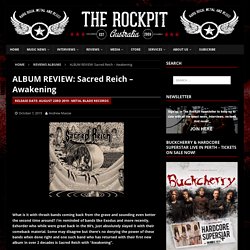 I’m reminded of bands like Exodus and more recently, Exhorder who while were great back in the 80’s, just absolutely slayed it with their comeback material. Some may disagree but there’s no denying the power of these bands when done right and one such band who has returned with their first new album in over 2 decades is Sacred Reich with “Awakening”. The album title is quite fitting in the times we live in but also from the band’s personal point of view with their return from hiatus releasing new songs. It’s been a long time coming, 23 years and counting but it’s been worth the wait after going through these songs. Ex-Machine Head drummer Dave McClain rejoins the band along with a slightly different lineup including new blood from guitarist Joey Radziwill with original frontman Phil Rind leading the way resulting in a fun thrash metal record. 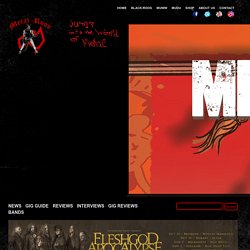 Awakening, the brand new album from Thrash legends Sacred Reich, has dropped on Metal Blade Records and is available from Accompanying the release of their first new album in over 2 decades is the third video for track "Divide and Conquer"; watch here: Awakening has already been met with unanimous praise from the media with Metal Hammer calling it "a steady campaign of mouth-watering riffs and shout-out choruses", Revolver claiming Sacred Reich "prove they're just as heavy and furious as ever" with "a gritty, sludgy take that pushes the confines of thrash itself for a highly unique and fist-pounding experience.

" and Kerrang! Stating "while some contemporary maniacs might roll their eyes at the concept of Buddhist thrash, one listen to 'Awakening's burly, old-school sound will have them along for the ride". Metal Blade Records News: Sacred Reich, Syberia, Angel Witch. SACRED REICH Releases Highly Anticipated New Album, ‘Awakening’ Launches Video For “Divide And Conquer”, SYBERIA Launches Video For New Single, “Empire Of Oppression”, ANGEL WITCH reveals details for new album, ‘Angel of Light’. 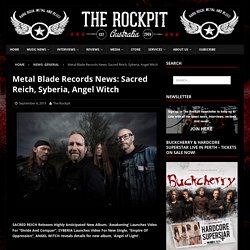 Some choose to trot around playing only the ‘hits’ from their ‘glory’ days, offering nothing new but guaranteeing a good, risk-free time and that’s fine. Others choose to try and show how ‘down with the yoof’ they are by updating their sound to something they think is modern and then mangling their old songs to try and fit their idea of what’s hip… which is very risky and obviously not so good. Metal Blade Records News: Batushka, Cattle Decapitation, Sacred Reich. BATUSHKA Premieres new song & video for “Pierwyj Czas”, CATTLE DECAPITATION Reveal Details of New Album, SCARED REICH Releases Brand New Single “Manifest Reality”. Emerging from the shadows of eastern Poland back in 2015, black metal band Batushka have established themselves as one of the modern era’s most powerful and evocative bands.

Harnessing the fire and fury of arcane black metal and channeling it through the reverberant grandeur of ancient rituals of worship, the band’s debut album Litourgiya stood apart from the extreme metal hordes: a monument to originality, depth and dark mysticism that swiftly cast its spell over the metal underground and beyond. The band recently released its second album Hospodi through Metal Blade. Batushka have just unleashed the fifth track from the album. Check out Pierwyj Czas now! AFTERLIFE ZINE - SACRED REICH Announces Highly Anticipated... Therockpit. The Ocean Collective are back with a beautifully executed noir video. The video captures breathtaking visuals that bring to life the story off their single, “Permian: The Great Dying” from their latest album Phanerozoic I: Palaezoic. Watch it here The story being told visually, shot in India, Indonesia, and Thailand by filmmaker Craig Murray, shows us parallels of the Great Dying and today’s climate crisis.

We see a man on a deserted island becoming encapsulated by a rising ocean, a graven desert, plants regrowing from ashes, as well as lava overtaking the island – referencing the increased volcanic activity that caused the Great Dying. The latest video highlights the albums message in regards to climate change and where we see what life could potentially look like when about 95% of the population is wiped out. Robin Staps discusses the songs lyrics and how this story is told through film. Phanerozoic I is available in Australia via Wild Thing Records. Twinmusix. SACRED REICH Finishes Recording Album And Reveals Split 7” Thrash icons SACRED REICH have wrapped recording on ‘Awakening’, their first studio album in 23 years, which is set for release later this Summer via Metal Blade.

A taste of new music comes via brand new track, ‘Don’t Do It Donnie’, available via a limited edition split 7” vinyl on 19th April, featuring a flipside track (‘They Scream’) from Richmond, VA thrashers, IRON REAGAN. The vinyl will be limited to just 1000 copies, available to pre-order from EMP or Metal Blade’s Ebay Store. Check out ‘Don’t Do It Donnie’ here; Comments SACRED REICH frontman, Phil Rind: “We are stoked to do a split with Iron Reagan. When we began as a band in 1986, we were influenced lyrically by punk bands and the Reagan era, so this is a great way to get back to our roots. Metal Blade News: Lizzy Borden, Sacred Reich, Visigoth, Exumer, Blaze Of Perdition, Ketzer.