Solar Fuels via Artificial Photosynthesis – Wilson Smith - TEDxAmsterdam. TU Delft: Solar fuels via artificial photosynthesis. To ensure a promising future for mankind, we need to find clean, renewable, and sustainable forms of energy production that can be large enough to power the growing global population. 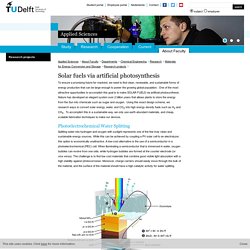 One of the most attractive opportunities to accomplish this goal is to make SOLAR FUELS via artificial photosynthesis. Nature has developed an elegant system over 2 billion years that allows plants to store the energy from the Sun into chemicals such as sugar and oxygen. Using this exact design scheme, we research ways to convert solar energy, water, and CO2 into high energy density fuels such as H2 and CH4. To accomplish this in a sustainable way, we only use earth abundant materials, and cheap, scalable fabrication techniques to make our devices.

Photoelectrochemical Water Splitting Splitting water into hydrogen and oxygen with sunlight represents one of the few truly clean and sustainable energy sources. Several projects exist within the MECS group related to PEC research. 'Artificial leaf' could power communities of the future. The world could one day be powered by photosynthesis from artificial leaves, say researchers from Monash University in Melbourne. 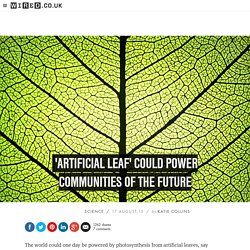 Their system to turn water into fuel, using nothing but solar energy, could be used to run cars, houses and even whole communities. The 'artificial leaf' created by researchers is actually more of a solar-powered device that is able to produce hydrogen with a record-breaking degree of efficiency. The details of the technology, which marks a massive step towards simulating practical, artificial photosynthesis, have been laid out in a paper published in the journal Energy and Environmental Science. The process involves basically splitting up the water by passing an electric current through it, separating out the hydrogen particles so they can be used for fuel. While it sounds expensive, it is apparently cheap to do, and results in one of the cleanest forms of energy, which contains no carbon and produces no carbon dioxide as a by-product.

A Practical Artificial Leaf Begins to Unfold. A new prototype that turns the sun’s energy into hydrogen fuel could point the way to commercially viable artificial photosynthesis. 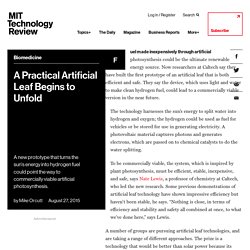 Fuel made inexpensively through artificial photosynthesis could be the ultimate renewable energy source. Now researchers at Caltech say they have built the first prototype of an artificial leaf that is both efficient and safe. They say the device, which uses light and water to make clean hydrogen fuel, could lead to a commercially viable version in the near future. The technology harnesses the sun’s energy to split water into hydrogen and oxygen; the hydrogen could be used as fuel for vehicles or be stored for use in generating electricity. A photovoltaic material captures photons and generates electrons, which are passed on to chemical catalysts to do the water splitting. A number of groups are pursuing artificial leaf technologies, and are taking a range of different approaches.

One Step Closer to Artificial Photosynthesis and "Solar Fuels" Caltech scientists, inspired by a chemical process found in leaves, have developed an electrically conductive film that could help pave the way for devices capable of harnessing sunlight to split water into hydrogen fuel. 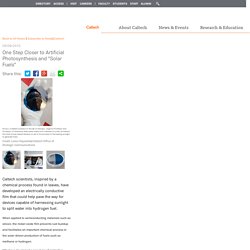 When applied to semiconducting materials such as silicon, the nickel oxide film prevents rust buildup and facilitates an important chemical process in the solar-driven production of fuels such as methane or hydrogen. "We have developed a new type of protective coating that enables a key process in the solar-driven production of fuels to be performed with record efficiency, stability, and effectiveness, and in a system that is intrinsically safe and does not produce explosive mixtures of hydrogen and oxygen," says Nate Lewis, the George L. 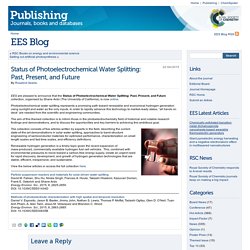 Photoelectrochemical water splitting represents a promising path toward renewable and economical hydrogen generation using sunlight and water as the only inputs. In order to rapidly advance this technology to market-ready status, “all hands on deck” are needed from the scientific and engineering communities. The aim of this themed collection is to inform those in the photoelectrochemistry field of historical and notable research findings and demonstrations, and to discuss the opportunities and key barriers to achieving this ambitious goal. Renewable hydrogen generation is a timely topic given the recent expansion of mass-produced, commercially available hydrogen fuel cell vehicles. View the below articles or access the full collection here. Solar-to-hydrogen efficiency: shining light on photoelectrochemical device performance. Challenging efficiency records of solar hydrogen production. Spectral mismatch between light sources and inappropriate area definitions lead to inaccuracate efficiency measurements © Shutterstock US researchers have raised questions over how the photoelectrochemical community, including themselves, tests the efficiency of solar-to-hydrogen devices.1 Photoelectrochemical hydrogen production is a promising source of sustainable energy but for this to be commercially viable, it needs to be more efficient. 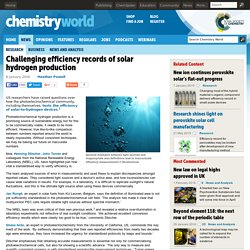 However, true like-to-like comparison between numbers reported around the world is nearly impossible. Without consistent techniques, we may be basing our future on inaccurate numbers. Now, Henning Döscher, John Turner and colleagues from the National Renewable Energy Laboratory (NREL), US, have highlighted just how vital a standardised way to verify efficiency is. The team analysed sources of error in measurements and used these to explain discrepancies amongst reported values. Hydrogen economy. The hydrogen economy is a proposed system of delivering energy using hydrogen. 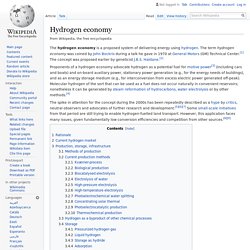 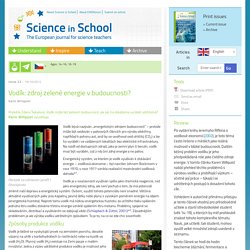 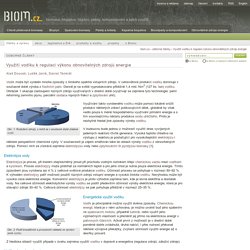 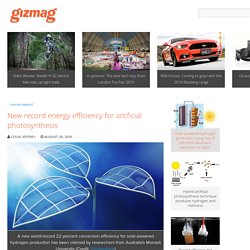 Solar energy is abundantly available globally, but unfortunately not constantly and not everywhere. New efficiency record for solar hydrogen production is 14 percent. An international team has succeeded in considerably increasing the efficiency for direct solar water splitting with a tandem solar cell whose surfaces have been selectively modified. The new record value is 14 percent and thus tops the previous record of 12.4 percent, broken now for the first time in 17 years.

Researchers from Helmholtz-Zentrum Berlin, TU Ilmenau, Fraunhofer ISE and California Institute of Technology participated in the collaboration. The results are published in Nature Communications. Solar energy is abundantly available globally, but unfortunately not constantly and not everywhere. Researchers Tweak Artificial Photosynthesis for More Efficient Hydrogen Production.

A team of researchers from Germany and the U.S. have announced a new record value of 14% for the efficiency of water splitting by solar energy in a single cell. The previous record, 12.4%, was achieved 17 years ago by the National Renewable Energy Laboratory and the value in subsequent experiments with a technology called artificial photosynthesis has hovered around that figure. The researchers published this result last week in Nature Communications. These figures should not be confused with the light conversion percentages of photovoltaic cells, explains Thomas Hannappel of the Technical University Ilmenau in Germany, who was the academic advisor for the researchers. “The percentages refer to the hydrogen efficiency, that is you compare the light energy captured by the photovoltaic cell to the energy that can be supplied by burning the produced hydrogen,” says Hannappel. World's First Solar-Hydrogen Residential Development Is 100% Self-Sustaining. We’ve seen individual homes that are completely off-grid, but there are very few residential developments that have this distinction.

The genius of this project is that it solves problems inherent with solar panels—they only work when the sun is out and can generate more energy than needed. Although the nascent battery industry solves some of these problems, “they are not well suited for long term use,” CNX Construction said. A new method for cheaper solar-energy storage. 01.07.15 - Building on a unique idea, EPFL scientists have developed a cost-effective new method for converting and storing solar energy into hydrogen. Storing solar energy as hydrogen is a promising way for developing comprehensive renewable energy systems. To accomplish this, traditional solar panels can be used to generate an electrical current that splits water molecules into oxygen and hydrogen, the latter being considered a form of solar fuel. However, the cost of producing efficient solar panels makes water-splitting technologies too expensive to commercialize.

The technology of splitting water using solar energy can be divided into the four main topics: photochemical systems; semiconductor systems; photobiological systems; and hybrid and other systems. Concentrated solar energy can also be used for the direct decomposition of water to produce hydrogen. As a result of the great potential promised by solar energy technologies, low cost, high efficiency hydrogen production systems utilizing solar energy are the subject of intense investigation. Artificial Photosynthesis Made Practical. By making a solar photovoltaic material more resilient, researchers may have found a way to make artificial photosynthesis—that is, using sunlight to make fuel—cheap enough to compete with fossil fuels. If you want hydrogen to power an engine or a fuel cell, it’s far cheaper to get it from natural gas than to make it by splitting water. Solar power, however, could compete with natural gas as a way to make hydrogen if the solar process were somewhere between 15 and 25 percent efficient, says the U.S.

Department of Energy. While that’s more than twice as efficient as current approaches, researchers at Stanford University have recently developed materials that could make it possible to hit that goal. The work is described in the journal Science. Abstract: Emerging Semiconductor Materials for Direct Photoelectochemical Water Splitting (228th ECS Meeting (October 11-15, 2015)) Tuesday, October 13, 2015: 11:00 104-B (Phoenix Convention Center) K. Sivula (EPFL) The Lowdown on Solar, Hydrogen and Power-to-Gas. Cars Published on August 20th, 2015 | by Tina Casey August 20th, 2015 by Tina Casey École polytechnique fédérale de Lausanne in is a hotbed of solar research, and this week’s technology tour of Switzerland hooked CleanTechnica up with two of the experts — namely, Professor Michael Graetzel, head of the school’s Laboratory of Photonics and Interfaces, and power-to-gas specialist Professor Kevin Sivula, who heads up the Molecular Engineering of Optoelectronic Nanomaterials Lab.