Hands-Free 'Bionic' Penis In Development. Some men trying to solve their problems of erectile dysfunction can be offered penile implants that inflate their penis at just the push of a button. 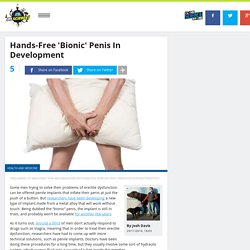 But researchers have been developing a new type of implant made from a metal alloy that will work without touch. Being dubbed the “bionic” penis, the implant is still in trials, and probably won’t be available for another few years. As it turns out, around a third of men don’t actually respond to drugs such as Viagra, meaning that in order to treat their erectile dysfunction, researchers have had to come up with more technical solutions, such as penile implants. Doctors have been doing these procedures for a long time, but they usually involve some sort of hydraulic system, which pumps fluid into a couple of tubes inside the member. This latest hands-free version is, however, relatively new technology. Z nuceného čipování lidí mě mrazí. Tělo a technologie se nesnášejí dobře, říká odbornice. Před 43 minutami Biohacking. 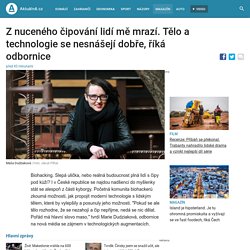 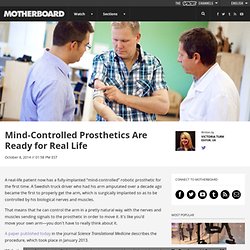 A Swedish truck driver who had his arm amputated over a decade ago became the first to properly get the arm, which is surgically implanted so as to be controlled by his biological nerves and muscles. That means that he can control the arm in a pretty natural way, with the nerves and muscles sending signals to the prosthetic in order to move it. It's like you'd move your own arm—you don't have to really think about it. A paper published today in the journal Science Translational Medicine describes the procedure, which took place in January 2013. While the idea of mind-controlled prosthetics has been around for a little while, and we've even seen prosthetic limbs controlled by the nerves before, the remarkable thing about this prosthetic is how deeply the neuromuscular interfaces are implanted. The device is “osseointegrated,” which means it’s attached directly to the skeleton. NC's first bionic eye recipient sees for first time in 33 years.

As the lights dimmed in the exam room, Larry Hester fixed his gaze forward and waited nervously. 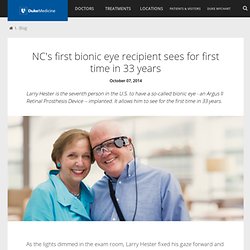 Paul Hahn, MD, a retinal surgeon at the Duke Eye Center, counted backward from three and pressed a button, activating Hester’s newly implanted bionic eye. Hester startled. “Yes!” He said, seeing a light for the first time since he became blind 30 years ago. “Oh my goodness. Hester, 66, was diagnosed with retinitis pigmentosa when he was in his early 30s. But in the intervening years, there has been progress. The device incorporates technology initially developed by researchers then at the Duke Eye Center; its sophisticated features were further enhanced and marketed by a company called Second Sight Medical Products.

Using wireless technology, a sensor is implanted in the eye to pick up light signals sent from a camera mounted on special eyeglasses. Hugh Herr: The new bionics that let us run, climb and dance. Mind-controlled neuroprosthetics. Amputee Successfully Given Implanted Arm Prosthetic for First Time. Meet The 17-Year-Old Who Created A Brain-Powered Prosthetic Arm. Easton LaChappelle’s story offers a reminder of the simplest key to success--if you want something badly enough, do the work and find creative ways to achieve your desired outcome. 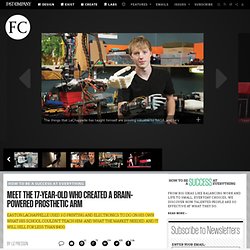 If traditional systems aren’t providing what you need to accomplish your mission, then break away--break away from your 9-5 job, break away from the agenda that’s set by conventional mind-sets. Easton broke away from the limitations of the public education system and taught himself what he wanted to know. For LaChappelle, this meant learning how to build a better prosthetic arm. “I tested a need in the market with a Kickstarter campaign. The need was there, so now I’m working to fill it. Nanotechnology To Outer Space: Ten Top Tech Innovations Of 2014. Don’t be mesmerised by cool apps and flashy new gizmos – the top technology inventions of the year are ones that will have a lasting effect. 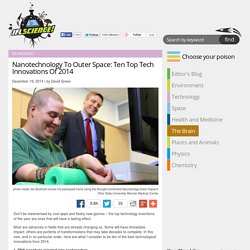 Most are advances in fields that are already changing us. Some will have immediate impact; others are portents of transformations that may take decades to complete. In this vein, and in no particular order, here are what I consider to be ten of the best technological innovations from 2014. 1. DNA nanobots injected into cockroaches Nanotechnology is a growing research field that manipulates materials on a molecular scale. Researchers injected DNA into cockroaches. In February, an Israeli team described devices they made from DNA and injected into cockroaches.